On the surface, a film titled after the hedonistic wonderland of Fire Island Pines wouldn’t elicit hope for much substance or nuance. But Joel Kim Booster’s film about the iconic queer New York resort destination defies predictable assumptions by offering a look at the experiences of marginalized queer folks who flock to the island. Taking on topics such as body image, race, drug use, wealth, sexuality, and love, to name a few, Booster’s Fire Island, which debuts June 3 on Hulu, is packed with heart and plenty of laughs throughout its nearly two-hour run time.

Directed by Andrew Ahn and starring Booster, Bowen Yang, Conrad Ricamora, Matt Rogers, and other out stars, the film has drawn comparisons to Jane Austen’s novel Pride and Prejudice. Booster offers a brief synopsis saying, “It’s a movie about two best friends and their extended chosen family heading to Fire Island to experience love and wonder and fun.”

Writing, producing, and starring in the film wasn’t just a job for Booster, but a celebration of years of hard work. “It was the culmination of everything I’ve ever wanted to do in this industry. My background is in playwriting, and for many years my goal was to write on the next The Wire,” he explains. “It’s so funny that I sort of found my way into comedy haphazardly and accidentally. It sort of led full-circle back to this place.”

Originally sold as a series on the now-defunct short-form mobile streaming platform Quibi, Fire Island eventually found its new home at Hulu. “The secret was to not make [the film] super didactic in the way it talks about a lot of the issues,” Booster says. “It’s a comedy, first and foremost, and the timing of it all was really helpful in getting it made. Bowen’s star was rising, and I think people were really excited to see him in this role. Happiest Season had just come out and had done really well for Hulu, and I started to get some name recognition from Sunnyside. I think it was a confluence of all of these factors coming together and making it the perfect moment to sell this movie.”

Aware of the pressure to create a film that the queer community would embrace, Booster, an official multi-hyphenate, explains that his relationship with Ahn helped keep him focused. “I think for any creator that comes from a marginalized community that isn’t represented often, that pressure is ever-present. It’s the specter that looms over everything we do.
I would be freaking out about something or trying to predict what the response to the movie would be, and Andrew would put his hand on my shoulder and say, ‘Joel, we can’t write this movie for Twitter.’

Booster reflects on the impact of being one of the few queer Asian leading actors in a major studio film by saying, “Bowen and I, and others in the film, are so different, even though we may check the same demographic boxes [for] some producers. I hope this film proves that there’s such a breadth of experience within the gay community and Asian community. I hope that people see how wide and far-reaching these kinds of stories can be [when they’re] told by people like us.”

The entire cast and filming process made the experience one that Booster won’t soon forget. “I feel like I spoiled myself for all future projects,” he says laughing. “Having [friends like] Bowen and Matt there was obviously very special, but even the people that were new to my life like Conrad, Tomás Matos, and Zane Phillips—we really hit a home run with casting. 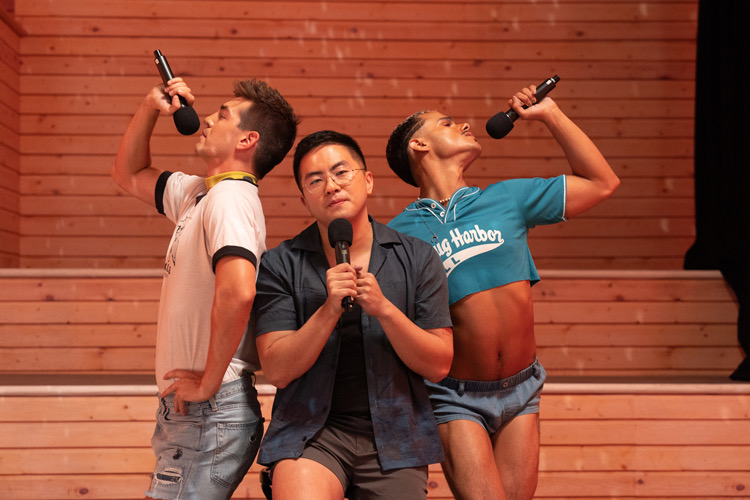 Although the film grabs viewers’ heartstrings and doesn’t let go, it’s also packed with laugh-out-loud moments. “One of the happiest moments I had on set, and one of the times I laughed the hardest while filming, was the Heads Up game,” Booster recalls. “Watching Tomás and Matt [impersonate] Marissa Tomei for what was probably several hours—there’s so much footage from that day, and I hope we can release it as its own featurette. It was a moment where we all started to gel with each other, and it was a really special moment. I turned to Andrew and said, ‘Man, I think we’re making something really good and special here.’ I love that scene so much.”

Booster admits that Fire Island isn’t an all-encompassing story, and he doesn’t expect everyone to relate to it. Still, he hopes fans will feel empowered. “I’m not trying to represent a universal gay experience in this movie.  I’m trying to represent a very specific experience, which is mine and Bowen’s. [The film is] about our friendship, and so much of what happens in the movie and the things that are discussed are ripped from the headlines of our friendship. If people see themselves represented in that experience, then I’m so thankful and glad. And if people don’t, that’s OK too. I genuinely hope that this movie is a success, and that people watch this movie and are inspired to tell their own stories.”