The four gutsy women—including two lesbians—in a 1970s all-girl band are called “the first ladies of rock & roll” in the new documentary Fanny: The Right to Rock, which screens March 18 and 19 at the Museum of Fine Arts, Houston.

“Fanny was the first all-woman rock band that could really play and really get some kind of recognition in the music community,” says Bonnie Raitt, a Rock & Roll Hall of Famer who is one of many music legends who sing Fanny’s praises in the film.

In a December 1999 issue of Rolling Stone magazine, the late David Bowie wrote, “One of the most important female bands in American rock has been buried without a trace. And that is Fanny. Revivify Fanny. And I will feel that my work is done.”

“They had balls,” adds Gail Ann Dorsey, a bassist who played in Bowie’s band.

Director and co-producer Bobbi Jo Hart heeded Bowie’s call several years ago, about the same time that Fanny’s out lead guitarist, June Millington, was being honored for founding the Institute for the Musical Arts, a groundbreaking underground music camp and recording studio for girls and women in the woods near Goshen, Massachusetts.

Out drummer Alice de Buhr, who joined Fanny after Brie got pregnant, also spoke to OutSmart. She reveals in the documentary that becoming the first all-girl band to release a major-label album (Warner/Reprise, 1970) thrust the group into the headwinds of sexism and homophobia.

“Being gay was still a disease back then,” she recalls, “so you could not be [out as a lesbian] in the band. We had to have boyfriends or significant others. The record company did not know what to do with us.”

Alice was the first to leave the band, followed by June. Fanny continued by using replacement members dressed in skimpy costumes. However, by the time Fanny released its biggest hit, “Butter Boy,” the group had disbanded.

“I think Fanny was 10 years too early,” says Alice, who manages the website fannyrocks.com, which is dedicated to preserving Fanny’s history.

Nevertheless, it was a wild ride for a group that almost became the female Beatles. Other high-fives in the film come from Kate Pierson of the B-52s, Cherie Currie of The Runaways, and Kathy Valentine of The Go-Go’s. Among the men who confess their love for Fanny are Todd Rundgren, Charles Neville of The Neville Brothers, John Sebastian of The Lovin’ Spoonful, and Def Leppard’s Joe Elliott. 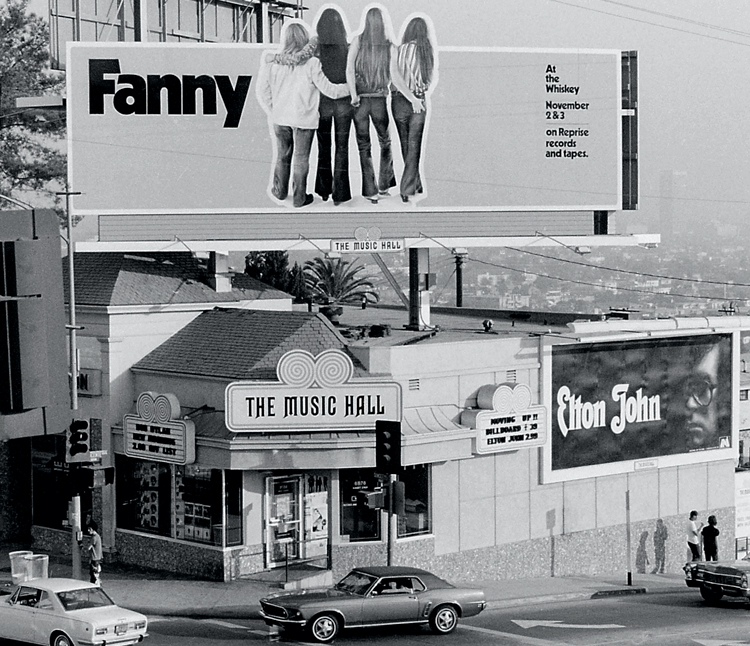 Hart’s film reveals the band’s origin story as a backyard band of teenagers in 1960s Sacramento. In its heyday, the group rented Fanny Hill, a Hollywood Hills home that hosted jam sessions with the likes of Joe Cocker, Little Feat, and Bob Dylan’s The Band.

Alice told OutSmart that her road to rocking and rolling began as a second-grader in a school band in Iowa. In her junior year of high school, she graduated to a small drum kit. Then at 17, she fled for California.

June and her sister started by playing ukuleles, and June progressed to an acoustic guitar. When her sister’s boyfriend let her “jump on” his electric guitar, “It was empowering and liberating.”