Borne of tragedy, Juno’s Hope Dog Rescue and Adoption is now a labor of love.

In 2019, Frank Atchley, a 27-year-old transgender man, rescued a six-month-old Jack Russell terrier mix from Tennessee. Back home in Houston, Atchley and little Juno were soul mates for several months until a speeding truck took Juno’s life on a tragic Mother’s Day in 2020.

But after a period of grieving, Atchley decided he still had more love to share with dogs. A lot of dogs. “I ended up with two more rescue dogs,” he says. “And then more started showing up. I figured four was enough for me, but I couldn’t just ignore the others that needed homes.”

Houston’s Bureau of Animal Regulation and Control (BARC) shelter estimates there are more than one million stray dogs in the city. After Hurricane Harvey in 2017, thousands of strays were rescued from floodwaters. While that’s not an everyday occurrence, strays in Houston are so prevalent that, according to No Kill Houston, 80,000 stray pets are euthanized in Houston pounds and shelters every year because there just isn’t enough room for them—or fosters and adopters to save them.

Clearly, Atchley couldn’t take them all in, so he started Juno’s Hope as a nonprofit to foster as many as possible and find them permanent, loving homes.

Atchley, who is studying to be a paramedic at Lone Star College, grew up in Virginia and has had rescue pups since he was five years old. He’s also been involved in volunteer rescue groups and dog-walking companies for several years. He currently works as the kitchen manager at BUDDY’S, a popular Montrose gay bar. He’s also enlisted his co-workers at the bar to support his foster project.

“They have just been amazing,” Atchley says. “We’ve hosted all of our fundraising events there, including a dog-kissing booth where Johnny and June, two husky mixes, found loving homes. And when the [bartenders] hear about people finding strays, they always give them my card.”

Now one year old, Juno’s Hope pulls dogs from shelters, picks up strays, and occasionally takes dogs that are being given up by their owners. They even check Craigslist for “free dogs” to make sure the animals go to vetted homes and don’t wind up as bait dogs.

“It’s horrible,” Atchley says. “We get about 20 messages a day [on our Facebook and website] from people finding stray dogs. We would say yes to all of them, but we just don’t have enough fosters.” 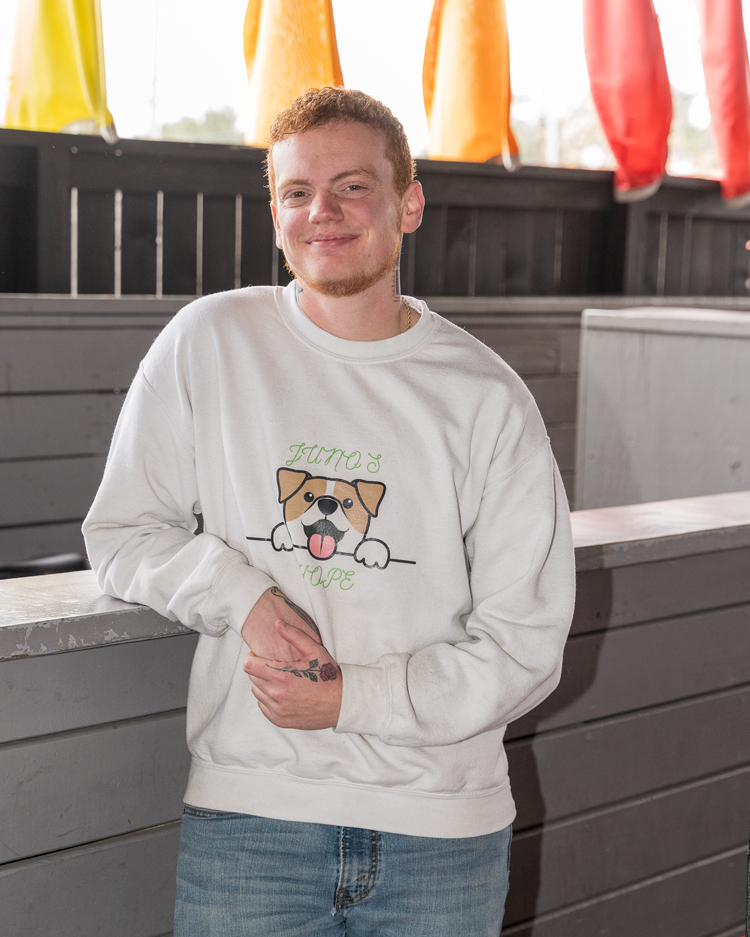 Right now, Juno’s Hope is foster-based and does not have kennel space. But Atchley is hoping to find a permanent space so they can take in more dogs. Foster volunteers and donations are always welcome.

Even with a dedicated board of directors and volunteers, Atchley still finds himself updating the website and doing paperwork at 2:00 a.m. after getting off work at BUDDY’S. But he doesn’t mind since he still has free time to spend in the gayborhood with friends, eating Thai food and listening to live music.

“Yes, they sleep in my bed with me,” he says with a laugh. “Queso loves me so much she sleeps on my face, so I can’t breathe!” Besides being spoiled, they enjoy a healthy diet of dry and raw food—with the occasional treat, of course. “They’re all a bit chunky,” he admits, “so I try to limit the treats.”

Atchley says he isn’t against buying dogs if people shop responsibly. Look for a registered breeder, rather than a backyard operation or pet store. But he would much rather see people adopting rescue dogs.

“It’s hard, but it’s one of the most rewarding things I’ve ever done,” he says of Juno’s Hope. “Rescue dogs are the best breed. When I was growing up, we only had rescue dogs. They will be your best friends for life.”