For most of my years as an adult, I didn’t think of Texas as a place I could live. I left El Paso in 1993 and after college promised myself I’d build a life and career as an out gay man. At the time, Texas didn’t provide that opportunity in the way California, or states in the Northeast, did. Only after three decades, and a major U.S. Supreme Court decision in each of them — Lawrence, Obergefell, and Bostock — did I feel it was feasible for me to create in Houston the life I’d envisioned.

At the time, to be queer anywhere was to be the topic of debate among other people about what it meant to be “a homosexual” in our society. It was to hope every day for a shift in the conversation that might allow us to exist without the constant fear of being outed, fired, or worse. It was to wonder if our allies were dependable enough to help us find greater social acceptance and legal equality.

It took time, but things got better. We started to win protections against discrimination in employment and public accommodations. The internet offered us supportive networks that made it easier to come out and be visible. States began to recognize our committed relationships. The activism we’d learned fighting to survive the AIDS crisis quickened our political momentum. Questions about progress for LGBTQ people shifted from “whether?” to “when?” and “where next?”

In Dallas, Austin, Fort Worth, and San Antonio (cities where non-discrimination ordinances were passed by local lawmakers) it also got better. But the state government, rather than follow the lead of the millions of Texans in those cities, intensified its animus toward us. Time and again, legislators, statewide officeholders, and sundry public officials have invented ways to undermine and limit the rights of queer Texans. They’ve flouted decisions of the Supreme Court of the United States. They’ve introduced and enacted laws that target us for discrimination. They’ve turned on our families. And they’ve preserved outdated statutes that will end our marriages and make us criminals in the very instant they can persuade the newest bench of U.S. Supreme Court justices to agree with them.

The Texas I knew three decades ago was a place that worshipped football, roughnecks, and cowboys just as much as Jesus — dirty boots and pickup trucks the universal totems of its stylized masculinity. Today it’s the same. More here than in any other place I know, homophobia and transphobia are sustained by the misperception that boys who don’t grow into “real men” are defective. It’s still a struggle to communicate what it means to be “homosexual”, transgender, or non-binary when any public expression of our identities presents an implicit challenge to many Texans’ notion of “manliness.” For them, accepting us as equally Texan is to question the virility of the whole Lone Star State.

As a result, homophobia and transphobia in Texas run deeper than mere religious objection. Here, being queer is so foreign to the specific culture of stylized masculinity, even among the areligious, that to acknowledge our humanity would pollute the place — and every trace of us is to be erased because of how profoundly “un-Texas” we’re perceived.

This casual homophobia, endemic across Texas, is why our enemies are so busy here. Bigots angered by progress nationally have willing pawns among the state’s Republican politicians who not only need reliable primary votes from angry bigots, but who also think Texas is already under attack from leftists, who are happy for any chance to denounce whatever seems like “Californication” (California being the gendered antithesis of Texas), and who fear candidates further to the right will call their swagger a swish during campaign season.

It’s why they denounce the books which describe our lives as “pornography,” why they claim banning such books isn’t ideological, why they insist they’re protecting kids, and why they investigate loving parents whose only offense is having trans children. It’s why our allies — rational people, trained professionals, public administrators — don’t speak out on our behalf in greater numbers. It’s why we ourselves negotiate our own public (in)visibility more than necessary.

Every queer person who can live openly in Texas should be doing so. We have a right to be here, and we shouldn’t be ashamed to assert it. In whatever space we occupy, we should be talking about what it means to be a queer Texan. And those of us who are grown-ups have to stop making trans children fight this fight without us.

I’m back in Texas today as an out gay man, living among my family and friends, because people more courageous than I am made this possible for me. And I’m here to pay it forward, because it’s far past the time when any Texan should believe their best life can only happen somewhere else.

Texas is big enough to be our home too. 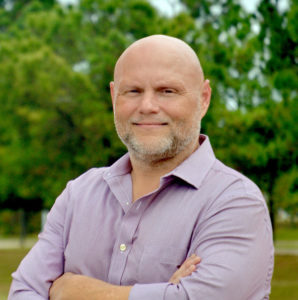 Brian Gaither (he/him) is a gay writer, activist, and finance professional living in Houston Texas. He's been active in politics and has supported lgbtq+ causes in Miami, Seattle, and Baltimore. He served as a Board member of the Pride Center of Maryland, previously known as the GLCCB and is a co-founder of the Pride Foundation of Maryland, an organization that was focused on the state's lgbtq+ history and culture. His writing focuses on the intersection of queer life and politics. He relocated to the Lone Star State in the wake of the Covid epidemic to be near family and close friends. He strongly believes that understanding politics in Texas, and engaging them as a Texan, is critical to achieving the next stage of equality for lgbtq+ people living in America. He attended high school in El Paso, Texas, before going to Cornell University, where he earned a B.A. in History. He has an MBA from the University of Washington in Seattle as well as an M.S. in Real Estate and Infrastructure from Johns Hopkins University in Baltimore. He enjoys tennis, running, and exploring state parks in Texas with his dog, Duke.