Prior to Pete Buttigieg’s official campaign fundraiser in EaDo on May 4, the openly gay 2020 contender dropped by the home of Houston activist Vincent Pryor for a panel discussion that addressed several issues important to black LGBTQ Americans.

When Buttigieg and his husband, Chasten, arrived at Pryor’s residence, nearly two dozen guests greeted the couple with handshakes and hugs, eager to be a part of the conversation.

The meeting with Buttigieg––facilitated by Harrison Guy, co-chair of Mayor Sylvester Turner’s LGBTQ Advisory Board––was an extension of Black Like Us, an annual University of Houston Black History Month event. Members of the discussion panel were all black religious leaders or black LGBTQ persons of faith.

“Part of why I’m spending time [with you] today is to try to have a listening ear wherever I go,” Buttigieg told attendees. “[My team] is taking on board the sense of both the vocabulary and the substance of what our country needs.”

While the 37-year-old mayor of South Bend, Indiana, has been praised for his work in revitalizing his city’s economy, many black South Bend citizens say that Buttigieg’s success was at their expense. The presidential hopeful has also faced some backlash for recently stating that prisoners should not be allowed to vote.

Buttigieg addressed these concerns and more during the panel discussion. 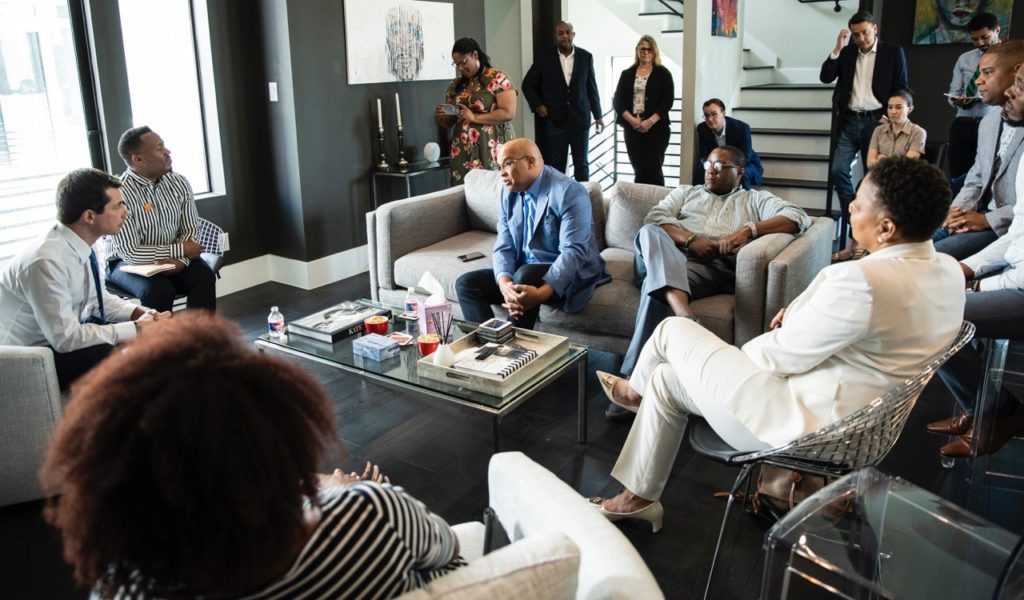 Harrison Guy opened the meeting by introducing himself and the rest of the discussion panel––Vincent Pryor, DeeDee Watters, Marvetta Walker, Darnell Fennell, Leslie Jackson, Shon Stewart, and Jeffrey Campbell. Guy then asked Buttigieg his first question: “What does it mean to be an out, gay, person of faith running for president?”

Buttigieg, an Episcopalian, often shares his religious beliefs while campaigning. He has said that his Episcopal church in South Bend embraced his identity and even married him and his husband in June 2018. But the rise in Buttigieg’s popularity has nevertheless caused some uproar from right-wing Christians. In April, Billy Graham’s son Franklin blasted Buttigieg, stating that he should repent for being gay. At a May 3 campaign event in Dallas, hecklers shouted “Marriage is between a man and a woman.”

“People can understand one of the categories that you belong to, but they don’t always understand how it [can coexist] with another one,” Buttigieg replied. “Every strand of identity that I have, I try to find a way to use it as a bridge to somebody else at that end.”

Buttigieg then went on to discuss the problems with exclusive political alliances, and said that the Trump administration practices “peak white identity politics.”

“Right now, your identity can only be understood as a way to divide you from other people,” Buttigieg said. “Being an unusual combination [of identities] motivates me to be in a position to try to represent [all of them].”

About 40 percent of South Bend citizens are black or Latino. Many of these individuals, especially those living in the lowest-income neighborhoods, are far more likely to be burdened by the cost of housing and to be unemployed, according to a report on the city’s racial wealth divide published by Prosperity Now.

“What are some things you have done as mayor that you are proud of, in relation to the black and brown population?” Guy asked.

Buttigieg noted that in order for South Bend to establish a relationship with people of color, the city’s police department had to better serve these individuals.

“We undertook a number of steps, most of which were successful,” Buttigieg said. “Some were not. Successful ones included [implementing] civil-rights training for police, body cameras, and asking officers to do foot patrols to get to know neighbors during positive encounters.”

Buttigieg said he also worked with South Bend’s black community to reverse examples of symbolic racism. Before Buttigieg took office, South Bend’s MLK Drive was a street with no addresses on it. When black activists informed Buttigieg that this symbolism was racist, he created a new Martin Luther King Jr. Boulevard on “one of the most prominent streets in downtown South Bend.”

“After seeing the reports [documenting the] racial gaps in South Bend, what did you put in place to bridge those gaps, and how will you use that experience [as president]?” Guy asked.

“There is a low detection rate for diabetes in African-American men,” Buttigieg noted, “and many of these men do not get tested because they are skeptical of clinical institutions.” To combat this, Buttigieg supported the Indiana Black Barbershop Health Initiative, an annual statewide event where barbershops host free health screenings.

“There’s a difference between making something available, and bringing something to where it needs to be,” Buttigieg said. “An agenda for black America [shouldn’t only include] things like criminal-justice reform, but also [reforms that address] entrepreneurship, health, education, and home ownership.”

When Buttigieg began exploring his run for the Democratic nomination in January, his campaign went almost unnoticed and his staff was comprised of only a handful of individuals. However, after Americans learned that Buttigieg had some unique qualities—such as being elected mayor at age 29, openly gay and married, a military veteran, a Christian, and able to speak seven languages––he quickly rose in the polls and expanded his media presence. Buttigieg’s current team has grown to 50 people.

“Who holds you accountable when it comes to being an advocate for black lives?” asked Darnell Fennell, a pastor at the Just Love faith community that meets in the Rice/Museum area.

Buttigieg replied that he often looks toward civil-rights activists and leaders in the faith community for advice, and to be held accountable. But he also emphasized that he is still in the process of looking for more people to steer him in the right direction.

“I’m here [at this meeting] to expand the circle of people that can hold me accountable,” Buttigieg said. “I’m looking for people who care enough about this enterprise to tell us where our blind spots are.”

A Plan for Trans Women of Color

Dee Dee Watters, a black transgender advocate, says she was skeptical when Buttigieg first announced his run. She recalls thinking that the fact that he was gay did not necessarily mean he would fight for trans rights.

“Black trans women have faced a long history of anti-trans harassment,” Watters said. “Right now, the government is just gung-ho on us. We say things like ‘seeking justice’ and ‘security.’ Realistically, what would justice and security [for trans people] be with you in office?”

“As a cisgender white male, I get to be a part of that alphabet soup of the LGBTQIA+ community,” Buttigieg said, “but I don’t know the first thing about what it’s like to be a trans woman of color. I do know what it is like to be ‘othered,’ and to be a part of a group that is marginalized. I can at least grab ahold of that when I try to better understand your experience.”

In March, Buttigieg told Ebony that he would stand up for trans women of color, just as progressive politicians from previous generations stood up for him as a gay man. Later that month, in an appearance on Real Time with Bill Maher, Buttigieg said he believed that trans children should be able to use restrooms in schools that match their gender identity.

“The question is about privilege,” Buttigieg told Watters. “The most constructive way to think about criticism is to think about how it allows us to use [our privilege] to help others who don’t share that privilege. I realize that being able to talk [about these issues] like a Midwestern white guy could draw some of the heat off of trans residents.”

At an April CNN town-hall meeting, Buttigieg said that he did not believe that felons should be able to vote while they are incarcerated.

“That sent chills down my spine,” Pryor recalled. “Because what I heard was that you were unwilling to dig into why people of color feel so strongly about this, when we know our criminal-justice system, for hundreds of years, has been [corrupt].”

“I felt like I owed everybody a straight answer [to that town-hall question], but I understand how it might have sounded like it had some edge to it,” Buttigieg said. “It might have made it seem like I am blind to the injustices around.”

Buttigieg then clarified who he believed should be allowed to vote.

“I will continue to be very clear that for the formerly incarcerated, it’s a no-brainer that voting rights should be restored,” Buttigieg said. “There are also a lot of people in prison for non-violent drug offenses who should not be in prison to begin with. When America legalizes [marijuana], which I believe we should, we should also have expungement.

“Our justice system is not just,” he added. “We know the disparities which have happened. I understand the expectation for the next president––especially if that next president is going to be white––to be the most forward-looking we’ve ever had on questions like this.” 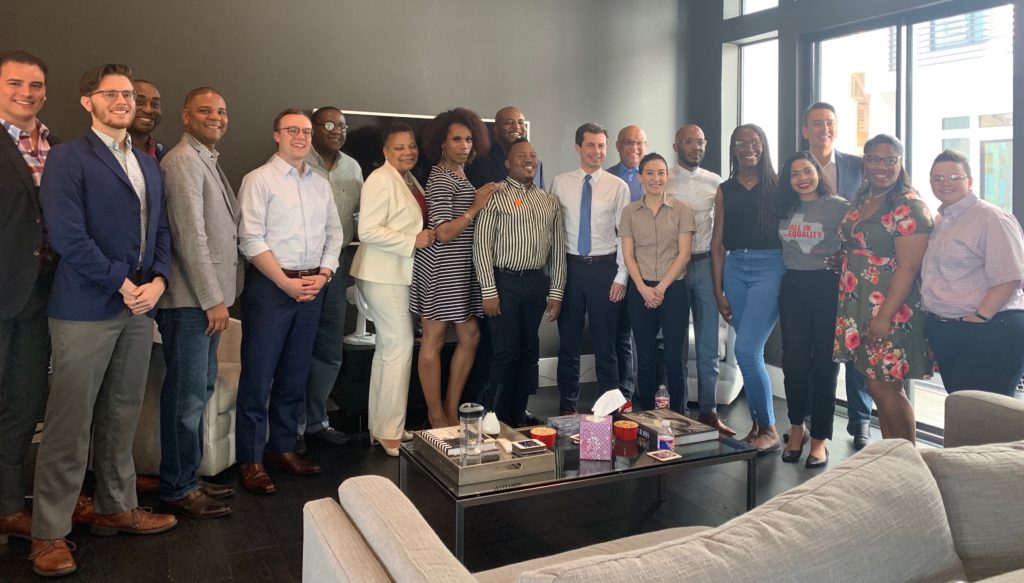 “As black LGBTQ people, we are often faced with choosing a candidate who is the best on black issues or the best on LGBTQ issues,” Guy said. “We would love for you to be a candidate where we no longer have to choose one or the other. I already believe you are a better candidate just because you were here today.”