On Saturday, September 8, The Woodlands Pride organization will host the town’s first LGBTQ festival. The event, which begins at 11 a.m. at Town Green Park, will feature booths from 70 vendors, performances by local and celebrity entertainment, and a children’s zone.

“We may be known as a conservative town, but we’re actually very diverse. The Woodlands’ first Pride will show just that.”

“Folks have been wanting a Pride in The Woodlands for a while,” said Ryan Elkins, director of public relations for The Woodlands Pride. “We may be known as a conservative town, but we’re actually very diverse. The Woodlands’ first Pride will show just that.”

The Woodlands Pride received some initial pushback on social media from conservative community members, Elkins said. However, the town’s elected officials have been overwhelmingly supportive.

The Woodlands Pride was pre-approved by the township in April.

“[Township chairman] Gordy Bunch said that just like any other group, we had the right to organize a festival, as long as we followed the same rules and procedures,” Elkins said. 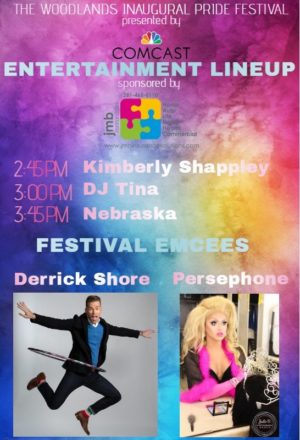 Elkins said the organization is working with local law enforcement to ensure the safety of its guests.

Shortly after The Woodlands Pride organization secured the festival’s location in April, OutSmart spoke to director and CEO Jason Rocha about his plans for the event. Within four months, The Woodlands Pride has gained over 2,000 social media followers, partnered with several local businesses, and secured a big-name sponsorship.

Emceed by Derrick Shore, co-host of KPRC-TV’s Houston Life, The Woodlands Pride will feature a speech by LGBTQ activist Kimberly Shappley. The event will also include a diverse line-up performers, from the Houston Pride Band, to local DJs, to headlining performer Nebraska from Rupaul’s Drag Race Season 5.

“Our main focus is to connect, celebrate, educate and foster relationships in the LGBTQIA community while promoting equality, unity, and love in The Woodlands and beyond,” Elkins said. “We’re inviting everyone to come out and show their love and support for LGBTQ folks. Whether you are in the community or are an ally, we look forward to seeing you there.”

VIP tickets to The Woodlands Pride will feature admission to a VIP area, an open bar, hors d’oeuvres, private restrooms, and a meet-andgreet with entertainers. Following Pride, there will be an after-party at Ranch Hill Saloon, Montgomery County’s only LGBTQ bar.

For more info about The Woodlands Pride, go here.