Pop music’s newest princess, Kim Petras, has had a breakout year. Since releasing her debut single, “I Don’t Want It At All,” in August 2017, the 25-year-old singer/songwriter has garnered millions of streams on Spotify and rapidly deveoped a massive, heavily LGBTQ fan base.

Petras’ popularity in the queer community is in part due to her transgender identity. The native of Germany first gained media attention at age 12 when she began hormone therapy. At 16, Petras made headlines worldwide as the youngest person to undergo gender-confirmation surgery.

Petras has participated in several LGBTQ campaigns, including a September 15 performance at GLAAD’s 2018 Gala San Francisco, which celebrates digital influencers who are moving queer acceptance forward.

Determined to become a pop star, Petras moved to the U.S. in 2014 after struggling to succeed in the German music industry. At the beginning of her U.S. career, Petras wrote more than 600 songs while couch-surfing. Today, she is represented by Britney Spears’ manager and has collaborated with the likes of Charli XCX and producer SOPHIE.

Petras’ partnership with Dr. Luke, her producer (who allegedly sexually and emotionally abused singer songwriter Kesha), recently became controversial after Petras spoke in favor of working with him. After criticism from the #MeToo movement, Petras apologized for her statement, and was supported by fans as well as gay pop sensation Troye Sivan, with whom she is now touring.

Petras will be the special guest when Sivan’s Bloom Tour comes to the Revention Music Center in Houston on September 24.

Lourdes Zavaleta: What was it like to attend your first major TV awards show in August?
Kim Petras: The VMAs were amazing. I’ve always dreamed of going, and I finally got to. I was so excited to see Madonna, who is one of my biggest inspirations. When she got on stage, I freaked out. It was one of the best nights of my life.

Do you plan on releasing your debut album anytime soon?
For sure. I have so many finished songs that I’ve worked on. For now, though, I’m just releasing singles and trying to put out as much music as I can.

Your music seems to get better with each new song release. What inspires these songs?
Anything and everything. I write about conversations I have with my friends, relationships, being heartbroken, and being happy. Every song comes from a different place. I’m always looking to be inspired. I live my life trying to find inspiration.

Does being trans play a role in your music?
It doesn’t play a major role in my music, honestly. I don’t write songs about being transgender. I mainly write about my emotions, which, in my life, don’t have much to do with being transgender. I do love the LGBTQ community, though, and am very proud to be a part of it. 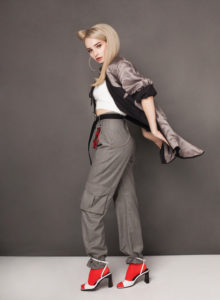 Were you ever told that openly identifying as trans would hurt your career?
Never. Nobody has ever told me that being trans would hurt my career, but some have doubted that a trans person, like myself, could be a good artist. Some religious people have also said that supporting my career goes against God, and I find that to be really sad. I know I have a lot of people to prove wrong, and I’m trying my best at it.

Being an out trans woman makes you an inspiration for tons of LGBTQ people—even some who maybe aren’t out yet.
I hope so. I want those people to know that it’s the best feeling to be yourself. No one should have to conform to what others want from them. I know that can be really hard, especially when someone doesn’t have much support from their friends or family, but there’s an entire community, including myself, rooting for them.

What was it like struggling to break into Germany’s music industry and coming to the U.S. in pursuit of your dream?
It was difficult. When I was 14, I was basically knocking on every producer’s door. I was trying to work with anybody, but no one took me seriously. Not many German acts do English pop, which is what I always wanted to do. I moved to L.A. at 19, had no money, knew no one, but now I think I’m doing pretty good for myself.

Now you’re a pop star on the rise. How does that feel?
It’s amazing. I’ve waited my whole life for this moment.  When people sing my lyrics back to me during my concerts, or fans I meet tell me my songs mean a lot to them, it’s everything.

You tweeted an apology for the comments you made about working with Dr. Luke. How did people receive it?
Most people reacted well, including Troye Sivan, who stuck by me through this. I’m very thankful to be given another chance by people who had every right to have their opinions on the matter heard. I’m really excited to go on tour and show people that I’m an artist worth supporting.

Tell me about the The Bloom Tour. What should your Houston fans expect?
It’s going to be incredible, especially because of Troye—he’s amazing. My set will feature all of my best songs, and some that no one has ever heard before. The show will be full of surprises. I have new visuals and a new vibe altogether. I’m so ready to have the fans see what I’ve been cooking up.

What: The Bloom Tour, with Troye Sivan and Kim Petras
When: 8 p.m. September 24
Where: Revention Music Center
Tickets: Tinyurl.com/PetrasSivanHouston