The mere existence of lesbian comics seems like a political statement these days. Put a few together on stage, year after year, and you have nothing short of a movement.

On September 8, the 12-year-old Queer Queens of Qomedy tour returns to Houston at Neon Boots, with a portion of proceeds benefitting local LGBTQ organizations.

“I created it to give myself a job,” says host and creator Poppy Champlin, who has appeared on Showtime, LOGO, VH-1, Comedy Central, Oprah, and The Joan Rivers Show—where she won the title of America’s Funniest Real Woman.

“The show is always a hit,” Champlin says. “It’s a lesbian comedy fest in your own backyard. It is a great gathering for our tribe—a happy gathering.”

Headlining this year’s show will be the unstoppable Vickie Shaw, a native Texan who was part of Comedy Central’s flagship show Premium Blend. She also stars in Logo’s one-hour comedy special You Can Take the Girl Out of Texas!

Before Shaw was a lesbian comic, she was your “classic” suburban Texas mom.

“Republican women’s club, children’s choir director, and handbell ringer,” Shaw says. “I was a Southern Baptist, straight, white mom doing all the things to ‘make’ me happy. I had to stifle all the feelings I really had. It wasn’t that I hadn’t thought about it. It was just so pushed down and so repressed. I thought I was demon-possessed. So I went to therapy.”

“There is high anxiety right now with the world. We need to relax and enjoy ourselves. This show is always a positive vibration for us to go forth and laugh and relax and breathe just a little easier.”

After hearing Shaw’s story, the therapist looked right at her and said, “You’re going through a time here that’s very difficult. You’re coming to terms with who you are. It’s going to be hard. But you’re handling it very healthily, and you’re fine.” Shaw says she had two words for the world at the time: “I thought, ‘f–k you. I’m not going to live my life trying to please you anymore.’

“I had been taught that God loves me unconditionally, except for that,” Shaw says, adding that she eventually came to realize that “God made me. I am purposely this way.”

Her other major concern was how her children would react. But ultimately, she says it boiled down to “How can I tell my kids to be themselves and not be myself?”

Shaw says she has no regrets, other than hurting her ex-husband. “I don’t regret marrying him. I wouldn’t have my three kids. That was meant to be—it’s all for a reason.”

One thing that didn’t change was Shaw’s sense of humor. Even though people had told her she should be a comedian, Shaw didn’t think she was anything special. “I thought everyone made everyone laugh,” she says. “We all have gifts. Our gifts are something that are easy for us to do, so we don’t realize that not everyone does that.” 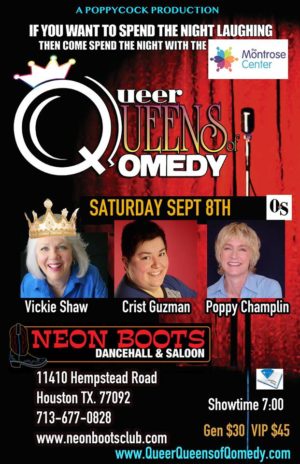 Shaw says she wants everyone to come out to Queer Queens of Qomedy, but more importantly, “I also want everyone to vote. I know I’m preaching to the choir, but we have to vote and get our friends to vote,” she says, adding that she tries to get the word out with a quirky collection of LGBTQ-themed T-shirts. “People say ‘I love your shirt’ and I say, ‘Make sure you vote.’”

Her favorite T-shirt is one with an image of Jesus that reads, “Guys. I said, ‘I hate figs.’” Shaw hopes others will follow her lead. “I want you to wear your T-shirts to Walmart,” she says. But then she adds, “If you’re gonna wear your T-shirt, comb your hair. Pretend you’re going out. You’re representing.”

Comedy is especially important—even vital—right now, Shaw says. “People are hungry. ‘Please make me laugh,’” her audiences seem to be saying. And when she does, they are eternally grateful. “Thank you so much. I needed this tonight,” they tell her. While Shaw doesn’t consider herself a political comedian, she admits that “it’s seeping into my act.”

“You can’t not mention it. It’s on everyone’s mind,” she says. “[There’s] a cloud of hurt and anger and frustration and fear. Fear for ourselves and our country. The politicians, the Republicans, the State of Texas—they want to take gay marriage and adoption and Roe v. Wade. I say in my act, ‘We cannot let go. We thought we had it, but we don’t, and we cannot let go.’”

“There is high anxiety right now with the world,” Champlin says. “We need to relax and enjoy ourselves. This show is always a positive vibration for us to go forth and laugh and relax and breathe just a little easier.”

What: Queer Queens of Qomedy
When: 7 p.m. on September 8
Where: Neon Boots, 11410 Hempstead Road
Tickets: QueerQueensOfQomedy.com