Trixie Mattel is no stranger to overcoming adversity. In fact, the winner of RuPaul’s Drag Race All Stars 3 seems to thrive on it.

Mattel, the drag persona of Milwaukee-born Brian Firkus, tells OutSmart that when she was growing up, her family was extremely poor. Her abusive stepfather called her “Trixie” whenever she acted feminine.

“I’ve never let my life situations influence what I could and couldn’t do,” says Mattel, who is half American Indian. “I take pride in people seeing me as a strong artist, despite everything I’ve been through. But that’s not the label I really want.”

On RuPaul’s Drag Race Season 7, Mattel again faced adversity—though perhaps on a lesser scale. She was eliminated in Episode 4 before being brought back in Episode 8, only to be eliminated again in Episode 10 and finishing in sixth place.

But in the three years since then, Mattel has gone on to become one of the most successful stars in the show’s history. She has released two albums, launched a web series that made its way to cable TV, and most recently won All Stars 3.

“The first time I was on Drag Race, I lost twice,” Mattel says. “I didn’t let that stop me from doing anything that I wanted with my career. I’m living proof that you don’t need anyone to tell you that you’re a winner. You just go out and be one.”

Mattel will bring her guitar, her dark comedy routine, and her Dolly Parton-inspired looks to the House of Blues Houston on June 30 for the final performance of her American tour, “Now with Moving Parts.” She will sing live, make jokes about the current political climate, and lip-sync to mashups of pop songs she’s curated.

Mattel says it’s a 1960s-themed tour featuring creative elements that make it unlike any of her previous performances.

“My past shows were about stand-up [comedy], and there wasn’t as much music,” Mattel says. “This one is more of a hippy ’60s folk-music TV special meets a Netflix comedy special. I love ‘Moving Parts’ so much. I can’t wait for everyone to see it.”

Dumbfounded by her success, Mattel says she never knew she could accomplish so much doing drag.

“I can’t say that I ever thought I’d be famous,” Mattel says. “I started writing songs in my room when I was 13. I’ve always liked doing comedy and performing in drag. Everything I do has always been for my own enjoyment, so it’s nice that there have been cool things attached to that.” 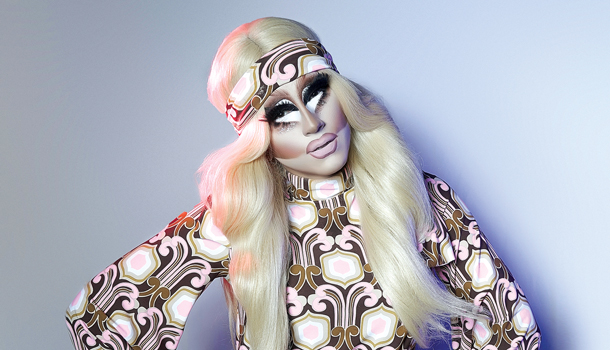 Mattel put herself through college at the University of Wisconsin­-Milwaukee, where she did drag for the first time in a school production of The Rocky Horror Picture Show. Coincidentally, she stepped in for the show’s character named Trixie.

While the style of Mattel’s outfits varies, her face always features overdrawn lips, extremely contoured cheekbones, and large cartoonish eyes. When Mattel first started doing drag, she went only by Trixie, but after Milwaukee club patrons referred to her as “the girl who looks like a Barbie doll,” she added her last name in homage to the toy brand.

Seven years later, Mattel made her debut on Drag Race Season 7. Following the show in 2016, Mattel and fellow Season 7 breakout star Katya Zamolodchikova launched a web series called UNHhhh on YouTube’s World of Wonder channel. World of Wonder is also the name of the company that produces Drag Race. The Viceland cable channel then took an interest in the series and brought the queens to television for The Trixie & Katya Show.

Mattel made her music debut in 2017 with the album One Stone, and followed it up in 2018 with Two Birds. The latter recently hit number-one on iTunes’ Singer-Songwriter chart and Billboard’s Heatseekers chart, making her the first drag queen to become
a country-music star.

Mattel’s music videos feature scenes where she is breaking men’s hearts, both in and out of drag. While she recognizes that creates LGBTQ representation in country music, Mattel says this hasn’t been her goal.

The day Two Birds debuted on the charts, Mattel was crowned the newest winner of All Stars, a Drag Race spinoff series that brings back contestants who placed high during their seasons for a second chance at a position in RuPaul’s “Hall of Fame.” Mattel is half Ojibwe on her mother’s side, making her the first American Indian to win the show.

“It’s called reparation,” Mattel jokes, adding that she grew up feeling mostly white. “There have been just as many people of color who have won Drag Race as there have been Caucasian winners. It’s a show that does
not see color, but rather judges people by their artistry.”

Mattel believes that as the audience for Drag Race continues to grow, fans will start seeing drag as more than just gay men dressing up in feminine clothing.

“I’m not any different than other musicians or comedians who dress up as their personas,” Mattel says. “I’m a man who dresses up in costumes. In the future, we won’t really use the word drag. One day, it’s going to be called RuPaul’s Performance-Art Race.”

What: Now with Moving Parts
When: 7 p.m. on June 30
Where: House of Blues Houston, 1204 Caroline St.
Tickets: tinyurl.com/trixiemattelhouston