All the basics to perfecting your special day.
By Marene Gustin

Thanks to marriage equality for all, many couples that didn’t plan their big day from grade school on are now facing just how to pull together an actual wedding. The good news is that it’s not really that daunting.

Gary Horenkamp, of Human relations by Horenkamp, has some basic tips for the newly engaged. Horenkamp is an officiant, public speaker and life coach who has been performing weddings and life ceremonies in Houston since 2011. He was actually ordained in 2010 in Utah.

“But I didn’t do a lot of weddings there because everyone is Mormon,” he says. When he moved to Texas and started a life-coaching business, his partner suggested he put the fact that he was ordained on his website, and things took off from there.

Horenkamp says Harris County alone has about 30,000 weddings a year—and that was before marriage equality. The most unusual place he’s conducted a wedding was in the Houston Museum of Natural Science at Sugar Land, next to the Hall of Paleontology. “The couple were science nerds,” he says of the setting beneath the T Rex skeleton.

And then there was a recent outdoor wedding where a mosquito landed on the groom’s forehead and the bride swatted it off. Everyone laughed when he said she had just completed her first official act as a wife. Oh, and there was the time the DJ forget to bring wedding music, so Horenkamp had to program his phone while officiating.

Here are his five first questions that every couple need to address before they even book the venue or order a cake.

Tips for Planning Your Wedding Ceremony
By Gary Horenkamp

For most ceremonies, a consent statement from the couple is required by the State. Beyond that, do you want a civil/secular ceremony (no mention of God, Higher Power, spirituality), something with a religious or spiritual component, or both? Do you want something traditional, contemporary, or both? Most judges, JPs, etc. will perform a civil/secular ceremony, but not all clergy will perform one. If you choose to have something religious or spiritual, think about which faith(s), spirituality systems, or traditions you want to honor and include. Most denominations have their own standard liturgies with established guidelines and various options for customization. There are also nondenominational Christian ceremonies (with references to Jesus, but without denominational references) and even interfaith ceremonies (a mix of one or more faiths, or even Pagan or earth-based spiritual spiritual systems.

Will your ceremony include vows, promises, rings, or all of those? If so, do you want to write your own vows, receive samples from the officiant, or simply improvise your verbal consent statement? From those samples, you can make changes and then either read or repeat after the officiant. Writing or speaking on your own can be moving, but given the emotion of the big day, it can also be overwhelming. A good insurance policy is to give a copy of your vows to the officiant, who will have it on hand in a ceremony binder or book.

People to Include in the Ceremony

Besides the two of you and the officiant, do you want to include other friends or family members? Options are the wedding party, a person or people to light candles, sing, or read during the ceremony, carry rings or distribute flowers down the aisle, or handle wedding rituals such as handfasting, the lasso and arras, wine, sand, or candle portions.

Music & Readings During the Ceremony

Whether the ceremony is secular or religious, you might want to include music for the entrance, exit, and at various points in the ceremony—whatever is meaningful to you. The same applies for readings of special texts, poems, quotes, etc.

After the vows, promises, rings, or whatever comprises the body of your ceremony, what do you want to include in the closing? Common features are the exchange of a kiss, some kind of benediction or blessing (especially in religious or spiritual ceremonies) or statement of hope, and an introduction of the newly married couple. Your officiant will want to know how you would like to be introduced, as well as any instructions you’d like the officiant to give after you have exited, such as where the people should move to or who should should remain for photos, etc.

Gary Horenkamp is ordained and vested with authority of the State of Texas to officiate during wedding ceremonies, renewal of vows, commitment ceremonies, baby-naming ceremonies, dedication ceremonies, and funeral/memorial services. He can be reached at 832/797-1616.  Info: houston-weddingofficiant.com 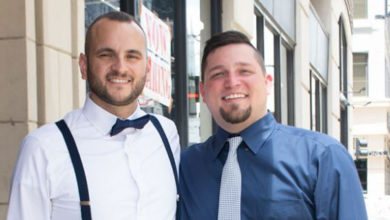