Activism has evolved greatly over the years. Today, savvy social-media users are utilizing their digital platforms to reach the masses and make big impacts in the fight to eradicate HIV and AIDS.

Houstonian Caleb Brown is using his influence and personal journey to educate, inform, and inspire people of all sexual identities about HIV, while at the same time dismantling the stigma surrounding the disease. The outgoing medical professional earned his public-health degree in 2021, and now works in the Baylor College of Medicine AIDS Education Training Center (AETC).

“I was a teacher for eight years and was thinking about leaving the field, but didn’t know what I wanted to do,” the out gay man recalls. “I went to visit my brother in New York in July of 2018. While I was there, I hooked up with someone and got an STI. I went to the clinic and asked to get put on PrEP. They did the full blood panel and later called me and told me to come back the next day.”

Unable to return to the clinic for another two days, Brown ruminated on the news he expected to hear from his doctor. “I went in for my appointment on August 3, 2018, and my brother was with me. The doctor told me I was HIV-positive, and I went numb. I was expecting it, but didn’t want to hear it. My body didn’t know how to process that information, so I went numb.”

Having friends who are HIV-positive with an undetectable viral load, Brown considered the bigger picture. “I wasn’t scared of dying, I was scared of the stigma,” he explains. “I was talking to my brother and told him I always worried that I would end up alone, and this was a concrete reason for someone to tell me ‘No.’ He said if someone didn’t want me because of my status, then they were the shitty person, not me. That completely changed the way I thought about my diagnosis.

“My first post was a video of me taking my medicine and talking about what living with HIV is like. I wanted to normalize it and explain that there was no reason to be scared. I’m a normal person just like anyone else.”

“In September 2018, I opened up about my diagnosis to friends. They asked really great questions, like what being undetectable means and what my medications are like. I started telling people about PrEP, and those conversations led to conversations about getting tested and making appointments to get on PrEP. I realized I was really good at it. I’m a social person and can talk to anyone. I started to wonder if I could make this my new pathway.”

To reach a wider audience, Brown launched his Instagram account @the_positiveotter. “My first post was a video of me taking my medicine and talking about what living with HIV is like. I wanted to normalize it and explain that there was no reason to be scared. I’m a normal person just like anyone else.” Brown’s posts caught fire and his reach expanded outside of his social circles. “Strangers started messaging me, asking about where they could get PrEP, what next steps they should take after getting a diagnosis, or about free clinics in their area. These questions forced me to do the research, and I was glad to do it. It eventually became second nature.”

Along with educating his followers, Brown is showing that an HIV diagnosis does not mean you are no longer desirable. The activist’s Instagram bio reads “Sex Positive, Body Positive, HIV Positive: Showing the world that your value doesn’t change because of your HIV status.” Brown’s account includes his shots of himself in harnesses, jockstraps, and shirtless gym selfies. “I did a spoken-word performance about being HIV-positive,” he explains. “The way I cope is by making a lot of jokes, so I did a stand-up routine in a harness, nipple pasties, and a jockstrap to show that just because I’m HIV-positive, it doesn’t mean I can’t be desired by others.” 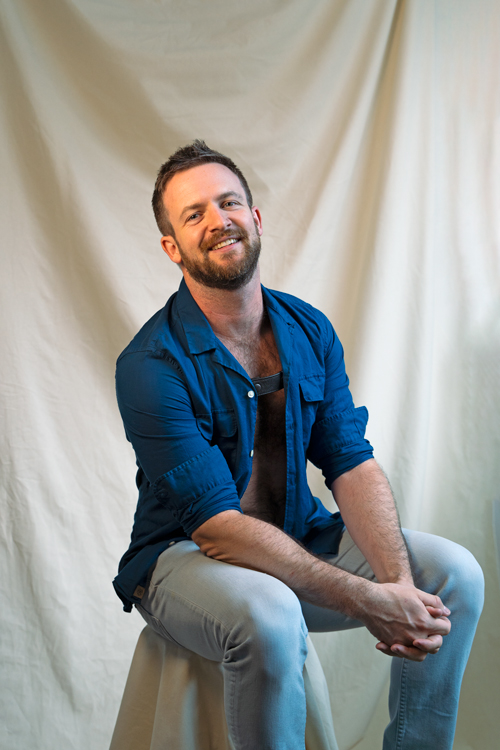 Brown’s sex-positivity stance also means that he is completely open with his partners. “You have to be open about your status and your sexual health,” he stresses. “If I’m going to engage in sex with someone, I tell them I’m positive, undetectable, and I give them the date of my last test. I leave it open for them to talk about their health, and if it kills the mood, they’re probably not someone I should be having sex with. Being open and honest, and getting on PrEP, shows you care about yourself and your community.

“My diagnosis helped me realize I could change [people’s attitude about] HIV by being the face of it,” he adds. “It’s been such an interesting journey, going from that doctor’s office in New York to where I am today.”

Brown explains that stigma is based on fear, which is based on a lack of education. “There’s a misunderstanding about what it means to be undetectable,” he says. “‘Undetectable’  means your viral load is so low that it can’t be passed to another person. That’s the biggest thing people should learn: you cannot contract HIV from someone who is undetectable.” Brown is also vocal about another misconception: “HIV is not a gay disease.”

Today, the former teacher is helping make HIV education and treatment more accessible. “I’m doing program evaluation at Baylor to make sure the educational opportunities that we offer are effective. It’s all to expand the network of HIV health care.”

Looking ahead to World AIDS Day on December 1, the social butterfly shares some effective ways to commemorate the day. “Donate to AIDS Foundation Houston, AIDS Healthcare Foundation, Legacy Community Health—any sort of HIV/AIDS organization,” he says. Pausing briefly, Brown speaks as if he’s talking to a friend, or one of his nearly 7,000 Instagram followers: “If you want to celebrate World AIDS Day, go get tested. If you’re not on PrEP, make an appointment to get on PrEP. Reach out to me if you have any questions. Start talking about it. Talking about it is the only way we will end this epidemic.”

For more information on the Baylor College of Medicine’s AETC, visit aidsetc.org. Keep up with Caleb Brown on Instagram @the_positiveotter.