To make the changes she wanted to see in the world, LGBTQ activist Andrea Segovia learned she had to go out and make those changes herself.

“A lot of it has to do with being a young Latinx queer person who grew up poor,” Segovia admits. “My mom and grandparents taught me that if you don’t go out and get something, someone else is going to. If you don’t take the risk, it won’t be yours.”

Born and raised in San Antonio, Segovia, 26, found a passion for working with non- profit groups during high school. A position at Morgan’s Wonderland, the world’s first ultra-accessible theme park for guests of all ages and abilities, inspired her to continue working for organizations that created safe spaces for marginalized communities.

After a decade in the nonprofit sector, Segovia was recently named the executive director of Gender Infinity, a Houston-based organization that creates gender-affirming spaces for Texas transgender youth and their families, learners, advocates, providers, and educators.

“I look at the youth who attend our camps and conferences, and they’re so confident in who they are. I can only hope that a little bit of that is because Gender Infinity exists.”

Since its launch in 2010, Gender Infinity has presented annual conferences that uplift trans voices and provide an environment to learn about the issues. The group’s 2019 conference featured over 50 workshops with topics ranging from nonbinary medical transitions and intersex issues to spirituality and more. “Some of the sessions are closed and only for trans people. Some are only for their parents, and others are only for providers,” Segovia explains. “However, most sessions are open to anybody.”

In addition to its yearly conferences, Gender Infinity hosts quarterly family gatherings and a biannual camp for trans youth and their families that provide them with fun activities and in-depth discussions. “[The camps] let kids just be kids,” Segovia says. “With other sleepovers and camps, [there are] concerns over being outed or misgendered, but at our camps, that’s not an issue. You can be whoever you want to be.”

Now that Gender Infinity is in its 10th year of operation, Segovia says the group will continue to grow along with the youth who started with it. “[A lot of] the youth that started with us in 2010 are graduating high school or going to college,” Segovia says. “That doesn’t mean that they’ll stop growing with the organization. It means that different conversations about getting older need to happen [to address health and community issues].”

This growth will also include bridging support networks between these families and the broader trans community. Segovia plans on developing a mentorship program that pairs trans youth with a trans professional in areas of specific interest. “We’re really hoping to [emphasize that you can be trans and still] be whatever you want,” she says.

Segovia, who is cisgender and bisexual, says that while she does not face the same obstacles that trans people do, she relates to the alienation that some trans folks face within the queer community. “As an out bi person, I know what it means to feel kind of out of place [among other] LGBTQ people,” she says. “[My work] started to focus specifically on trans people because they’re the most marginalized in our community.”

Segovia hopes that through her executive director position, she will be able to create more job opportunities for trans people, and that eventually a trans person will be hired to lead Gender Infinity. “As an ally, it gets difficult when you’re so close to a marginalized community. [You’re reminded] that you are not part of that community,” Segovia says. “I will never know the struggle that Black trans women face.” 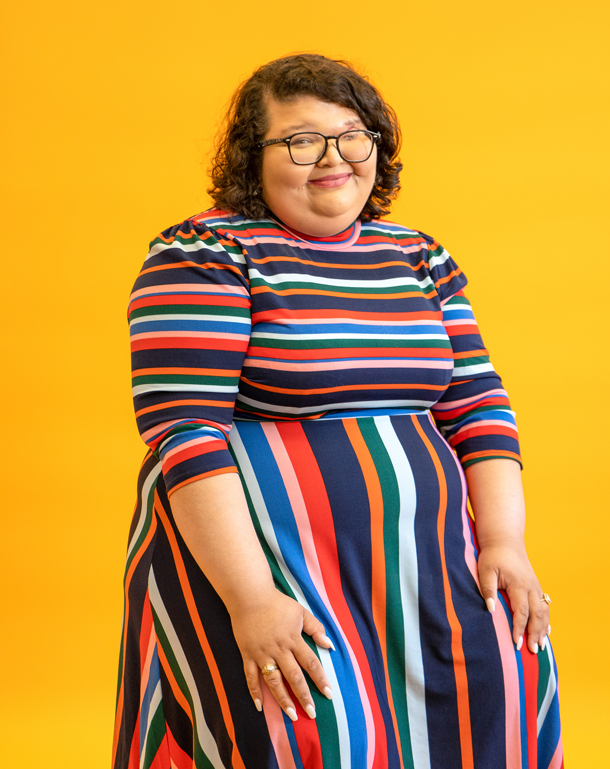 Prior to being named the executive director of Gender Infinity, Segovia attended the University of Houston and began to organize student involvement on campus in support of the Houston Equal Rights Ordinance (HERO). Though the nondiscrimination ordinance was repealed in 2015, Segovia was determined to keep advocating for trans equality, this time with a bachelor’s degree in political science.

Segovia then started working for the civic engagement organization Battleground Texas during the 2016 presidential election. “We were actually able to change the turnout rate of Latinx Texans by five percent,” she notes.

Following the election, Segovia worked as Mayor Ron Nirenberg’s assistant campaign director for a brief stint in San Antonio. During this time, the Human Rights Campaign (HRC) offered Segovia a position as a Houston organizer during the 2017 Texas Legislative Session, an opportunity she says she could not pass up.

The workload she took on was not easy, Segovia recalls. “I worked 18-hour days every day from February 3 until late July. It was the

first time HRC had been in Houston after the HERO defeat, and there was a lot of rebuilding to do. It was nonstop work, [but that experience made it possible] to come into Gender Infinity.”

In October, Segovia became Gender Infinity’s executive director. In addition to her work there, she is also the policy and field coordinator for the Transgender Education Network of Texas (TENT), a statewide organization dedicated to furthering gender-diverse equality in Texas.

TENT is directed by Segovia’s partner, trans activist Emmett Schelling. Segovia says that their mutual passion and respect for each other’s career helps when the workload gets tough.

The other driving force behind her work is trans youth, and the world of opportunities she’s working to create for them.

“I look at the youth who attend our camps and conferences, and they’re so confident in who they are,” Segovia says. “I can only hope that a little bit of that is because Gender Infinity exists. When I’m tired, I really think about the next generation. If I don’t do it—if we don’t do it—what are we setting up for them?”