There is no possible way to describe Lovie Olivia’s art practice in a thirty-second elevator pitch. Performances, cooking, painting, printmaking, community building, and activism are all intertwined within her compelling art practice. As a black queer woman raised in the Montrose area, she happily serves as a terrific point of interconnection among different subsets of both the queer and art communities of Houston. With her memorable Gilligan’s Island name and larger-than-life personality, it seems Lovie is the one member of the Houston art world loved and respected by everyone. I am not alone in finding this artist’s public persona and art objects inseparable.

Her most recent project in Houston was a collaboration with her life partner of three years, Preetika Rajgariah, at Jonathan Hopson’s elegant eponymous bungalow gallery in Montrose. Rajgariah had her enchanting sculptures on view at Lawndale Arts Center while she was simultaneously staging an intimate one-night performance event, Two Dykes and a Knife. Described as a sensory journey of both food and conversation, the artist and her partner’s Southern, African, and Indian cooking cultures were interwoven with curated topics of conversation. The discussions they led were intended to invite vulnerability and closeness among strangers. The handmade place-settings were visually and tactilely lovely, and remained on view for the run of the gallery’s annual Pride show. (Despite being run by a straight couple, this art space takes the queer history of Montrose as a serious point of neighborhood celebration. Their annual June Pride show is something that all Montrose art lovers look forward to.)

While Olivia’s home and studio have vacated Montrose to join the culture-workers’ large eastward migration to the other side of town, she is the ultimate Montrosite, having attended the world-famous High School for Performing and Visual Arts in its classic neighborhood location. At a recent Station Museum panel discussion on the discomforting topic of the relationship between gay men and lesbians, Olivia said she went to the same clubs as the white gay men she befriended. When her other black and lesbian friends would ask why, she told them that she liked the party and the music. It is that spirit of togetherness and collective identity that runs through all of her work. Each stage of her evolving cultural identification drove new types of art-making.

Olivia’s practice frequently involves mechanical printmaking and casting techniques, and her surfaces will become thickly sculptural, with bumps evoking ritual scarification. She freely uses gold leaf to conjure the Italian Primitive painters from the early Renaissance. Frequently using the workmanlike material of plaster, she created a memorable series of small women’s heads in silhouette. The figure’s subtle head movements are posed like a classical ballet dancer’s poses, and the artist’s ability to convey meaning with a subtle change of angle is highly choreographic. For a show at The Horseshed, an LGBTQ alternative space in the United Kingdom, she cast dozens of small gold nipples or clits and ran them around the space like a spell to conjure a lesbian sex party, enlivening a show of wild, queer Texas-based artists.

Yet for Lovie Olivia, traditional figure-painting is always at the heart of how to make visible and comprehensible the queer black and brown women’s bodies she inhabits and loves. When she depicts such beings, she already sees their flesh as a sculptural medium figured through many cultural forces, as well as her artistic and sexual viewpoint.

A large multi-figure painting on a saturated-yellow ground depicts a women-centered space with a plethora of hip women of color creating a personal utopia. A foregrounded figure wearing a shirt, dedicated to Audre Lorde (among other sources of inspiration for queer black women) locates the type of gathering we are witnessing. 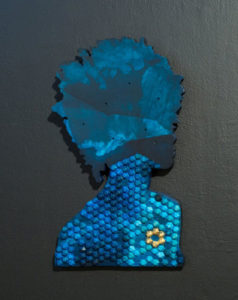 But perhaps her most memorable single painting is Open Carry, in which a shirtless black woman gestures toward us with a harness-like leather strap around her hand. I asked Olivia if, as a native Texan, our state’s pathological love of guns was the topic of the work. She laughs and says, “Honey, you don’t know much about lesbian sex toys, do you?” After explaining the obvious purpose of the device to me (as if I were an innocent), I thanked her.

I am always happy when art teaches me something new, and I can count on Lovie Olivia to further my sexual (as well as cultural) enlightenment.