Peter Bisuito fans could see “Bearilyn Monroe,” “Les MiserBear,” or perhaps even “Beardonna” when the furry comic brings his My Big Funny Peter muscle-drag act to Houston this month.

“You know what, sweetie, that’s my theatrics coming out,” says the beefcake bear in a recent phone interview from his home in Fort Lauderdale, Florida. “Liza Minnelli plus Planet of the Apes equals me. I gotta tell you, I am a song-and-dance man from way back.”

“Liza Minnelli plus Planet of the Apes equals me. I gotta tell you, I am a song-and-dance man from way back.”

Bisuito’s eye-popping costume reveals often punctuate his funny observations about the general mischief that fills the days of our queer lives. For example, he admits, “I thought I would make an excellent psychologist because I’m gay, and I’m really good at telling people what’s wrong with them.”

Four LGBTQ charities will benefit from Bisuito’s appearances, which start with a meet-and-greet at 5 p.m. on October 13 at the University of Houston Alumni Center. That will be followed by Bisuito’s standup show at 7 p.m. at the same venue on UH’s central campus.

The next day at noon, fans can enjoy visiting with the comedian over a fried-chicken brunch at Eagle Houston.

Before night falls, Bisuito hopes to take a dip in the Texas-shaped “lazy river” attraction he’s heard about on the sixth floor of the downtown Marriott Marquis Houston hotel. “I would love to go swimming in that rooftop pool,” he confides.

“We want to take him out running around on Saturday night,” says Tony Fernandez, president of the Houston Bears, which teamed with the UH LGBT Alumni Association to host Bisuito. The alumni group’s president, Kevin Hamby, says proceeds will go to the LGBTQ Student Academic Scholarship Fund, the LGBTQ Student Emergency Fund, the HIV & Aging Coalition, and the Museum of GLBT History Inc. 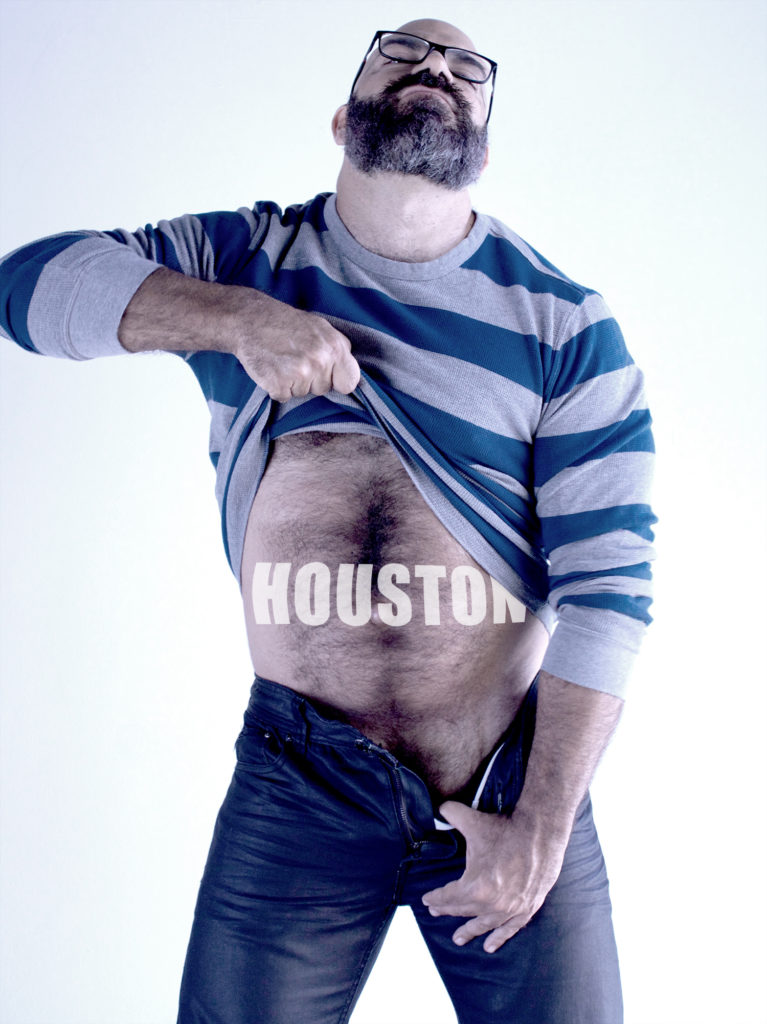 Hamby became a “Big Funny Peter” fan from watching the comic’s videos. “I follow him on Facebook. He’s hilarious. The best jokes are always about yourself and the world you live in. If you can’t laugh at yourself, who can you laugh at?” Hamby says.

Fernandez caught Bisuito’s show at a nightclub on the East Coast. “We actually hung out with him at a pool party, too. His act is hilarious. He did Tina Turner as a nun, in full beard and everything, with backup singers as nuns. He gives a full performance.”

In many respects, Bisuito admits, he’s “a late bloomer.” The native of Rochester, New York, didn’t come out until his 30s; he was 42 when he started doing stand-up six years ago.

“I always had these dreams of becoming an entertainer, but my dad’s idea was for me to go to college and get a ‘college’ job,” he says. “I had job after job after job after job, and it’s not that I was unhappy, but I knew this is what I really wanted to do. I finally had an epiphany—that I don’t have to please my dad. The second half of my life, I want to make people laugh. I gave up my job, my

business, my income. I put myself on food stamps; it was the best decision I ever made.”

Three years ago, Bisuito and his husband, Mark, “a computer geek,” moved from Rochester to South Florida, which opened up massive job opportunities for Bisuito. “I can’t tell you how it catapulted my career; I have performed in front of straight people, gays, bears, senior citizens. Miami is the Hollywood of the East Coast; you never know who you are going to meet here.”

Bisuito’s Houston show will mark his return to stand-up after spending the summer shooting a TV show which he describes as “a gay Laverne & Shirley.”

“I started with the concept of two middle-aged gay men,” he explains. “We got an entire group of people together, and filming it and producing it was an absolutely fantastic experience. But it’s still not quite to my liking—I want to add more ‘funny.’ Stay tuned in the weeks to come, because we are going to reshoot the pilot. The first time, we shot in a friend’s home; the second time, we are renting a professional soundstage and filming it in front of a studio audience. The revival of Will & Grace kind of brought back the old three-camera, one set approach, which went away for a long time, so this is the perfect time.”

Bisuito hopes he’s still on track to fulfill his dream of becoming famous “before I die,” he says. “For so long, I was closeted, repressed, and introverted. I didn’t feel complete. Now, I’m just f–kin’ fabulous.”