Houston’s downtown Discovery Green park, a mecca for outdoor fun, turns 10 this year. To mark the occasion, the park has earmarked 10 of its hundreds of events in 2018 as anniversary celebrations, including the eighth annual Rainbow on the Green set for Friday, June 22.

“It’s one of our most popular events,” says Barry Mandel, the openly gay president and director of Discovery Green. “Last year, we had 3,000 people show up. It’s free, it’s fun, and it’s a time for our community to come together before the big Pride parade. I absolutely go every year.”

In fact, Rainbow on the Green has been such a hit that it spawned two other LGBTQ-themed events during the year—Rainbow on Ice, and Rainbow on the Roll, both skating parties.

A decade ago, Discovery Green was a parking lot overgrown with weeds. Today, it’s a 12-acre oasis of green and calm on the east end of downtown. 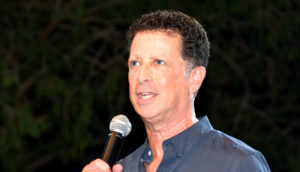 Created and run through a public-private partnership, the park includes a man-made lake, an ice rink in winter, a place to float model boats, a dog run, picnic areas, a playground, an outdoor theater stage, public art, a putting green, bocce courts, and two restaurants.

Discovery Green has also helped generate plenty of residential and commercial development nearby, so Rainbow on the Green will be just a stroll or short bike ride away for thousands of downtown residents. For others, there is Uber, METRORail, and The Wave jitney service. For those who drive, there is an underground garage as well as two other garages next door at the convention center—and street parking is always free after 6 p.m.

Attendees are welcome to bring blankets and picnic baskets, but there will also be food available for purchase.

“The Lake House [a casual Schiller Del Grande restaurant by the lake] will be grilling outside, and we’ll have wine and beer,” Mandel says. “Our partner organizations in the LGBTQ community will also have information booths set up.”

Dogs on leashes are welcome, and attendees are encouraged to bring their kids, as the entertainment is always family-friendly.

“Edward Salles is the best tenor I’ve ever heard,” Mandel says, referring to one of this year’s three featured performers. “I saw him on vacation in Mexico. This will be the first time he performs in the States.”

Also on tap are Deborah Cox and The Patternist. Cox, of course, is the Canadian singer and longtime LGBTQ ally who starred in the touring version of the musical The Bodyguard, and The Patternist’s alternative and indie-pop sounds are rapidly gaining fans.

Finally, there is a bit of good news for female Rainbow on the Green attendees.

“As part of our 10th-anniversary plans, we’ve built a second women’s restroom, and it will be open for the first time during Rainbow on the Green,” Mandel says. “We’re also renovating the children’s playground this year.

“As a native Houstonian, I grew up with Hermann Park, Kiddie Wonderland, and the Bellaire Ice Skating Rink,” Mandel adds. “These places were iconic to my childhood, and that’s what we’re doing here. We’re creating an iconic place for Houston families, and it’s a real honor to do that.”