Ty Herndon’s life has been marked, but not defined by, trials and tribulation. While some songwriters struggle to capture authentically relatable narratives in their music, Ty Herndon’s lived experiences have played out just like any good country song.

Herndon, who shot to stardom with his debut album What Mattered Most in 1995, has taken the lemons life has handed him and made sweet Southern lemonade in the form of his latest album, Jacob, out July 15.

The singer, who became the first male mainstream country star to publicly come out back in 2014 via an exclusive People magazine interview, has been busy promoting his new album on top of his other commitments. “I think this is the first time I’ve sat down today,” Herndon says, laughing.

Reflecting on those early days of choosing to come out to the world, Herndon says, “The gift of singing has stood strong and been protected by a higher power. All this great stuff was happening for me and my career.” Chely Wright, Herndon’s fellow queer country friend and confidante, gave him some much-needed advice: “She said, ‘Let’s talk about how this would look to be free of this burden.’ When she said that, I knew there was a closet in this house of my body that needed to be cleaned out. There was a lot of old shit in there, and I needed to have an update.”

To Herndon’s pleasant surprise, the reception he received was warm and overwhelmingly positive. “Coming out, for me, was a new beginning. I got to be loved by a whole big new family. I remember doing my first Pride festival in LA. They sandwiched me between Fifth Harmony and Megan Trainor, and thought the crowd was going to hate me,” Herndon recalls, laughing. “They didn’t! There were 3,000 amazing people singing along with my songs. With all the hard stuff that’s gone on in my life, I forgot to stop and celebrate the good stuff. Coming out was me understanding I’d done some great things that I could celebrate.”

What followed were years of both extreme highs and life-threatening lows. Herndon, who has long struggled with substance abuse and anxiety, talks about how he recently found himself in a corner in his home all alone, depressed, and hopeless. “For 30 years I wasn’t able to speak to my own story and own my shit,” he says. “It was time. I just wrote a whole record about it. My song ‘God or the Gun’ goes along with that story. We start with the hard stuff and bring in the good news with this album. This record is about changing your ending, no matter how much crap you go through.”

That song informed the rest of Herndon’s album. “I went into this project to write ‘God or the Gun.’ There’s 14 writers on this album, and they had all lost someone to suicide. I sat down next to my baby-grand piano and felt unworthy to write it with them, but we wrote the song in two hours. We finished it and, my goodness, we all went into a full-blown boo-hoo. It was like we were celebrating the lives that made it and grieving the lives that didn’t. It felt like it was meant to be written. 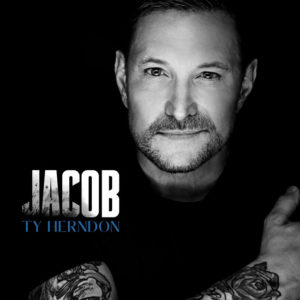 “I was on the journey of sobriety, and was ready for the rest of my blood and bones to catch up with me,” Herndon notes. Having sought treatment throughout his life, including at the J. Flowers Health Institute in Houston, Herndon is once again celebrating a new lease on life with this album release. “I have the opportunity to talk about survival, and how hard it is to get there. I’m on fire for it, because I started getting my life back way later in life! I had a big birthday recently, but I feel 35!”

This 60-year-old understands the road ahead is indeed a long one, but worth staying on. “There are good days and bad days with recovery. Sometimes a relapse saves your ass—it shows you what recovery has done for you, and the work you still have left to do. I work daily to discover what dwells within me.”

While Herndon has been in the Nashville music scene all his life, he still leans on the advice and affirmations from friends about re-entering the world of mainstream country music. “I had to go back to school with this album,” he says of the changing landscape in Music City. “Reba McIntyre told me one time, ‘You’ll always be reinventing yourself. The one thing you can’t reinvent is that light in your eyeballs.’ I feel like when you look at my album cover, for the first time you finally see that light. It’s clear. I’m so proud of that album cover!”

Friends of Herndon have gotten a sneak peek at what’s to come. “My friend Cody Alan was saying he was expecting a sad ballad, but then a dance romp came on and he got off his treadmill and started dancing!”

With his new album and a forthcoming podcast about mental health in the works (with guests including LeAnn Rimes, Alan, and Kristin Chenoweth), Herndon is looking ahead to the next phase of his life as he puts in the work to make sure he leaves the next generation with the resources that he didn’t have. In 2020, he created the Foundation for Love & Acceptance to send a clear message to LGBTQ youth. “I wish that someone had told me that I didn’t have to hide who I was. I tell the kids [at the Foundation] that who you are will be celebrated. I wish someone would’ve connected those dots for me. I get into a lot of visuals with my recovery. We tore down the town that was living in me. It was a ghost town. But we kept the foundation, because the lessons are in the foundation. And anything we build on top of that is gonna be stronger.”