“Shalita had just purchased her home in L.A. when we met. She was renovating a few things that I helped her with,” remembers Aguilar, a women’s MMA former strawweight world champion.

“I bought my house in 2019 in a really hot area,” Grant says, picking up where Aguilar left off. “Since [people live] kind of on top of each other in L.A., having an eight-foot fence in your backyard makes it feel like another room, so I decided to renovate the backyard. It had broken concrete and three different kinds of fence material. I invested $8,000 in the backyard, and used [that money] very wisely. I sold it for $200,000 over what I initially bought it for,” explains the Netflix actress who has appeared in You, NCIS: New Orleans, and Search Party.

Having gotten their renovator’s feet wet in California, it made sense that the two would join forces yet again to work on the Houston home that Aguilar purchased from a family she was close with when her father passed away in 1989. “They found us through the church and became like grandparents to me,” Aguilar explains. “When I moved back, I wanted to move to where I had good memories and felt love.”

Aguilar had purchased the home with the intention of remodeling it for herself, and eventually her mother. But after realizing she and Grant were so interested in world travel, plans shifted. “As a kid, I had so many great memories in that home. The house was super-outdated but well taken care of, so we wanted to pour love into it and leave some good energy for the next family that comes along.”

The couple teases one another when the conversation shifts to their renovation process, complete with funny anecdotes about a “terrible” designer and contractor they initially hired. But nevertheless, Aguilar and Grant’s joy in describing the $70,000 renovation process is clear. “I picked out a beautiful blue color to paint the laundry room, and these guys I hired went behind the garage [and accidentally poured] paint all over it. I wanted to cover it up, so I painted a mountain [with] a heart and I thought it was cute,” Aguilar says, bracing for Grant’s reaction.

When Grant saw Aguilar’s masterpiece, she was in the process of making a dog run. “I shoveled, laid down the black screen, poured mulch, looked up which bark is good for dogs. I was hauling that mulch one day and saw these giant fucking mountains. I said, ‘Jess! What the fuck? Are you fucking high?’” she laughs.

Their four-bedroom, two-bathroom “House of Love” in the Memorial area near Dairy Ashford (originally purchased for $250,000) ended up breaking the neighborhood record for price per square foot when it sold within days for $427,500. “Hiring a good company to sell your home is hugely important. We worked with Alicia Jammer at Compass,” Aguilar notes. “She was responsive and helpful and amazing,” Grant adds. “She gave great advice, produced the marketing materials, and was just incredible.” 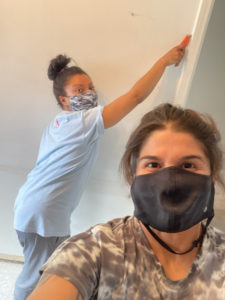 The couple reminisces about the dynamics of working alongside a romantic partner. “We know, as a couple, that it’s us against the problem, not us against each other,” Grant says. The relationship skills they had learned proved vital when it came to working on home renovations. “As a couple, to be successful we have to remember: ‘This problem came into our life, so how are we going to solve it together [without blaming each other]?’”

Today, this talented pair is hard at work completing online interior-design courses while they make plans for their next project—a vacation home and wedding venue in Mexico! “Next time I walk into the cage, I’ll be wearing my toolbelt!” Aguilar jokes about her upcoming MMA events.

The sky’s the limit for Aguilar and Grant, but their home-renovation roots will always be back at their Houston “House of Love.” “When I purchased the home, it felt good to be here. I felt at home,” Aguilar reflects. “When we were selling and letting go of the house, it was bittersweet. We knew we had done everything with love and good vibes. We are so happy that families will use the house and enjoy all of it.”

Keep up with Jessica Aguilar and Shalita Grant on Instagram @jagatt and @shalitagrant.