And there’s a lot more going on in this fictional small Texas town of Rita Blanco: dysfunctional families, arson plots, odd showtune-singing children, xenophobia, greed, lust, more lust, plus some religion to boot. The book is hilarious, and inquiring minds want to know just how much of Here We Go Loop De Loop is autobiographical.

“Well, I’m not in a three-way,” says Sibley. In fact, the gay 69-year-old isn’t currently in a relationship at all. “I get a lot more done with my life being single,” he adds. “But that could change tomorrow. Every time I end up in a relationship, I’m like, ‘Where the hell did that come from?’”

Sibley lives in a historic home in San Antonio and works on the family ranch outside of town—one of three properties he and his siblings inherited from their father. And when he’s not rotating pastures and feeding cattle, he keeps busy as an award-winning author, screenwriter, playwright, freelance journalist, secretary of the Texas Institute of Letters, and a member of the Dramatists Guild and the Writers Guild of America. 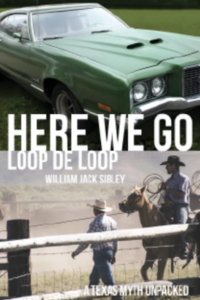 “We grew up around ranches,” Sibley explains. “But when my mother remarried, we moved to upstate New York when I was in the sixth grade.” While that was a cultural shock, Sibley soon found his way by taking the train to New York City to study acting. He returned to Texas to graduate from UT with a degree in film, and wrote his first play in Austin. Governor’s Mansion won the Southwest Regional Playwright’s Competition and was produced at Center Stage. From there, his work was produced off-Broadway and in Burbank, California. He sold a screenplay in Hollywood and wound up staying there for ten years.

He later moved back to Texas to continue writing and ranching. Here We Go Loop De Loop is his third novel, all of which feature gay romances.

“I grew up lying on the linoleum tile under the kitchen table, listening to the adults [talk about] who shot who, and who’s having an affair with who,” he says. When asked if the dysfunctional families in Rita Blanco are based on his own relatives, he laughs. “I’m gonna say yes.”

“Of course, I’ve thought about the movie!” says Sibley. “Tommy Lee Jones would be drunken Mr. Pennebaker, Matthew McConaughey as Pettus, and Gael Garcia Bernal as Chita. And Kate Winslet would be Marty. I know she’s British, but I love her and she’s the perfect age. That would be my dream cast.”

Sibley has already started a fourth novel, but he’s also making time for travel. Currently he’s on a trip to Tunisia with a writers’ group.

“Dreaming of travel is what kept me going when I was young and living with an abusive stepfather in a dysfunctional family,” he says. “I have every issue of National Geographic since 1968.” But he really is a Texas boy at heart.

Here We Go Loop De Loop is available at williamjacksibley.com.