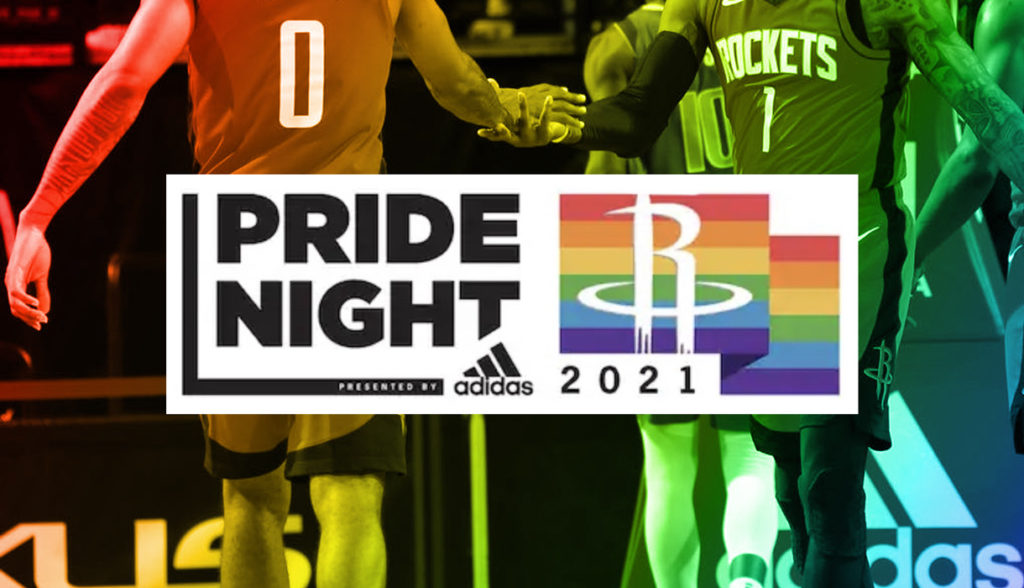 It’s been a long time coming, but Pride Night at the Houston Rockets is finally here. The team’s first LGBTQ celebration will take place at 8 p.m. on Wednesday, April 14, at the Toyota Center, and it’s going to look a lot different than the event that had been envisioned for the 2020 season.

Last April, the Rockets were planning to host Pride Night with a pre-game party, entertainment, and a conversation with Rick Welts, who is the out CEO of the Golden State Warriors. It would have marked the Rockets as one of the few NBA teams to host an LGBTQ-themed event. The Warriors hosted the first such event in 2018.

The Rockets and the Greater Houston LGBT Chamber of Commerce had been planning the 2020 event for about a year, and were excited to bring an inclusive experience to the city and its sports fans. Then COVID-19 hit Houston with a vengeance, and the Rockets’ games—like almost all sports and performing-arts events—had to be canceled.

“We were incredibly disappointed,” recalls the Chamber’s president, Tammi Wallace. “It was just incredibly sad to have to cancel.”

The Rockets’ Pride Night was envisioned as an annual event, so the planning for this year continued—with some major changes. This time, the LGBTQ + Inclusion: Sports + Workplace Panel will be a virtual event happening on the day of the event at 11:30 a.m., featuring panelists from the LGBTQ community sharing their experiences working with the sports industry. At the game, other local community members will be involved with the First Shot for Charity, the National Anthem, and special recognitions. A $25 Pride Night ticket package will include admission, a drink coupon, and a T-shirt. Commemorative shirts, caps, koozies, and socks will be sold at the Team Shop, and there will be LGBTQ banners hung on the concourse, including a recently added banner honoring trans activist Monica Roberts, who passed away last year.

“[The Rockets] have just been so supportive,” Wallace says. “All the way from the front office down.” Team owner Tilman Fertitta’s Fertitta Entertainment company is a Gold Partner with the Chamber. “It wasn’t just ‘Let’s hold a Pride Night and print T-shirts,’” she notes. “They really want to promote the community and be inclusive.”

Like most every professional sports league in America, the NBA currently has no athletes who are out. In 2013, Jason Paul Collins of the Washington Wizards became the first team member to come out in any of the four major male sports. He retired a year later, and no other players have come out since then.

Online tickets are on sale for the April 14 Pride Night, and masks are required except while actively eating or drinking. All sales will be cashless, and the Toyota Center will have a reduced seating capacity to ensure social distancing.

“They are so committed to safety,” says Wallace. “We felt very comfortable working with the Rockets on this.”