Whereas most people see a bug and want to squash it or swat it away, 28-year-old Ruben Salazar and 22-year-old Tristan Erickson, owners of Bug In The Box, see beauty. What makes most people cringe with unease is something they feel quite comfortable with. In fact, they’ve built an entire business around their stylish, handmade shadow boxes that showcase a selection of insects and arachnids from around the world.

The two natives of Humble started their business at home as a labor of love a few years after they first met via Facebook. That connection has now metamorphosed into a six-year relationship—right along with their mutual love for the six- and eight-legged world of insects. 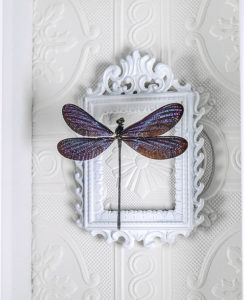 “It came as a hobby. We would go and catch our own specimens [in the large local nature parks] and display them. We have walls full of them. [After making quite a few] plain shadow boxes, we wanted to mix it up and make something more decorative for my mother for Christmas,” Erickson says. “Then we posted Instagram photos and got more than 600 likes, so we realized this was something we could market.”

And market, they did. For three years now, Bug In The Box has been growing. Their home venture has evolved into a 100-square-foot rental space in the Heights, another home studio, and a show space at The Silos at Sawyer Yards. The business has shadow-box contracts with the Houston Museum of Natural Science, MD Anderson Cancer Center, and various stores in the region.

Bug In The Box preserves, stages, and decorates the insects in artistic displays that feature butterflies, moths, dragonflies, beetles, wasps, bees, praying mantises, and scorpions. The insects are farmed mostly from Costa Rica, South America, Asia, and Africa—all ethically and humanely preserved after they have died naturally in farms or sanctuaries. 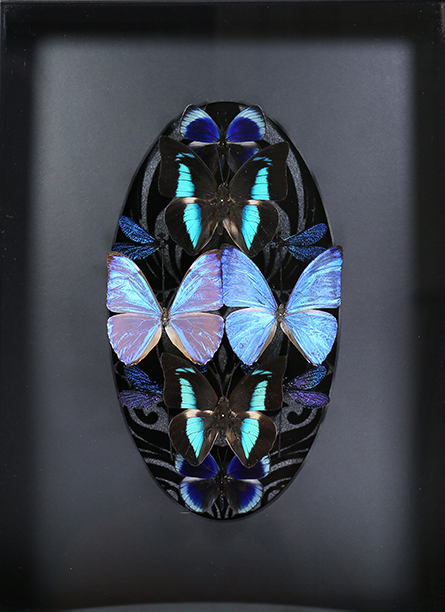 The couple explains that Mother Nature determines the insects’ various life spans. The male praying mantis, for example, lives only until he mates. While that brief life cycle may seem cruel, their beauty can live on thanks to Bug In The Box.

But it’s not as easy as the artistic shadow-box displays make it seem. The process of preserving and transporting the bugs for display is quite a meticulous endeavor in itself. “When the bugs die, they go through a freeze-drying process, so when we get them they’re brittle and dry,” Erickson explains. “We go through a rehydration process for about two to three months, so moisture can absorb back into the bug’s skin. Then we can lay it out, pin it, let it dry, pose it, mount it, and frame it.”

The couple’s growing bug business seems like it should have always been a natural calling. Salazar’s mother was an entomologist (a scientist who studies the classification and physiology of insects), while Erickson’s father taught his young son the ways of nature.

“We’ve caught snapping turtles, red sliders, and even a water moccasin. I ended up releasing it, though,” Erickson admits, explaining that his parents wouldn’t let the snake reside in the house. “But I had bald pythons, poison dart frogs, and even a free-roaming iguana. He had his own room, and a puppy pad where he’d use the restroom. He’d sleep on the curtains. It was pretty cool!”

Although both men grew up with “bugs on the brain” and it all seems normal to them, they still get the occasional raised eyebrow when people first learn about their business. But after seeing the shadow boxes, people begin to appreciate this unique decorative art and its symbolic meaning. 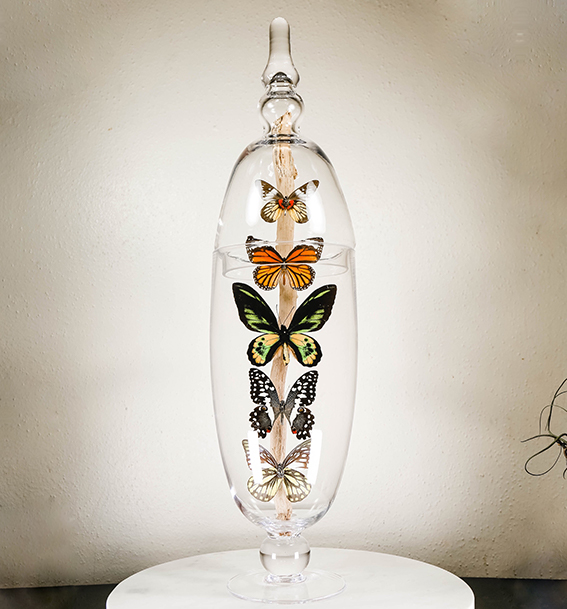 “Customers sometimes say that our butterflies remind them of a loved one who passed away. For example, MD Anderson carries the art in its gift shops, and if [one of their cancer patients] passes, it can be a gift for the family. Butterflies signify new life,” Salazar notes.

Customers sometimes want to have their own pet arachnids preserved—usually scorpions and tarantulas. Salazar and Erickson will happily handle those requests, including picking out specific boxes, backdrops, and any special messages to attach to the box.

Some creepy-crawlers, however, are off the list for Bug In The Box. 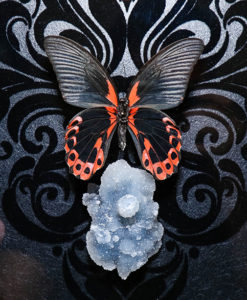 “We’ve had requests for mammals. People want bats. We don’t want to work with guts or blood. I wouldn’t even know how to start with that. Insects aren’t easy, but at least there’s no blood,” Salazar said. “Tristan doesn’t like them, either.”

And even though the couple specializes in dead insects, that doesn’t stop them from enjoying living creatures as well. “We have owned a lot of lizards and geckos, and I had the cutest pygmy chameleons,” Erickson says. “We’ve had dart frogs, leaf insects, walking sticks, and tarantulas.”

Check out Bug In The Box’s creepy-crawliest art on Tuesdays and Fridays from 1:00 to 5:00 p.m., or by appointment at The Silos at Sawyer Yards, 1502 Sawyer Street. Visit buginthebox.net or email [email protected]. Prices range from under $150 to a few thousand dollars.