Although his day job ends in the afternoon, Andrew Edmonson rarely arrives home before 10:00 p.m. As one of the most media-savvy members of Houston’s LGBTQ community, Edmonson freely gives his time and abilities to local organizations that need his help.

The 54-year Edmonson has a broad background in activism and media that have molded him into the valuable community asset that he is today. An innate sense of compassion is what fuels him to take on the numerous responsibilities he has accepted.

Growing Up with a Deep Love for Theater

Edmondson, whose parents were both teachers in Knoxville, Tennessee, was born in 1965. His mother helped high-school dropouts earn their General Equivalency Degree (GED), while his father was a Spanish, civics, and American history teacher who later became a union organizer for the American Federation of Teachers.

Edmonson’s mother was also an Equal Rights Amendment activist. His father would often stand up for the less-advantaged while teaching in Knoxville’s inner-city schools, and he had close black friends—something that Edmonson says was rare for the times in a Southern city.

From an early age, Edmonson had a deep love for theater. In high school, he was the president of the drama club and spent countless weekends in theater competitions. He played the emotionally demanding role of David in David and Lisa during his senior year.

Edmonson realized by age 15 that he was gay, but he was not out at school. His fellow drama students, though, gave him a sense of family.

Following high school, Edmonson chose the University of North Carolina at Chapel Hill. The school had an excellent drama department and a gay student organization, but Edmonson remembers the campus Young Republicans as constant opponents of the club. “It was the age of the Moral Majority,” he says. He was chosen to direct the play Suddenly Last Summer, which features a gay plot. As a 12 year old, Edmonson had been mesmerized by the film version starring Elizabeth Taylor.

Despite his love for the theater, Edmonson became more pragmatic in college and switched his major to English literature. “I just didn’t think I could face [the frequent] rejection and financial insecurity that comes with a theater career,” he says.

While in college, Edmonson traveled to Washington DC to see a display of The Names Quilt. He later went to a rally and heard a thin, angry gay man give a powerful speech. The speaker, he later discovered, was Vito Russo, author of The Celluloid Closet and a leader in New York’s AIDS-activist group ACT UP. For Edmonson, it was a turning point. “I had grown up in a conformist world, and suddenly I was identifying with a group of people who were marginalized, discounted, and ignored.”

When he returned to school, he was given an assignment in one of his honors classes. Each student was told to pick a symbolic object to put in a time capsule, and then write an essay about why the object was important. Edmonson chose a pen from the Names Quilt display that included the inscription “Remember Their Names.” That pen was chosen as the most significant item in the time capsule.

After graduation, Edmonson enjoyed living abroad for six months in London and a year in Dublin. “No one there knew me, and I felt free to come out and be myself. I had come from such a cloistered background, and now my world really opened up.”

In 1991, a friend recommended him for a public-relations position at Houston’s Alley Theatre. The job was a perfect fit: Edmonson had a deep knowledge and love of theater, he could write well, and he was proficient with word processors.

“Here I was, a socialist-in-exile in the midst of the nation’s energy capital. It was so not me,” he laughs. But soon, local events were about to change his outlook.

In July of 1991, banker Paul Broussard was murdered while walking back to his car after spending an evening at Heaven nightclub in Montrose. “I walked on that same street on that same night. It could have been me,” Edmonson says.

The murder had a deep impact on Edmonson, and he became involved in the activist group Queer Nation, which organized a protest march through Montrose. “Queer Nation taught me what it’s like to be an outsider, held in contempt by the larger culture. And they taught me how to be brave,” he says.

A year later, the Republican National Convention was held at the Astrodome. Queer Nation and ACT UP banded together to march on the convention site. Houston Police Department (HPD) officers overreacted by sending officers on horseback into the crowd and beating demonstrators.

Edmonson was used to working with the media, so he organized a press conference introducing several of the victims from the protest. The next day, the story ran on the front page of the Houston Chronicle. “I realized then that I had the skills to help the movement,” Edmonson says.

A year after the incident, the Houston City Council had still not taken any steps to investigate the police attack at the Astrodome. Edmonson borrowed horse costumes and police uniforms from the Alley’s costume department and staged a reenactment of the incident in front of HPD headquarters. “At that time, queers were supposed to be in the closet and keep quiet. Queer Nation helped me channel my anger into in-your-face activism.” 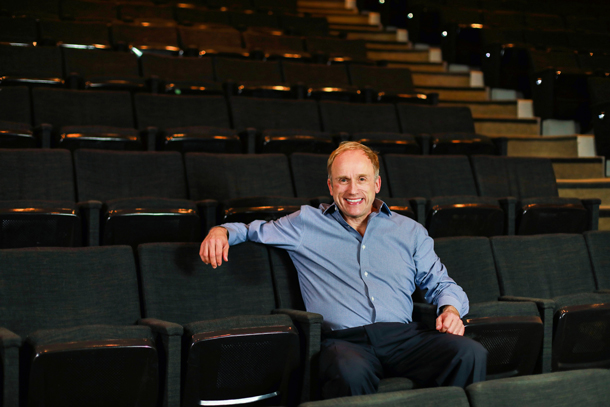 In late 1993, the 28-year-old Edmonson was asked to join the Houston Ballet as their public-relations manager. “It was a huge honor,” he says. “They had just received great critical acclaim for their Company B production, and I loved working for such a great company.” They were also premiering Cruel Garden, a ballet based on Federico Garcia Lorca, a gay 20th-century Spanish poet who was murdered by Spanish fascists.

Edmonson worked for Houston Ballet for the next 21 years. Eventually, his responsibilities were expanded to include marketing activities. For the launch of the company’s successful touring production of Dracula, Edmonson worked with a host of media including the New York Times, USA Today, and Vogue.

In 2014, Edmonson made a career move to the Museum of Fine Arts, Houston (MFAH), accepting a position as membership manager of MFAH Films. He is currently responsible for membership campaigns throughout the year, and for organizing member events. “Providing special events helps to ensure members will keep their subscriptions active,” he says.

Edmonson already had great respect for MFAH Films. In 1991, Marlon Riggs’ controversial documentary Tongues Untied, which gave a voice to gay black men at the height of the AIDS crisis, was rejected for broadcast on public television by Houston’s PBS outlet. MFAH Films obtained a copy of the film and presented it in their auditorium, complete with an audience Q&A session with Riggs via a teleconference connection.

Edmonson’s museum job is clearly a good fit for his skills and values. “MFAH Films provides a platform for freedom of expression for all voices, especially marginalized groups. It treats all people with dignity and respect.”

Giving Back to the Community

Edmonson also uses the media savvy he has developed over the decades to assist organizations that have touched his life. In the early 1990s, he began working with the Halloween Magic organization, which is once again producing an annual variety-show lampoon of current political events.

He was especially interested in Halloween Magic’s monetary gifts to Body Positive, a group that provided companionship and psychological support for people living with HIV. “The productions could raise up to $90,000 to give to worthy beneficiaries.”

Edmonson’s interest in LGBTQ films prompted him to chair the Houston Gay & Lesbian Film Festival in 1999 and 2000. “Films can present positive portrayals, help us learn more about our history, and make us feel less isolated,” he says.

Edmonson’s newest project is working with The oH Project to produce oral histories documenting the AIDS crisis in Houston. He has helped raise awareness of the project through radio and television interviews, articles in Houstonia, Houston Press, and other publications. The Houston Press was so impressed with the project that they awarded it one of their annual Mastermind awards.

Looking back on the worst years of the AIDS epidemic, Edmonson says, “It was like the London blitz, except that there was no place to hide for refuge and safety when the bombs started dropping. We had a government that was apathetic and hated us.”

Now 54, Edmonson knows the Houston media landscape like the back of his hand. He understands media deadlines and how to attract media interest. He can serve as a coach for people who want to to focus effectively when they appear before cameras. And he has kept up with the rise of social media and its rapid evolution. He is a true asset in Houston’s LGBTQ activist community.