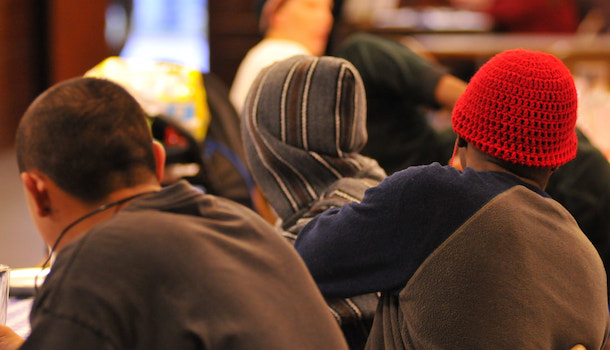 When Amy was 17, her mother kicked her out of their south-side home and forced her onto the streets of Houston.

“It was scary,” recalls Amy, now 23, whose name has been changed to protect her privacy. “Being in an environment that I wasn’t used to, around people I didn’t know, was difficult for me. Homelessness is a lot harder than people expect, especially when you’re a teenager.”

Amy, a bisexual African-American woman, was homeless for nearly three years. She dropped out of Jack Yates High School and would couch-surf at her friends’ homes, or spend nights at Covenant House Texas, a homeless youth shelter.

“Homelessness is a lot harder than people expect, especially when you’re a teenager.”

Amy was referred to Montrose Grace Place (MGP) through a friend, and she began attending their youth night every Thursday until she aged out. MGP’s youth night serves those ages 13–21, regardless of sexual orientation and gender identity, and provides participants with family-style meals, mentorship, activities, and take-away supplies.

“Thursday nights were my favorite,” Amy says. “Not every resource center is like the Montrose Grace Place. On youth nights we got hot meals, clean clothes, hygiene products, and bus passes. The volunteers also sat down to eat with us, and always made us feel important.”

MGP was founded in 2009 by members of Kindred (formerly Grace Lutheran Church) to provide a safe space for homeless adolescents in the Montrose area. However, with the youth nights having a maximum capacity of 25, MGP has regularly had to turn people away.

To meet this growing demand, MGP will kick off its 10th-anniversary year by launching a second youth night on Mondays, beginning January 7.

Courtney Sellers, MGP’s executive director, says the second youth night will also allow the agency to serve those who cannot make it to Kindred on Thursdays.

“Not everyone who needs our services is available to access them just one day a week,” Sellers says. “Many of our youth are still in school and have jobs. Some of the youth who do attend on Thursday nights need more resources. We want to be there for all of them.”

Sellers noted that youth night attendees are primarily people of color between the ages of 18 and 21. Only 30 percent are white, and 50 percent of MGP’s clientele identify as LGBTQ. 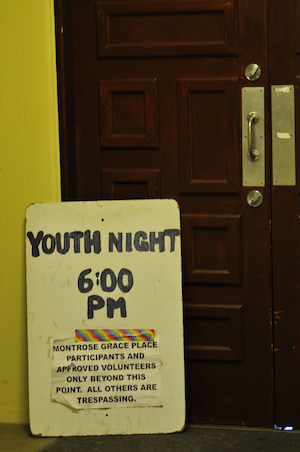 Deb Murphey, a youth program manager for the Montrose Center, assists in connecting homeless youth to services in Houston. Murphey says MGP’s second youth night will give kids another chance for not only a hot meal, but also to be part of a community.

“Homelessness can be very lonely and difficult to manage,” Murphey says. “I applaud Montrose Grace Place for extending their services.”

At youth night, around 20 volunteers eat family-style dinners with attendees. The food they share is almost always home-cooked and donated.

“We always talk to the youth to figure out what they want to eat,” Sellers says. “We try to serve everything that they ask for. Our dinners have consisted of pizza, sloppy joes, chicken, and Chinese food. We mainly stick to home-cooked meals, but they’re teenagers—sometimes they just want take-out.”

After the meals, youth and volunteers participate in activities ranging from bingo to songwriting. In October, Houston drag performers Blackberri and Cyn City judged a fashion show where the youth were runway models.

Before guests leave the youth night, they are given items to meet their immediate needs such as snacks, toiletries, and bus passes. The youth are also welcome to take clothing from MGP’s closet of donated clothing.

Those who arrive after youth night has reached its capacity are sent away with food and bottled water.

Although MGP has no plans to become an overnight shelter, Sellers says she hopes the organization can add even more nights to better serve youth like Amy, who now has her own apartment where she lives with her 2-year-old son and 3-year-old daughter. She works in retail at the Galleria Houston and is studying for her GED.

“A lot of people will benefit from a second youth night,” Amy says. “I know many who need their services and wish that they had more of them.”