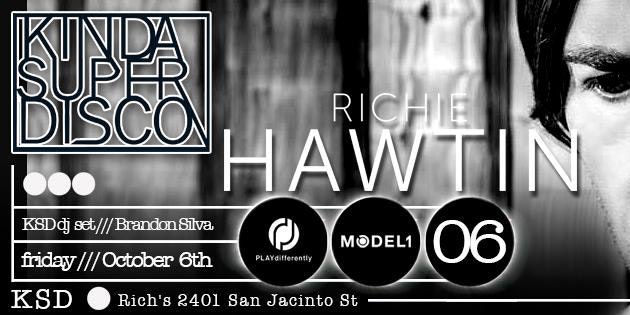 In the wake of the disaster of Hurricane Harvey techno maestro, Richie Hawtin has teamed up with the Houston based electronic event Kinda Super Disco. October 6th at Rich’s, KSD will host an event with a performance by Richie Hawtin in efforts to ease some of the burdens Houstonians must now bare.

Please join us in helping feed these displaced peoples in the best way Richie and KSD know how, celebration!”

KSD is amazed to bring the dark prince of Techno. A true living legend. He has earned his rightful place in the annals of electronic music. His critical acclaim spans the creative realm of the fine art community to the technological vanguard. Meanwhile, as a performing artist, he is constantly pushing conceptual frontiers, moving things forward, welcoming as many as he can to ideas and experiences that would have seemed pure science fiction when he began his career.

British-born and Canadian-raised, he is the business mind behind Plus8 and MINUS Records, nurturing a plethora of talent from Speedy J in the early 90s to Gaiser in the 2010s. And, of course, he is Plastikman, perhaps that most of all, electronic musician par excellence, maintaining an underground agenda of avant-garde electronica over six albums (and two compilations). Enter…..