During the surge periods of the pandemic, when many of the nation’s elderly were languishing without proper care or attention, one forgotten community was celebrating immortality, posing on the sets built in their honor for glamorous photo shoots throughout the country. 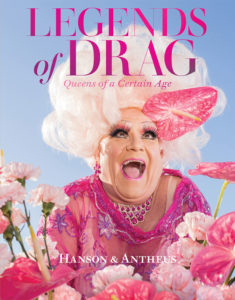 These 81 subjects of the new book Legends of Drag: Queens of a Certain Age were finally claiming the honor that they had long fought for after enduring lifetimes of homophobia and transphobia, societal and familial exile, AIDS, and beyond.

Created by Devin Antheus and Harry Hanson, Legends of Drag looks at the uncharted history of American drag that developed in the parlors, parties, dens, and nightclubs once lost to the ages, recalled now by their greatest acts.

Among the elders honored in the book is Dina Jacobs, Houston’s grande dame of drag who debuted in 1964 and still performs all over the country. “As I was considering Texas models, Dina was always at the top of my list,” Hansen tells OutSmart. “You look at her, and you see she’s a star. That face—hello? She looked like a queen who had stories to tell. Younger generations—even younger queens who are in the book—look up to Dina as a legend. Legends inspiring legends.”

As both Legends of Drag and Larry Ponder’s 2020 biography Forever Her Mother’s Son recount, Jacobs grew up in Hawaii during an era of rapid modernization and intense backlash. Indigenous Hawaiian culture honored māhū, a class of priests and healers who existed outside the norms of traditional masculine and feminine gender assignments. As Dina discovered drag, she found a lineage of new mothers and mentors who could instruct her in the art. But it wasn’t for the faint of heart. “There were drag teachers back then,” Jacobs notes. “There was a pecking order, so you knew where you stood. There were rules, and you had to abide by them.”

The queens had to be hard, since men performing in drag at the time were forced to wear signs saying I AM A BOY—making them targets for cruel and corrupt vice officers. As Jacobs shares in Legends of Drag, “The cops were really ugly to the drags, but there were some cops who were going with the drags at the same time. As long as nobody saw, they were good with it. I want people to know what we went through in the ’60s, because it wasn’t just my life. We were fighting all of this bigotry before Stonewall.”

Hawaii would become the launching point for Jacobs’ career that spanned continents and garnered over 70 titles including Miss Gay Chicago 1975 and Miss Gay USA 1981. The blatant transphobia she experienced in Hawaii was no less severe in 1981 when, at the Miss Gay USA pageant, Jacobs was ousted from the top five for refusing to don male attire for the show’s interview portion. Decades before similar controversies would reverberate on RuPaul’s Drag Race, Jacobs faced the consequences of proclaiming herself a proud trans woman.

As gay culture shifted and morphed, she collected a vast spectrum of experiences. She recalls with pride how she supported herself and her sisters through the AIDS crisis, sang “Lucy in the Sky with Diamonds” live before a young RuPaul and Lady Bunny in Atlanta, and returned to Hawaii in 1999 to help raise her nieces and nephews.

By the time Jacobs settled in Houston in the late 2000s, her legendary status cemented, she was still just warming up. “I still get nervous every night before I go onstage. I still do.”

In the expansive new world order of drag, there are more opportunities than ever for younger queens—but perhaps at a cost to authenticity, rigor, and professionalism. “Honey, back in the day these girls couldn’t make it!” she laughs. While “attitude” is a given for queens of any age or era, Jacobs notes that when she was coming up, drag elders were to be listened to. Now, it seems, “when somebody tries to school them, they get defensive. These [younger] girls have families, but their families are not teaching them anything.”

Perhaps, then, Legends of Drag will serve as a resource and guide for a younger generation in need of perspective. Jacobs was most impressed that Antheus and Hanson only feature contemporary photography of the subjects, glorifying their power now more than ever. After reading the testimonies of performers from Atlanta, New York, Milwaukee, and far beyond, she was surprised by the vast range of experiences they’d had. “Everybody’s start is different. We think just because we’re girls of a certain age, we have the same start. But we don’t.”

Following the launch of Legends of Drag in June, a nationwide tour is assembling the featured queens to perform all over the country, fostering what Hansen describes as “an intergenerational exchange” and creating “a platform for these queens to share their work with a broader audience—and to get them paid.” Of course, Jacobs has been locked and loaded since day one. “Dina basically told us, ‘If you’re doing events, anywhere in the country, let me know where you need me, and I’ll be there.’ There’s this mainstream perception of drag that queens touring the country is somehow a new phenomenon; the rubric prescribes that you have to get on TV first. Dina turns that paradigm on its head: she’s been touring the country since the ’70s, and she’s still doing it.”

Does that mean Jacobs is ready for some screen time? Hell yes. “I want to do television. I want to be on a series!” Could it be that, after over five decades in the industry, we haven’t yet seen the prime of Miss Dina Jacobs?