When Max Fields was invited to curate this year’s Ten Tiny Dances for CounterCurrent, the annual contemporary art and performance festival put on by the University of Houston’s Cynthia Woods Mitchell Center for the Arts, he knew he wanted to take it in a different direction from the previous years’ showcases of contemporary choreographers’ work.

“We’re definitely saving a place on the dance floor for everyone.”

He did, however, have a relationship with musicians and the performances that take place in dance clubs. He knew Karen Farber, executive director of the Mitchell Center, had an interest in social dance. From there, Ten Tiny Dances: Nightlife was born, to be presented at Rich’s Houston nightclub on April 9.

It was a different sort of curatorial process. Whereas stage dancers and choreographers are used to communicating via email and writing proposals and applications for festivals, the performers Fields was after communicated via text message and with much less formality. As someone from the contemporary-art world, he knew his first task was to build trust with these performers who worked in a whole other realm. 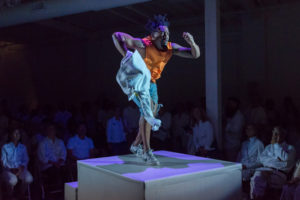 “People who dance in clubs don’t need the validation of the art world to make their work,” he explains. “They don’t need to be on a stage or in a museum. Everyone who is participating in this project had to create space for themselves in this world and for their expression.” These performers have made their own spaces in dive bars and warehouses. Finding them and starting the conversations with them required networking and word-of-mouth more than putting out calls for performers in art circles. “It’s been meeting people through people and getting vetted. ‘Is he cool? Is he okay? Can I trust this person?’”

Fields is proud of the program he’s assembled. “The lineup is not comprised of people just from Texas or Houston” he says. “The lineup includes dancers, club icons, deejays, and more formal artists whose work is informed by nightlife and club culture.” He wanted to have these different types of performers rub up against each other because they each approach their work from different angles. “I’m really interested in the gesture as an archive. I’m interested in how the flick of the wrist is performed over and over, and each time it’s performed by a different person, that history is embedded within that move. Artists look at that one way, deejays look at it another way, club kids look at it a completely different way.” Fields continues. “But they all think about it.  Everyone is thinking about how their culture is transmitted through gesture, through dance, through movement.”

By way of introducing the lineup, Fields focused on three performers or groups—one from Houston, another from Texas at large, and one who is a more traditional artist engaged with the art world.

From Houston is Neon Mavericks, a competition dance group based at the country and western club Neon Boots Dancehall & Saloon in northwest Houston. They’re going to present a choreographed history of the famous dance hall that once featured Willie Nelson and Patsy Cline. Their performance will showcase the evolution of the club into a modern-day center of LGBTQ country and Tejano culture. 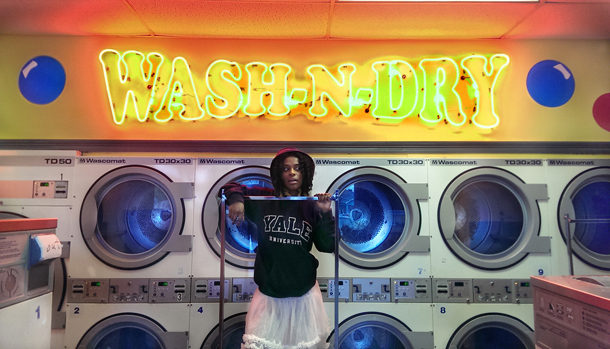 Hailing from San Antonio is the House of Kenzo, a group that is often associated with voguing and ballroom styles of club performance, but are expanding and creating a distinct vocabulary of its own. They’re pulling from influences as varied as ChicanX, blues, and deejay cultures, as well as styles they’ve picked up from traveling to other cities. “It’s very queer,” Fields says. “I have a hard time trying to pin them down, to hold their identity to a single word.”

Working within the more traditional art world is Devin Kenny, who is currently living in Houston as part of the MFAH’s Glassell School of Art Core Residency Program. Originally from Chicago and educated in New York City and Los Angeles, Kenny’s work explores coded communications found in such cultural artifacts as quilts from the Underground Railroad, graffiti, and Internet memes. For his Ten Tiny Dances performance, he’ll be exploring the juxtaposition of black music and culture’s infiltration into mainstream media against the constant stream of news stories about police brutality directed at black and brown bodies.

These disparate styles (and more) will all be presented at Rich’s Houston, a nightclub with its own long history in the city’s nightlife scene. Again, via connections and networking, Fields was able to secure Rich’s as the site for this year’s Ten Tiny Dances. Following the performances, the audience is invited to stay for a dance party with a set from the Houston dance-pop group Wild Moccasins.

Summing up what he hopes for the evening, Fields says, “This project wouldn’t be successful if people didn’t come out and dance. We’re definitely saving a place on the dance floor for everyone.”