Even if you are not a fan of TV talent show competitions, sometimes they get it right and manage to introduce an artist who is worthy of your attention. Calum Scott, who was a finalist on Britain’s Got Talent (he finished sixth) is one such example. A blue-eyed soul singer in the mold of Sam Smith, Scott’s exquisite reimagining of Robyn’s “Dancing on My Own” as a ballad hinted at his great taste in music. That song, as well as a reading of Bob Dylan’s “Not Dark Yet” can both be found of Scott’s full-length debut album Only Human (Capitol). In addition to being indicative of his interpretation skills, they also demonstrate his vocal abilities—the guy can sing! Scott’s also a decent songwriter, as you can hear on the Leona Lewis duet “You Are the Reason” and the rhythmic “Give Me Something.” Currently on a U.S. concert tour that will bring him to the Cynthia Woods Mitchell Pavilion in Spring on Saturday, July 28.

Gregg Shapiro: You first crossed most people’s radar when you competed on season nine of Britain’s Got Talent, on which you performed a ballad version of Robyn’s “Dancing on My Own.”. Please tell us why you chose that song.
Calum Scott: I’m a fan of Robyn’s. I love all the music she put out. Obviously, “Dancing on My Own” is one of those songs that is super-relatable. We all know what unrequited love feels like. I was a fan of that song way before the audition. On the path to discovering my own voice, I had come across a ballad version of the song. Kind of without thinking, I remembered the lyrics to the song and pressed “record” on the little home studio that I built. It felt so honest. Another thing I did was not change the pronouns. It came from the perspective of myself, a gay man who was desperate for love, and always seemed to be falling in love with the straight guy [laughs]. Not only did I personally relate to the song, but in my rendition, I tried to make it my own. I think, in a ballad version, where you strip away the beat and the production that makes you want to dance around, you can hear how heartbreaking the song is. It jumped out and hit me in the chest, really, because I personally related to it. It made sense. I remember recording it and playing it for my mom and my sister. I knew I had found something very powerful.

Have you met Robyn and, if so, do you know what she thinks of your rendition?
I haven’t managed to meet her. It’s like a dream of mine. Being in the industry now, I get it. It’s very busy and you don’t have a minute to sit down. We haven’t connected in that way. But, when I was writing in Sweden, I was lucky enough to meet up with Patrik Berger, who was the songwriter on “Dancing on My Own” with Robyn. I said to him, “I really want to know what Robyn thinks of it.” He said he has spoken to her and that she loves it and thinks it’s great. Thank God! I would hate it if she hated it [laughs].

You included the Tiesto mix of “Dancing on My Own” on your debut album Only Human. Was that done as a nod to Robyn and the original version?
Yes, of course. I pay tribute to Robyn all the time. Every time I post about the song, I always include her. She’s an incredible songwriter who not only helped so many people with the way she sang the song, but she affected me in a way that allowed me to retell the story. It just shows you the power of songwriting. I wanted to make sure the song was on my album. The way that Tiesto put the song back into production similar to Robyn’s, it’s come full circle. I want to give thanks to him as well for putting me under people’s noses who may never have heard the ballad, reintroducing me and Robyn to a whole new audience. I’m a very grateful person. 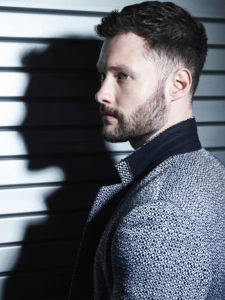 Excluding the Robyn and beautiful Bob Dylan covers, you co-wrote the remaining 11 songs on the album. How would you describe your role in the songwriting process?
When I first started writing music, which wasn’t so long after (appearing on) Britain’s Got Talent, probably in September 2015, I was writing songs about going to the clubs and partying [laughs]—all the things I expected people wanted to hear. You listen to the radio and you hear all these feel-good songs. I guess that’s what I thought songwriting was, writing for the people. It wasn’t until I started writing personal and honest songs about my childhood, the issues I had with my sexuality growing up, all that kind of stuff—when I started writing about that, suddenly it made sense. I started to write more sensitive songs. Some of the songs I’ve written are anthems for people struggling with their own sexuality. It’s a huge privilege to be able to help people with what I went through, the similar circumstances. I would say my role in the writing of this album was integral. I wrote songs that were honest because I wanted to relate to my audience. I still consider myself a very normal guy who experiences emotions like everybody else, has my heart broken like everybody else. Part of the success of this story is because I’m still very normal and relatable. With this album, I wanted to make it the same as that and reflect who I am as a person. Coming from a human resources job, I had an opportunity to write an album that could be my only album. I wanted to make something that was a reflection of who I was and an album that I could stand by and say, “This is my story. It’s no smoke and mirrors. It’s just me.”

We hope that there are more albums to come.
If people will have me, I will make albums until I can no longer make them. I’m going to stick around for a little while.

The album closes with a duet version of “You Are the Reason,” on which you sing with Leona Lewis. What was it about Leona that made you want to sing a duet with her?
She’s a superstar, first and foremost, from her personality to her singing capabilities. We were introduced organically. Leona and I have both worked with a very prolific songwriter in America called Diane Warren. Diane had emailed me to say she had just worked with Leona on this duet and that we would be perfect together—two Brits. She said, “Let me introduce you.” We were introduced by email and I was like, “Oh, my God, I just got an email from Leona Lewis” [laughs]. I emailed back, and she sent me some of the stuff she had been working on. I sent her “You Are the Reason” and asked her what she thought of it. She said, “This is beautiful. Can I be a part of it?” Hell yes [laughs]! My [record company] sent her the song, and she sent it back. I was picking my jaw up from the floor. I’m in awe of her. To watch Leona on her journey and see her become a superstar around the world and then for her to be singing one of my songs, it was a very emotional and surreal moment.

In the last couple of weeks, I’ve been to concerts by Culture Club and Erasure. As a gay artist, would you consider Boy George and Andy Bell to be influences?
Yes, of course! I was actually just watching a documentary on Freddie Mercury. In the same vein with those guys, it wasn’t necessarily spoken about as openly as now. We’ve come to a really good time in the world where more and more people are speaking out about the issues we have in the community. Those issues are becoming less and less. Unfortunately, they do still exist in some places and religions. We will get there, I think. People like Boy George and Freddie Mercury and George Michael, artists like those, contributed to the movement for people to be educated and understand that the LGBT community is exactly the same as everybody else. Love is love. That’s why I wrote the songs that I did for my album. It was terrifying for me write some of the songs about my sexuality because I had suppressed it for such a long time. Being in the northeast of England, being abandoned by friends when I told them, I really had it rough. Alongside that, Sam Smith and Troye Sivan and all these other artists that are keeping that conversation alive about LGBT issues, moves the world forward. Music is the language of the universe, I feel. It can translate how we feel through music. Boy George, in his image and music, did make that movement more powerful. We’re not going anywhere.

You are currently on a U.S. concert tour. What can people who attend your show expect to experience?
I had my very first show last night, which felt incredible! It was with Pentatonix here in Salt Lake City. As the opening act, I performed in front of about 8,000 people. I was really nervous. I didn’t expect the kind of welcome that I got. It was the best feeling ever. My face was aching by the end from smiling so much. Like my album, people can expect very honest and raw songs. I’ve stripped it back to just me and a piano. The message will be plain as day to hear. As you can tell, I don’t stop talking [laughs]. I refer to my songs and give a bit of a story about each one. People are going to hear a little bit about me as an artist and a person and the songs that I have created as the person I am today. It’s privilege to be able to be in front of such an incredible crowd and to tell my story.