An interview with Casey Spooner of Fischerspooner.

It’s no exaggeration to say that Fischerspooner’s time has come. In addition to the release of the new album Sir (Ultra), Fischerspooner has been the subject of a museum exhibition, a book, and a recent article in Vogue. As Fischerspooner’s first studio album since 2009’s Entertainment, Sir is its sexiest and most personal effort to date. On Sir, out vocalist Casey Spooner’s long history of creative collaboration with Warren Fischer expands to include Michael Stipe and Andy LeMaster, as well as Caroline Polachek (of Chairlift), Holly Miranda, and Boots. I had the pleasure of speaking with Casey shortly before the album’s release.

Gregg Shapiro: Casey, if you don’t mind, I’d like to begin by talking about collaboration. The name of the band, Fischerspooner, combines your name with longtime collaborator Warren Fischer. You’ve co-written Fischerspooner songs with others, most recently including Michael Stipe and Andy LeMaster. What is it about you that makes you so good at playing well with others?
Casey Spooner: I tried to be a painter, and it was too solitary for me. And I was an only child. I don’t know if that’s related, but I just love going to work, going to the studio, going to a rehearsal space, and I love working with other people. I also think it’s the way I learned. I’ve always been kind of a bad student. I’m not really good at homework and doing stuff by myself. But if you put me in a room with someone, I love learning how someone else is going to approach something, or how they are going to do something. Right out of college, I worked with an experimental theater company called Doorika, which was very collaborative. I’ve been making collaborative work now for 20 years. It’s kind of the way I get things done.

In the 15 years since the release of the first Fischerspooner album, and the nine years between Fischerspooner albums, electronic music has become an increasingly dominant force. As one of the forebears of the “post-electroclash pop revolution,” what do you think of the current scene and Fischerspooner’s place in it?
It’s cool! I’ve always loved electronic music. To me, it’s just another tool. We live in such a digital world now. The thing that was exciting for us is that all of a sudden we had access to these tools, and to a network of communication and sharing music that was so easy. That’s been an amazing historical thing, to be a part of this huge cultural shift that’s now become kind of the way we live. I’m flattered. It’s so crazy. I would never have imagined that I’d be in that place. I thought I was going to be this performance artist/painter/fine artist. I never imagined I would have such an extensive impact on pop entertainment. My idols were people such as Grace Jones and Laurie Anderson. It’s cool that I got to be one of
those people. 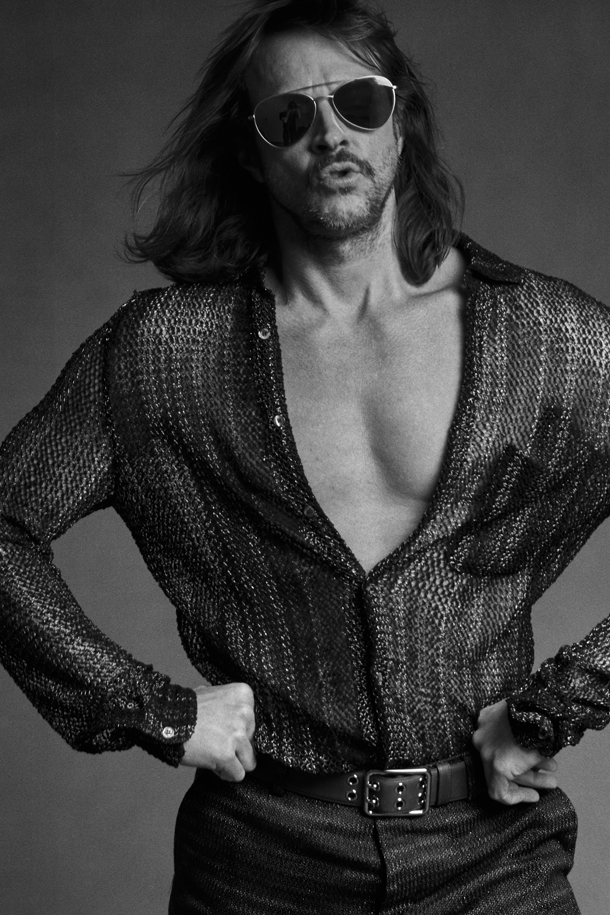 The songs on Sir, such as “Everything Is Just All Right” and “Togetherness,” are intensely and unapologetically erotic and sexual, but also feel extremely personal at the same time.
In gay culture there’s a schism between sex and emotion. I think that’s tied to shame. One of the things I wanted to do on this record is create a world where you can be very sexual and very emotional, and you can have anonymous sex and it can be valuable and important and respected and romantic. Or you can have a more complex long-term relationship that’s equally valuable and romantic and respected. I tried to give value and respect to all kinds of queer relationships, whether they are one-night stands or romances or long-term relationships—to represent and respectfully let all those beautiful and amazing queer connections exist in one place and not [be measured] against a heteronormative fantasy.

The music video for “TopBrazil” is a perfect example of the brazen sexuality of the album. What can you tell me about the influences for the video?
I actually met Tom Brown, the director, on the dance floor at Fire Island. We started our conversation there. There were different things that I wanted to do. There was this idea of lasers that I brought in. There was the idea of these different queer spaces. I love the light on Fire Island, underneath the decks. When it comes through, it’s super-graphic. There were these different architectural and light spaces in which I was interested. The sauna scene felt kind of like where Tom and I first met. It was about representing these queer spaces with beauty and glamour.

We were also concerned about having a cool, dynamic New York cast. There was a lot of debate about how there were so many men! In the end, the thing I like about it is that it’s kind of a classic cliché of a pop video. You would see women in a video displayed with the same kind of eroticism, but you would never see men objectified in the same way. To me, the thing that’s interesting is to put men in a similar situation as women. To see the reactions and YouTube comments alone has been fascinating.

Especially at this point in time, and with what’s happening with the #metoo movement.
Yes, exactly. I think it’s an interesting document of the double standard applied to men versus women. Also, the innate homophobia that exists in the culture. When we turned the video in, people were like, “This is so pornographic!” I was like, “What are you talking about? Have you seen a Rihanna video? Have you seen a Nicki Minaj video? There’s nothing pornographic here! Just because you’re used to devouring women, it’s strange that you’re not able to look at a man in the same way!”

I was especially struck by the song “Oh Rio,” which features a spoken-word segment, as well as guest vocals by Holly Miranda.
That song is a big thesis for the whole record. Actually, that’s the song that convinced Michael [Stipe] to produce the record. That kind of writing and performance is a little bit more of where I’m coming from traditionally as a performance artist. I didn’t come from music. I came from storytelling and performance and theater. That song is basically as it always was. Michael didn’t write on that one. It was one of the songs that stayed after he got involved. The title comes from a Bruce Weber book called O Rio de Janeiro.

When I was growing up in the South in the ’80s, there wasn’t a lot of access to anything homoerotic. There was a bookstore in the mall that had this Bruce Weber book. The first verse tells the story of me going to the mall and visiting this book. It was in the photography section. It never sold. I would pick it up, look at it, and get turned on. I would get confused and freak out and put it back on the shelf.

The second verse is about that moment on the beach where I’m sick and old and tired in a Speedo. It’s the end of summer there, and everyone in Rio is hot. They have amazing bodies. Athletes—what I had fantasized about. My dream came true, but it was a failure for me. There was this beautiful, amazing, sunga swim-trunks salesman smoking weed on the beach who tried to pick me up, but it was the saddest moment—I couldn’t even pretend to be able to engage because my self-esteem was so crushed. I was just stuck on the beach drinking cough syrup.

“Hacking up a lung,” as you say in the song.
Yes, sick on the beach. I always visualized that scene a little bit like Dirk Bogarde at the end of Death in Venice. The first half of the song, to me, is very Bruce Weber O Rio de Janeiro, and the second verse is me as Dirk Bogarde in Death in Venice.

I hope you get to go back again.
I went back last month, and I shot a video for the song. That beautiful video is going to come out soon.

Finally, the cover art for Sir features you sticking out your tongue. A tongue was also featured prominently on the cover of 2002’s major-label reissue of Fischerspooner’s debut album, #1.
It’s funny; that Sir cover photo was taken in Madrid two summers ago by a fan named Vincent Claudio Urbani. I reluctantly went to shoot with him, more as a personal favor than wanting to do a photo shoot. I just happened to be in Madrid. It was completely his idea. He was like, “I want you to do this, I want you to pose this way, I want you to stick your tongue out.” Vincent came up with that idea. I liked the idea that it connected to the continuity of the first record. There was a cool connection, and it is kind of a great, classic, iconic image. I can’t take much credit for it. Vincent Claudio Urbani came up with that idea.