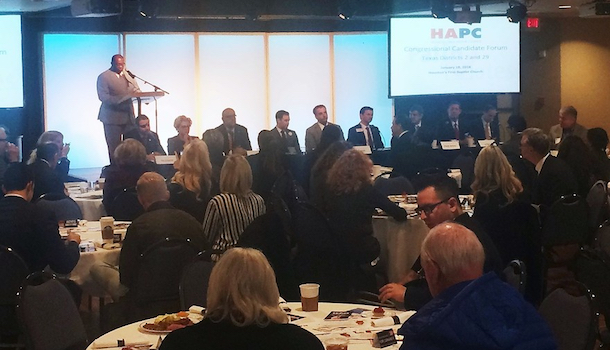 Among the questions posed to the candidates was whether they would support adding sexual orientation and gender identity as protected classes in federal civil rights laws.

“As a father of three little girls, I’m disgusted by the possibility that this may even come up as a bill in Congress, let alone be enacted,” said Rick Walker, who’s seeking the GOP nomination in District 2. “I don’t want to have to worry about my little girls going into a Chick-fil-A bathroom and running into a mentally disturbed man in there.”

Walker introduced himself by saying he was proud to appear at the forum because the Houston Area Pastor Council “single-handedly took down” the Houston Equal Rights Ordinance, which prohibited discrimination against LGBTQ people, in 2015. Walker also claimed that a human resources consultant once recommended that his company “list 55 different sexual preferences on hiring forms,” which he called “too much paperwork” and “outrageous.”

In a sobering reminder that anti-LGBTQ bigotry is alive and well in the Texas GOP, several other candidates offered equally hateful responses.

“When I tell my reason for running, I base it on family values,” said Phillip Aranoff, who’s seeking the GOP nomination in District 29. “I speak to a lot of Democratic friends, and they say, ‘We also have family values.’ And I respond to them, ‘When you take a 5-year-old little boy and put a dress on him and call him Suzie, don’t tell me you believe in family values. That’s child abuse.’”

Other participants said they believe being LGBTQ is a choice that can be changed, and warned that nondiscrimination protections based on sexual orientation and gender identity could lead to the downfall of the nation.

“Religion, race, sex and ethnicity, these are things that can’t be changed,” said Robert Schafranek, a GOP candidate in District 29. “But gender identity and sexual oreintaiton are fluid things that God can change and God can correct in you. So, I don’t think there’s anything to protect when it’s something that is maybe from abuse as a child. I don’t think that’s something where government needs to protect people when it’s something that God can correct it through his loving hand.”

“This isn’t just about Texas, this is about the nation, and we’ve got to protect what it is that’s been given to us by God,” Balat added. “We are a country that was founded on Judeo-Christian principles. If you remember what happened to the great empires of Rome, why did they fail? It was social and moral degradation. We’ve got to protect our country from getting to that point.”

One of the few Democratic candidates who was brave enough to attend the forum, Augustine H. Reyes, eloquently rebuked his GOP counterparts.

“I find myself surrounded by constitutionalists, and let’s not forget the inalienable rights of life, liberty, and the pursuit of happiness,” said Reyes, who’s seeking the Democratic nomination in District 29. “It’s protected by the Constitution, and the Constitution was made to evolve as the country grew.

“You can teach family values all you want at your house,” Reyes added. “But you cannot take away people’s inalienable rights to life, liberty, and the pursuit to happiness.”

Watch the forum in its entirety below.