Have you heard the one about the gay, black, Ethiopian immigrant?

There is a reason he was photographed in androgynous makeup only from the chest up. “High heels give me vertigo. I respect drag as a high art, but I would rather kiss a wasp than duct-tape my genitals,” says the 35-year-old “overnight success,” whose calling card is that he’s a wryly philosophical, gay Ethiopian immigrant with an Italian name.

For the photo shoot, Georgio says he “said ‘Grace Jones’ three times and hoped for the best.”

But when he performs November 17 at the Heights Theater, and November 18–19 at Houston’s Come and Take It comedy festival, Georgio says, “I will look like my regular self.” 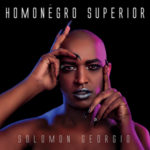 To quote Houston Astros star José Altuve, that will be “pretty good,” according to what Georgio told a crowd recently in Portland, Oregon. He began humbly, saying, “I want to start off, first, by obviously apologizing to everyone in the room—sincerely apologizing, because I did my best to look decent tonight, and I ended up looking amazing. I look like a mannequin that came to life; it’s perfect.”

Offstage, Georgio speaks so rapidly that this writer had to ask him to slow down so he could be understood.

Onstage, he speaks at a more deliberate pace. “It’s intentional,” he explains, endearingly. “I need to take my time onstage because I’m a little nervous, and the real me can pop in and take over.”

When Georgio debuted on the TBS talk show Conan on February 10, 2015, he slowly but surely told the audience, “I just want to let you know that I am openly gay. Well, most of the time. Just took a break on Martin Luther King Day. Sometimes, I just want to be black, and nothing else—you know?”

Georgio’s first comedy album dropped as a digital release on October 20, the same night he starred in the half-hour Comedy Central Stand-Up Presents. “I am in shock and disbelief. I have been an avid fan of those half-hours since they started airing in the ’90s,” he says.

Growing up with two sisters (one of whom is a lesbian) and four brothers, Georgio recalls that the TV was always on. “We watched standup comedy, comedy movies, sitcoms. Comedy was always a thing.”

At 17, he moved from Seattle to Los Angeles as a runaway. “I wanted to get famous. I hopped a Greyhound bus, and I stayed five months—one month in a hostel until my money ran out, then four months in shelters until I reconciled with my parents.”

Georgio returned to Los Angeles at 24, “but two months in, I got mugged,” he says. “They took everything. I returned to Seattle penniless, but I became fully focused on becoming a standup comedian.”

He says he’s always been a fan of the smart comedy he’s becoming known for. “My first love was George Carlin. He was a mix of absurd and very intelligent comedy,” says Georgio. “I watched Eddie Murphy Raw again and again. Margaret Cho, I fell in love with her—just the way she presented herself and told really strong stories. I related to her as an immigrant child, raised by immigrants.”

Georgio also admires Maria Bamford, the self-deprecating star of Lady Dynamite on Netflix who will also appear at the Come and Take It comedy festival.

He says he honed his standup skills in Seattle before moving for the third time to Los Angeles six years ago. “I think it likes me now,” he says of L.A. “Not until a year ago was I actually a full-time comedian. Unfortunately, to become a gay comedian, you have to work a little harder. I worked my ass off, so now comedy is what I do.”

What: Solomon Georgio with Deer Tick

Don Maines is a regular contributor to OutSmart magazine.