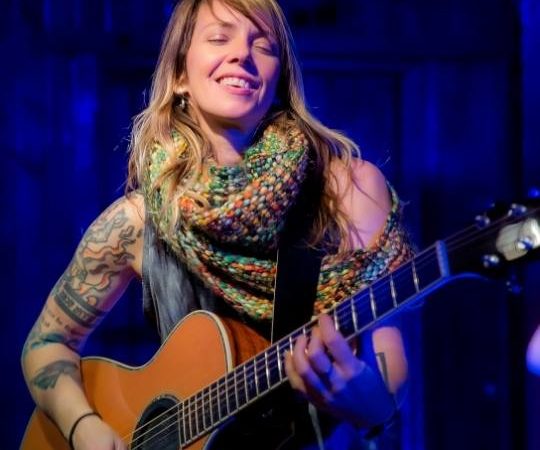 Patrice Pike was still a music student at the University of North Texas, when she left to start Little Sister.  That group soon became Sister Seven, the seminal Austin jam band. When Sister Seven later disbanded, she began her solo career with her album Fencing Under Fire.

Over the last ten years, she has independently released five acclaimed solo records. She has toured relentlessly, both in the U.S. and overseas. She became the youngest member of the Austin/Texas Music Hall of Fame in 2007. She also creates and performs music with Wayne Sutton, who cofounded Sister Seven with her, as Pike  Sutton.

She is an accomplished snowboarder and runner. She travels extensively. She has a disciplined meditation practice and teaches certified Integrative Yoga Therapy for Charity.

She is all of that but none of it is who she is. Who she truly is. She is a voice of a generation, a powerhouse, a siren. She is soulful in a way that defines description. Her music tells the stories you had no idea how desperately you needed to hear. She is a rocker and a spirit and a force.

Pike will be here in Houston on August 27  having just recently performed at Michigan Fern Fest  what might be called the reincarnation of Michigan Womyn’s music Festival (Mich Fest).

At this show, Pike said she will feature some of the new songs she’s been writing. “I am in the middle right now, post-pandemic, around what will a new record be like. I’m in the process of imagining. It feels like limitless possibilities,” Pike said. “My partner asked me if there was anyone I wanted to collaborate with. What was exciting was the question and how that sounded and felt.”

Pike said she has some ideas about a couple of different producers and engineers with whom she wants to work. “I’m leaning into these new songs and imagining what I want them to sound like and who would be a great partner in going in those directions,” she said. “I co-produce all my records with creatives I really like to work with. I want that partner to be open to new ways to create things sonically. That’s not revolutionary but it feels exciting. I made this really great record “Heart is a Compass” that I’m really proud of. I feel like it’s one of the best records I’ve ever made.”

OutSmart’s Jenny Block spoke to Pike about her music, the pandemic, and queerness in the music industry.

OutSmart:  What is your process like when it comes to making music?
Patrice Pike: When I’m making a record, I don’t listen to a lot of other people’s music. I don’t think about money. I don’t think about the business plan. I root down into the creative possibilities. I want things to bubble. It’s all about not allowing constriction. It’s a practice I have when I’m creating a new record. I allow for expansiveness. I want the music to speak for itself. Authentic and genuine and unique. The intention is centered on creative freedom. It’s important for me to stay true and make the best music come out of me.

Can you speak a bit about what it was like coming up as a queer artist?
Being out in the 90s was dangerous physically and emotionally but also to one’s career. Many people did not come out until they felt safe. That was not the road that I took. To be dishonest about what that meant to me as a human didn’t feel safe because it wasn’t true. I knew that there were consequences because I was on major labels and touring and on MTV and VH1. I could feel the impact of my outness. It was very uncomfortable and it was hard for my colleagues because they weren’t queer.

I am now deep into my life. I have been an out artist my whole adult life since I was 23 years old. I’ve been through the commercial music industry. I’ve made choices that I’m proud of. At this time in my life, that’s set me up for an incredible amount of freedom in my expression. Our fans weren’t just queer. It was almost a culture clash. A lot of people who break down boundaries are unknown people. I’m proud to be a part of the culture at that time in rock and roll and music and to bridge the gap between pop culture and communicating with society for a while. Please support queer people who have been doing this work their whole lives.

You are also the co-founder of the Step Onward Foundation, can you tell readers more about the foundation and how the pandemic affected it?
We work with young adults dealing with homelessness, people who have experienced housing insecurity, and who have gaps in housing and food. I left home when I was sixteen and had some experience with that. When the shutdown happened, we instantly had to recalibrate how we were fundraising and making sure Step Onward
would survive the pandemic. We were able to reach out to friends and owners of businesses and do an online fundraiser and then a live one. We raised $300,000 to shore up our work.

How did you manage the pandemic and all of the fear and uncertainty?
During the pandemic, there was a lot of fear and grief and I didn’t want my next body of work to come from that place. So, I really spent that time focusing on playing live online and showing up regularly twice a week to hold space for the community to keep each other connected. I played a lot of songs I hadn’t played and I took requests. There were anywhere from 100 to 600 people on the live stream at any given time. That gave me a creative outlet and so I was not focused on grief and loss and fear. I saw a lot of new relationships connected to the live stream community. People at my live streams started new friendships and couples. I’m glad that I dedicated my time to creating that live stream community. I could invite anyone in the world because it was online

Now I’ve been writing songs about a lot of how deeply I got to know myself and I was able to cultivate that during the shutdown. A lot of people went through a lot of loss. I had a lot of compassion for myself and self-love and it gave me insight into how much I needed to really love and care about my vulnerability so that I could come out on the other side of this really terrifying experience. Now it’s about just having a sense of anything is possible when people really support each other and love each other.

For me everything changed, I went through a major relationship ending. I really learned what community and friendship mean to me. With all the stuff stripped away, I was able to really decide. It shifted my focus a lot. And now I’m writing new music on the other side of all of that, having a sort of renaissance about what is really valuable, what is going to produce music that is relevant deep down in my soul and that people that can
relate to. That’s the focus for me.