“Right after I graduated high school, I went to my friend’s comedy spot, and she called me on stage,” recalls Hunt, now 38. “I was nervous and didn’t know what to do, so I mimicked Cleo, the TV psychic. I got some laughs, so I decided to do it again.”

Hunt, an out lesbian from Houston, is now a celebrity in her own right. Her jokes have landed her spots on NBC’s Last Comic Standing, Bill Bellamy’s Who’s Got Jokes? and Jamie Foxx Presents: America’s Funniest Comics. In 2013, she made her mark as the first female champion of Miller Lite’s annual “Stand Up. It’s Miller Time” competition that helped kick-start the careers of Bernie Mac, Cedric the Entertainer, and Sheryl Underwood.

After winning the Miller Lite competition, Hunt took home a grand prize of $10,000 and was featured in Complex magazine.

When Hunt isn’t competing or touring the country, she is a regular performer at two local comedy joints, the Houston Improv Comedy Club and The Secret Group. A self-described pint-sized tomboy, Hunt stands at four feet eleven inches tall. On stage, she often pokes fun at her height, androgyny, and experiences with dating women.

“Y’all looking at me like, ‘She said her name is Keisha, but that ain’t no damn Keisha. Who is that? Somebody let their son up there,’” Hunt said as she introduced herself at an all-women comedy showcase at the Joke Joint in March. “Ladies, even though I look like this, don’t ever confuse me with a man. I don’t take out the trash; that’s for dudes.” 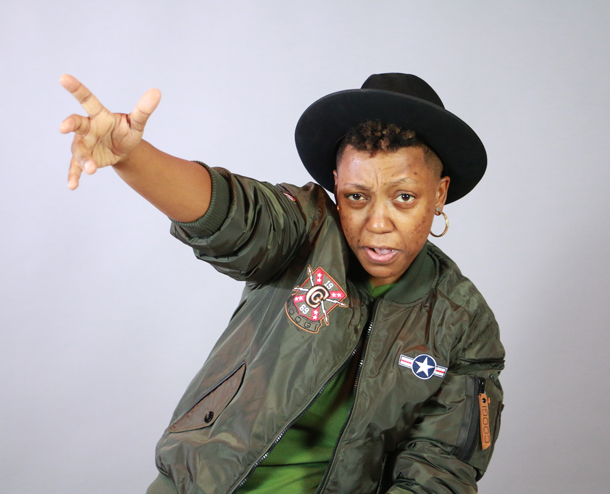 Hunt describes her humor as personal and family-oriented. Her mother, father, and 13-year-old son provide the inspiration for much of her material. By focusing on her inner circle, Hunt keeps controversial subjects, such as politics, out of her act.

“I try to stay away from politics because I just want to make people laugh,” Hunt says. “I touch on Trump every once in a while, but that’s just because I have to. Some people can find humor in politics, but other people, like me, get angry.”

Hunt also regularly “freestyles”—concocting humorous scenarios that audience members may have faced based on their appearance.

“I like to feed off of my environment,” Hunt says. “I can create a story based off of what I’m looking at. Some people think I’m weird, but if I write stuff down, it’s not always genuine. The person I choose to make jokes about usually enjoys it, but I try not to be too harsh on them.”

On September 3, Hunt celebrated her birthday by headlining Gay Shame Parade, The Secret Group’s bi-monthly stand-up show featuring “gays, probable gays, and people we wish were gay.” Hunt says the performance was one of her most memorable because the audience responded so well to her and other LGBTQ comics.

As a queer comedian, Hunt aims to be a voice for those who are not yet out.

“I’m an out-and-proud lesbian, and it’s so good to be free,” Hunt says. “Of course, we still have a lot to work on, but times are changing. Representation matters. If you can, come out of the closet, for goodness’ sake.”

Growing up, Hunt was a class clown. In high school, her theater teacher introduced her to the art of comedy by putting on a Saturday Night Live VHS tape.

After realizing that stand-up comedy might also pique her interest, Hunt went out and saw live performances by Martin Lawrence, Eddie Griffin, and Andrew Dice Clay.

“I got bit,” Hunt says. “After seeing all of those great comedians, I knew I wanted to do that, too.”

Hunt’s first-ever performance was attended by black comedy legend and well-known civil-rights activist Dick Gregory, who sat in the front row. When she asked Gregory for career advice, he simply told her to adjust her mic for future performances. Although she wishes she had gotten more out of him, Hunt says Gregory’s presence at the show inspired her to continue pursuing comedy.

Although she feels she hasn’t reached her full potential, Hunt says the most rewarding moment of her career was performing for U.S. service members based in Iraq in 2007. She says the best part about being a comedian is raising people’s spirits.

“I look at stand-up as a form of ministry,” Hunt says. “People have different ways of being reached, and comedy is one of those ways. Some people just need a laugh, and I can do that for them. That’s my favorite part.”

The Secret Group will host Gay Shame Parades on November 11 and 26.