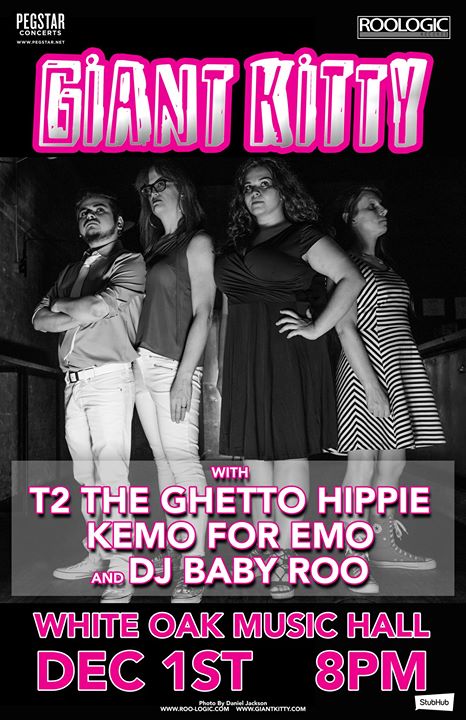 Giant Kitty
Giant Kitty continues the tradition of strong female voices in punk while bringing along eclectic influences, diverse backgrounds, and a comedic sensibility. This four-piece combines elements of punk, new wave, hard rock, and riot grrrl to make playful and relevant songs full of energy and sharp lyrics. Their sound is often described as a mix between the Runaways, Bikini Kill, and Blondie.

T2 ‘Ghetto Hippie’
Houston’s T2 Ghetto Hippie is a homegrown artist with a deep understanding of the south’s storied place in hip-hop. Although he draws inspirations from the greats, he brings a modernized sound to the city. This year has been a busy one for him, landing on NPR’s podcast’s special SXSW 2017 preview, along with an impressive amount of blog coverage. His visual Double Cups & Taco Trucks was praised by Earmilk as one of their “favorite videos of 2017,” and his Trakksounds-produced album, A Southwest Side Story, landed on Houston Chronicle’s “12 of the Year’s Best Houston Albums.”

Kemo For Emo
“They craft one of the strongest and most diverse punk albums I’ve heard in a long time.” – Free Press Houston

Since release of A Picture Perfect Romance, Kemo For Emo has has opened for NOFX, Unwritten Law, Fenix TX, and other punk greats.

DJ Baby Roo
“I show up w/ turntables, I play music, people dance, I go home, anything extra is unnecessary. Keep it about the crowd & their good time, not about the DJ.”