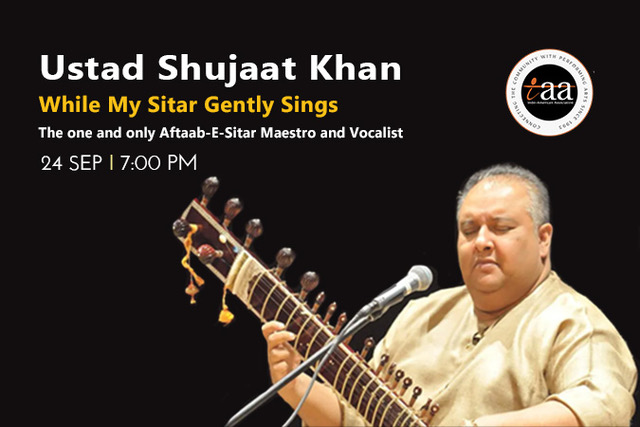 Ustad Shujaat Khan – While My Sitar Gently Sings on September 24!
Ustad Shujaat Khan is one of the greatest sought-after North Indian classical musicians of his generation. He belongs to the Imdad Khan gharana of the sitar, tracing his musical lineage back to the 16th century, through the Imdadkhani-Etawah gharana – one of the oldest and most illustrious of Indian classical schools of music. His style of playing sitar, known as the gayaki ang (vocal style), is imitative of the subtleties of the human voice. There is a deep yearning in Ustad Shujaat Khan’s voice – a yearning for a simple and soulful life.

Shujaat Khan, is a Grammy Award Nominee for Best World Music Album. He came up with a folk and sufi album ‘Lajo lajo’, which had him singing along with playing the sitar. This unique approach not only gave strength to a family tradition but also ascribed to individual expression and creativity. One of the greatest living legends of sitar, Ustaad Shujaat Khan will be accompanied on the Tabla by Gourisankar Karmakar and Nitin Matta. He will serenade the audience with his soulful sitar and vocal music in “While My Sitar Gently Sings” – a concert not to be missed!