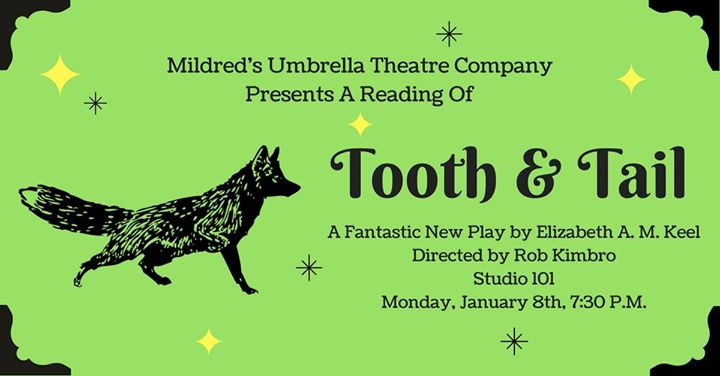 Adding to an already exciting season, Mildred’s Umbrella (MU) is excited to share a new fantasy from local playwright and University of Houston student Elizabeth Ann Michaela Keel. Keel is an emerging female playwright whose work has been performed at METDance, Bootown, The Landing Theatre, Nova Arts, and Cone Man Running in addition to MU in Houston, as well as Squeaky Bicycle, and Fresh Produce’d in New York.

TOOTH & TAIL follows in the footsteps of Keel’s previous works with a keen eye to embracing the slightly impossible. “I am a longtime fan of both magical realism and stageworks which challenge the audience’s imagination and requires them to be more than passive participants,” says Keel, who is currently pursuing a Master’s degree in Theatre Studies at the University of Houston. Jam-packed with princesses, dragons, pirates and more, TOOTH & TAIL is part fairy-tale, part rescue mission, part love story, and all adventure.

TOOTH & TAIL was developed and workshopped through the support of Mildred’s Umbrella Theatre Company, and their ongoing commitment to the empowerment of female theatre artists and their stories. The audience is encouraged to stay after the performance for a discussion with the playwright, director, and cast.

TOOTH & TAIL plays for one night only, Monday, January 8, 2018, at 7:30 p.m. in Studio 101 at Spring Street Studios, in the heart of the Washington Avenue Arts District. Entry is by donation and will support MU’s efforts to promote the works of women in the performing arts. For more information, call 832-463-0409 or e-mail [email protected].