For book lovers, the mere mention of a production company bringing a beloved story from the printed page to the big screen triggers a sense of apprehension. Reviews are often mixed, wrought with impassioned opinions and criticisms.

In some instances, however, undeniable magic happens during these big-screen adaptations—as is the case with director Michael Showalter’s Spoiler Alert, a new film starring Houston native and University of Houston alum Jim Parsons.

Bringing a fictional story to life is one thing. Bringing a true story about real people to life is an entirely different ballgame, and a gamble that Parsons and the cast (including Academy Award-winning actress Sally Field) were willing to make. The movie is based on the memoir Spoiler Alert: The Hero Dies by journalist Michael Ausiello, a heart-wrenching, side-splitting autobiographical book that recaps the love life between Ausiello and his husband, Kit Cowan, who would ultimately succumb to a years-long battle with an incredibly rare form of cancer.

“When I first read the book, I was reading it strictly to be able to intelligently host a Q&A with the author at a Barnes & Noble,” Parsons, who portrays Ausiello in the film, explains. “I connected with it very emotionally and deeply, in part because it mirrored many things about my own relationship timeline. I [eventually realized that] this amazing and heartbreaking journey that he went on with this other human being was the kind of tumultuous, incredible journey that leads to being able to see life in a clearer way. [Ausiello’s journey teaches us that] heartbreak is, in some ways, the only way to open yourself up to loving more sincerely and less defensively. My husband is the one who suggested that we should make this into a film. I can’t claim to be smart enough to put two and two together.”

Ausiello had actually interviewed Parsons during his time on the hit sitcom The Big Bang Theory. Their connection was undeniable, but Ausiello’s memoir is what ultimately guided Parsons’ portrayal of the real-life television journalist and author. “I don’t know that I’ve ever had one piece of material like that. I read it repeatedly. I can’t count the times I went through that book,” he explains. “There is such a power to the story. It’s vicious, evocative, and it would evoke in me this reality of what he was going through and the horror, mystery, and fantastical journey that he was on. It was very helpful for me to keep going back to that as we were making this film and reminding myself of the kind of breathtaking, awestruck feeling he must have been feeling as he described living through this roller coaster.”

Parsons, who proudly identifies as gay, understands that his portrayal in this film is a form of representation for the community. But this story, in Parsons’ opinion, is larger than a simple “LGBTQ” genre label implies. “What became clear with this project, in particular, was that from an LGBTQ+ point of view, it is a very typical love story that we’ve seen for our entire lives through movies. And in a beautiful way, they just happen to be two men going through it,” the actor explains. “In some ways, its first classification [should be] ‘love story,’ and then you could pick and choose [other themes], and ‘gay’ would certainly be in there. I was getting to bring what I know about being a gay person in the world [as I] participated in a type of movie that I’ve admired and wanted to be a part of [my whole life]. That was what was really magical about this.”

In December 2021, Ausiello shared a photo of himself on Instagram in a full embrace with Parsons and Ben Aldridge, who portrays Kit Cowan. Parsons explains that the photo captures a bond between friends who were wrapping production on this intensely unique project. “I remember pretty distinctly feeling stunned and not quite prepared to end it,” he admits. “It’s one of the more rewarding experiences I feel I’ve had as an actor. There was no day that wasn’t intense. That’s not to say that everything we were doing was laced with sadness or tragedy, but there was a passionate commitment on everyone’s part to tell this [story] as best we could. We were telling an extremely personal and intimate story, and that really affected the way that Ben, Showalter, and myself approached our day-to-day on that set. It was very muscular, hands-on, and passionate.”

The Houston-born actor, who lists The Original Ninfa’s, the Menil Collection, Rothko Chapel, and the Cy Twombly Gallery among his hometown favorites, discovered that Ausiello’s story about love and loss opened up a new perspective on life for him. He hopes the movie will do the same for its audiences. 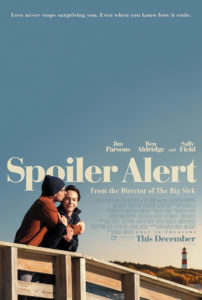 Parsons pauses before summing up the priceless lesson of Spoiler Alert. Reflecting on the theme of the inevitability of heartbreak and the willingness of humans to participate in endeavors that inspire that type of loss, Parsons says, “I think it’s some sort of profound truth that once a heart is broken it creates more space, and through that heartbreak, you are able to see the world in a way that you wouldn’t have been able to without that heartbreak.”