All I want for Christmas is…lube? Leave it to comedian Matt Rogers to turn the typically family-friendly Christmas Special genre on its head in his own hilariously original way. In Matt Rogers: Have You Heard of Christmas, streaming now on Showtime, Rogers gets by with a little help from his friends to bring his holly, jolly, kooky, and queer holiday special to life. The comedian is bringing his latest project to Austin on December 21 for a sold-out performance at Emo’s.

“One day in 2017, I was watching an interview with Mariah Carey, as I am wont to do, and she was gearing up for the Christmas season. The interviewer was complimenting her on being not only an excellent purveyor of Christmas content, but also a genius marketing mind,” the comedian recalls. “She was seasonally ubiquitous. Every year for Christmas, it’s ‘The Mariah Show.’ I think that’s what I got from that — both a comedic idea [for this special], which was, ‘Oh, I think that’s really funny that this person wants to be famous every year on Christmas, and you can’t ignore them. It has to happen every year because Christmas isn’t going anywhere.’ And then secondarily it was just something that I thought would be a shrewd move for me, because now I get to perform every year, and that’s all I really want to do.”

The performer, who has had supporting roles in shows like I Love That For You and films such as Fire Island, isn’t taking himself too seriously and hopes viewers won’t either. “[The idea] was both a joke and also real, which I also think is like a good way to describe the special,” Rogers says laughing. “Like, it’s genuinely a Christmas special, but it’s also dragging Christmas specials.”

Rogers, who also hosts the wildly popular weekly podcast Las Culturistas with co-host Bowen Yang, who appears in the special as himself, explains that by simply being a leader and star of his own musical special, it is undeniably queer, and he’s just fine with that. “I can’t help but be who I am. I didn’t set out to make a gay Christmas special, I set out to make a Christmas special that represented me and my point of view. I will always be queer. I always have been. It is a part of my comedy. It’s a part of my identity. So when I do anything from my perspective, it’s going to be drenched in that and I’m happy about that.”

Rogers pulls inspiration from the divas for original songs like “Lube for the Sleigh.” There’s also a tune that is a play on the song “Girl” by Destiny’s Child that Rogers performs with comedians Aaron Jackson and Josh Sharp. Those lucky enough to see Rogers live are in for a treat, as he explains there are plenty of differences in his live act. “The taped version on Showtime is a documentation of me trying to become the ‘Prince of Christmas,’ and join Mariah Carey in the Christmas canon. She’s the Queen of Christmas, and I’m just really trying to solidify myself as this thing that we’re going to celebrate annually as part of the holiday,” Rogers says, offering a summary of the Showtime special. “On stage, it’s really a performance of the album and I’m in character the whole time. Something that I give the live audiences that have come to see the show is four new songs that I don’t do in the special, and the live show is like a true live experience of the album being performed.” 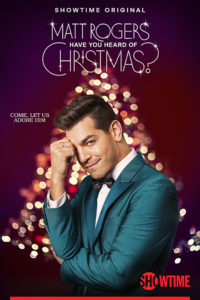 Always quick to give his peers their flowers, Rogers notes that while he may be the main act in this special, he has plenty to thank for his rise to the top. “It’s a really great opportunity for me to be able to show what I’m individually all about, but I have never felt like I wasn’t showing who I was in my collaborations or felt like I hid behind anyone. I’ve always felt very enriched by my collaborative relationships and I’ve always felt like my impact was heightened by the people that I’ve worked with.”

Naming Henry Koperski, the special’s composer and pianist, as a huge player in bringing the special to life, Rogers focuses on his keys to success—his community. “Anyone that steps out with a successful creative endeavor is lying if they say they did it by themselves. I’m someone that knows that we are all made stronger when we celebrate each other, when we support each other, and we talk about what we’re all doing.” Pondering his future creative projects, Rogers says, “I always want to keep the spirit of collaboration. I always want to keep the spirit of togetherness, because I know that we’re all made better for it.”

Matt Rogers: Have You Heard of Christmas is streaming now on Showtime.