Houston Ballet first soloist Harper Watters has been a dancer ever since he could leap across the living room as a child. And he has also been inspired by The Nutcracker ballet since those childhood days in New Hampshire.

“I choreographed a one-man version of The Nutcracker, taking props from around the house. I took the Christmas tree skirt from the attic and made it a dress, and I would turn the lights off and just have the spotlight from the chandelier in my living room.”

His parents soon gifted him a VHS tape of The Nutcracker (the movie starring Macaulay Caulkin) that saw a lot of use. “It could be the hottest day of summer, and I would still watch The Nutcracker—especially the snow scene.”

While Watters was dancing at a local dance studio as a kid, he was finally cast in a Nutcracker production. “And I’ve been doing it ever since,” he says. That includes 26 shows in two years at the Walnut Hill School for the Arts in Massachusetts—and at least 35 times each year during the 12 years he’s been with the Houston Ballet.

And though he was cast in smaller parts at first, he says, “I’m really lucky. For the past five or six years, I have danced the Prince. I kind of graduated each time from different roles.”

As Houston Ballet’s only Black first soloist in 20 years, Watters has worked with the very best choreographers and has performed across the US and the world, including in Guatemala, Canada, Germany, France, and Switzerland.

Here are five fun facts about Stanton Welch’s Nutcracker production at the Houston Ballet, which premiered in 2016:

• The show includes 61 adult dancers and over 300 young dancers; 95 musicians rotate in the orchestra pit throughout the run; 36 stage hands, 16 dressers, 6 hair/makeup crew members, 3 costume maintenance supervisors, and a laundry manager all work behind the scenes.

We caught up with Watters ahead of the November 25 Nutcracker opening at downtown’s Wortham Center to find out more about the production and his role in it.

Jenny Block: Do you continue to enjoy dancing in Nutcracker year after year?

Harper Watters: I do. It’s a fantastic opportunity to check in with your technique, to check in with your dancing, to see how you can revisit something to improve on it, [and decide] what you want to focus on this time. Each year, there’s a newfound confidence I find with it.
How have things changed at Houston Ballet when it comes to The Nutcracker?
When I first joined Houston Ballet, we had Ben Stevenson’s version, which is a real classic. It’s really traditional. And when the Stanton Welch production debuted, they really turned up the glam. They really turned up the effects and the drama and the production values.

Just like the dancers, audiences return to The Nutcracker year after year. Why do you think that is?
I feel like The Nutcracker is the Disney classic of the ballet world. It’s like The Lion King. It’s like The Little Mermaid. It’s the magic. People have a connection to it being on a holiday. It’s a tradition. I think it’s really nostalgic, as well.

How do you keep that magic going year after year, and show after show?
It’s really about hearing stories of audience members and the children, and seeing how they respond to it. Ninety percent of the time, it’s someone’s first time ever coming to the ballet. Knowing that is what motivates me to keep up the magic and to not just go into autopilot. Also, these young girls and boys are really going for it! Knowing that they are makes it so that we want to, as well.

Many of the dancers, including you, dance numerous roles in a single performance of the show. How on earth do you do that?
I feel like the skill of memorization and repetition is really important. And it just starts from how we start our day. If you’ve ever watched a ballet class, you see the teacher just kind of giving the combination [of dance moves], and you have about 30 seconds to pick it up. It’s really built into our daily lives to just start memorizing—to have this repetition. Nutcracker is extremely iconic, and Stanton has made these moves that are so musical that you can turn the music on and it just happens.

Are there any comical moments in this particular production?
Instead of the traditional Mother Ginger, Stanton has interpreted it in a new way [with a character] called “French”—a French man who is coming to eat, and all the Houston Ballet School students are chefs who frantically prepare his meal for him. [The comedy] begins when they present him with escargot and it’s just not to his liking. And it ends with the man frantically chasing after the ambassador frog with a fork and knife. So it’s a really comical number!

To those who say ballet in general, and perhaps The Nutcracker in particular, is not for them, what do you say?
I feel like ballet is “the minority” of the arts world. It’s the underrepresented, underappreciated one. But it is thought-provoking, and it is art. And I would encourage people to come and enjoy it and support it and be open-minded to it. It’s like a warm hug. I would be hard-pressed to believe they wouldn’t enjoy it, or at least enjoy parts of it, because Houston Ballet is just that good. 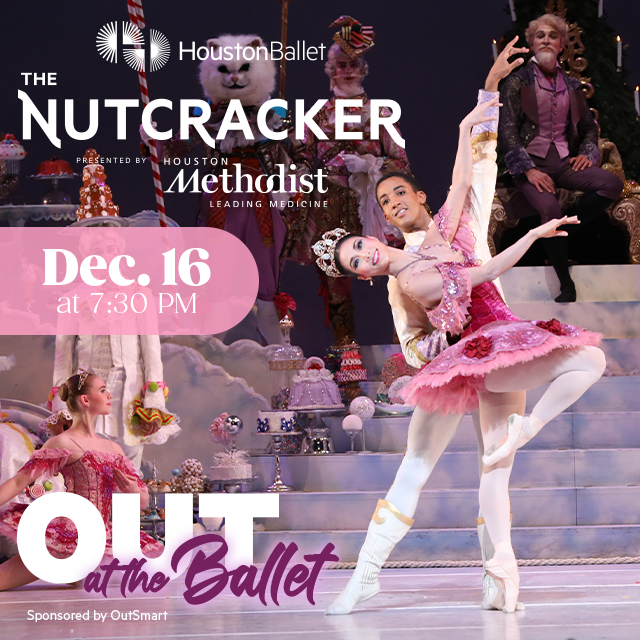 Join Houston Ballet and OutSmart Magazine for our inaugural Out at the Ballet, a special night for LGBTQ+ ballet fans at Stanton Welch’s The Nutcracker. Use promo code OUTBALLET to save 25% on orchestra-level seats, and receive a complimentary drink along with access to a private reception in the beautiful Wortham Theater Center lobby alcove prior to the show and during intermission.

Make the Yuletide gay! Celebrate the season with OutSmart and Houston Ballet. All are welcome.

The Nutcracker Out at the Ballet
Friday, Dec. 16 at 7:30 PM
6:30 p.m. – Private Reception
Includes one complimentary drink per guest + cash bar
The reception space will also be available during intermission.

SAVE 25% ON ORCHESTRA-LEVEL SEATS with promo code OUTBALLET! Click here to get your tickets for the inaugural Out at the Ballet

What: Houston Ballet’s The Nutcracker
When: November 25 to December 27
Where: Wortham Theater Center, 501 Texas Ave.

Info: Call 713-227-2787 or visit houstonballet.org.
For more on Harper Watters, visit theharperwatters.com.
WHAT TO READ NEXT: Dancing in the Digital Age with Harper Watters