The Montrose Center and other community partners are coming together for a Wednesday night vigil in honor of the victims of the horrific attack in Colorado Springs.

Late last Saturday, gunfire erupted at Club Q in Colorado Springs leaving five dead and 18 injured. It was a horrific—and all too frequent—reminder of the increasing hate against the LGBTQ+ community. 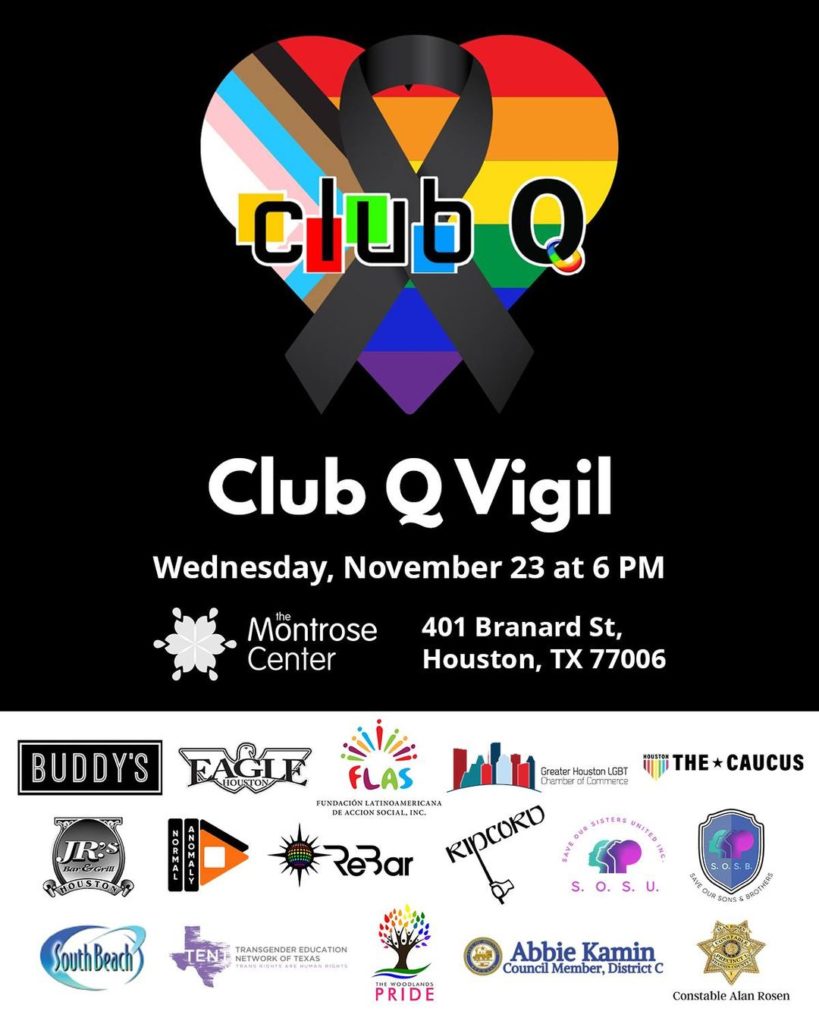 “As I woke up in the wee hours of the morning on Sunday and saw the news of this tragedy, I was in shock and my heart sank,” said Tammi Wallace, Co-Founder, President, and CEO of the Greater Houston LGBT Chamber of Commerce. “Our hearts are broken. This attack on the LGBTQ+ community at Club Q is devastating. An attack that, rooted in hate, reminds us once again that lives are precious. The loss of lives and traumatized victims means that lives are forever altered and a community is scarred from an unthinkable act of violence.”

The idea for the vigil came from the Montrose Center’s Communications and Marketing Manager, Austin Davis Ruiz. “It was born out of a personal effort,” Ruiz said. “I heard the news and I immediately thought back to Pulse. Our community is under attack and we need to come together to grieve.”

The vigil is scheduled for 6:00 p.m. and will be held outside with candlelight, weather permitting. Speakers from various LGBTQ+ organizations are planned, and written statements from Councilmember Abbie Kamin and Mayor Sylvester Turner will be read. The victims’ names will be read and a moment of silence will follow.

The attack ended when military veteran and dad Richard Fierro and at least one other patron subdued the shooter until police arrived.

“This whole thing was a lot, my daughter and wife should’ve never experienced combat in Colorado Springs. And everybody in that building experienced combat that night, not to their own accord, but because they were forced to,” Fierro tearfully told CNN. He held the gunman down while James kicked him in the head with a high heel.

The club issued this statement: “Club Q is in shock, and in deep mourning, with the family and friends who had loved ones senselessly taken from them. We condemn the horrific violence that shattered an evening of celebration for all in the LGBTQ community of Colorado Springs and our allies. Club Q offers our greatest gratitude to those who moved immediately to stop the gunman and prevent more loss of life and injury. Club Q has always provided a space for LGBTQ people and our ally friends to celebrate together.”

Ruiz also noted a direct link between the current anti-LGBTQ+ climate and the violence.

“In the last Texas legislative session, 120 anti-LGBTQ+ bills were filed,” he said. “The violence we are seeing today is a direct result of the hate being openly directed to our community.”

As of Monday, Texas Republicans had introduced 17 bills targeting the LGBTQ+ community. The legislation included bans on access to gender-affirming care, LGBTQ+ topics in schools, participation on college athletic teams, and even one bill that would criminalize drag performances.