Discovering she was adopted at the age of 7 was just the beginning of a journey of self-discovery for Shana Ross. The author, whose full-time career has made her a titan in the Houston fitness scene, is celebrating the debut of her memoir, Tribeless: Discovering the Truth about Nature vs. Nurture as One Woman Finds Her Birth Mother. On page after page, Ross weaves pivotal moments of her life to create a tapestry that provides hope to people in various stages within the adoption system. It’s a story of the resilience of the queer community and a call for everyone to lean into the unknown and pursue their ambitions before it’s too late.

“I’ve always enjoyed writing, and I thought I would write a book one day. I just didn’t think it would be my life story!” Ross says with a grin. “I really felt that there were many things I could share that could end up helping a lot of different people—not just those who are adopted.”

While recounting the parts of her life that she wanted to feature in her book, Ross paints a picture of a typical East Texas upbringing—church on Sundays, riding horses with her father who served in World War II, and a community that had conservatism ingrained in its fabric. Regarding certain memories that paint her family in a less flattering light, Ross knew she couldn’t sugarcoat her truth. “The hardest thing was recounting the story [of my coming out], because I had a pretty tumultuous upbringing,” she admits.

That’s a bit of an understatement, as the stories she shares reveal just how dangerous coming out to non-affirming families can be. “I had to tell my story, my truth,” she says. Ross didn’t allow her relationship with her adoptive parents, which ebbed and flowed throughout her life, to alter the narrative. “I wanted my parents to be seen not as monsters, but as people struggling with their own things.”

Houston in the 1980s is the nostalgic setting for much of the book, as Ross writes fondly of her time hanging out at Babylon and dancing at The Parade. “I was in Houston during the onslaught of HIV/AIDS, and I worked in the community a lot. We all felt hopeless; we felt helpless. There was so much going on, and the community was so close, so tight-knit,” she recalls. “In some communities, you would say ‘Montrose’ and you would get a sneer, because it was known as ‘the gay ghetto.’ But there was such a community, because we were all we had. The bar scene was like a big backyard barbecue—everybody was family, everybody was a part of it. I loved it, I absolutely loved growing up during that time,” she adds. “I miss that sense of community that we had back in the ’80s.”

Toward the latter part of her memoir, the fitness guru details the years-long, emotion- ally taxing process of ultimately deciding to search for her birth family. “The whole thing was terrifying, because there were so many questions. The main one in my head was, ‘What if my birth mother was raped? What if I’m a product of rape?’ The thought of bringing that up to her and having her face that all over again was horrifying,” Ross says. “When I decided to move forward, there was a whole other list of fears, like ‘What if she rejects me?’ I had to come to terms that it was a possibility. And that happens many times. People will go to find their birth families, and they’re completely rejected. I had to figure out if I was going to be able to handle that.”

It isn’t much of a spoiler to say that Ross ultimately did find her birth family— members of a Navajo tribe— and that she met her sisters, cousins, nieces, nephews, a stubborn half-brother, and her beloved mother who fondly refers to Ross as “my baby girl.”

“I knew that I had to [find my family] because there was a whole culture that I had been taken from. I felt the need to know that and to get in touch with it. The last six years of learning about it have been some of the most amazing years of my life. Feeling that presence has made an enormous difference in how I view myself, and how I live my life.

“It still sometimes feels like a dream that I can just pick up the phone and talk with my mother, and she hears my voice,” Ross adds. “My sister will call and say, ‘Sister, I love you so much. I can’t wait until we see you again.’ That kind of love, affirmation, and support is very different from how I grew up. I crave it, I really crave it.” 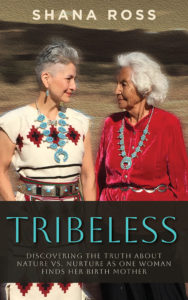 Today, Ross resides in Houston with her wife of 35 years, Mary Beth, and visits her birth tribe in Arizona frequently. With her newfound sense of self and a connection to her birth family (as well as a reconciliation with her adoptive family), Ross looks to the future with a fresh outlook on life. She urges others who wish to seek out their birth families to do so with an open heart and mind. “With all of the DNA companies that are out there, you’re going to find people. It’s almost impossible not to if anyone in your family has ever done a DNA test, so you have to be very clear [in your own mind] that you can handle potential rejection.”

Hoping the book sparks conversation among the various communities in which Ross finds herself, she also hopes to be a source of guidance for others. “We all need to know where we come from. I think it makes us better people to understand that. Even if it’s not so good, it still helps to know who the ancestors are,” she concludes. “It helps us understand ourselves better—and in the process, to be able to relate to those around us in a kinder, more gentle way.”

Tribeless: Discovering the Truth about Nature vs Nurture as One Woman Finds Her Birth Mother is available on Amazon and anywhere books are sold.