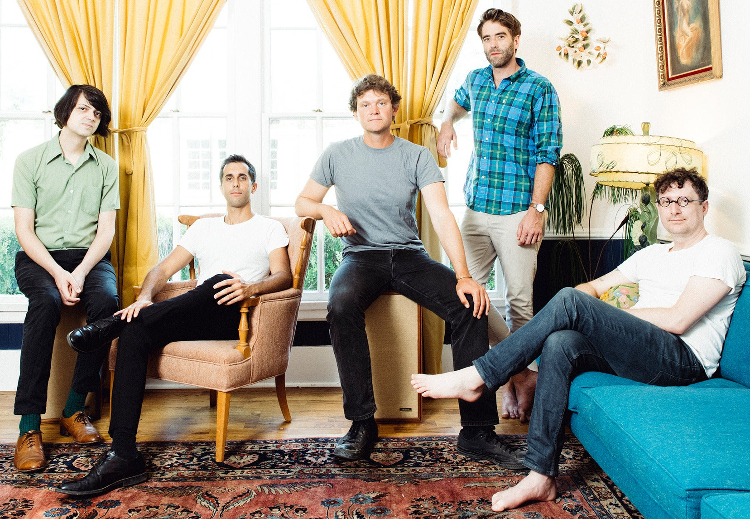 Ramesh (Srivastava), who goes by one name (like Cher or Madonna) is the queer musical genius behind Austin-based Voxtrot, a band whose distinctive Britpop-influenced sound made an impression on listeners over the course of three EPs and one full-length album in the early 2000s. After a 12-year hiatus, Voxtrot has returned to live performance with a current tour. Additionally, Voxtrot’s first two EPs have been combined on one full-length album titled “Early Music” (Cult Hero). Even more archival recordings have been compiled on the album “Cut From the Stone.” Ramesh, himself, hasn’t been sitting idle. Earlier this year, he released his second album, “Eternal Spring.” I recently spoke with Ramesh about Voxtrot and his solo work.

Gregg Shapiro: For the uninitiated, what can you tell the readers about the genesis of the Voxtrot name?

Ramesh: I wish I had a more exciting story, but the Voxtrot name was born strictly out of necessity [laughs]. We had our first show coming up back when I was 18, when we started the band, and we didn’t have a name yet. We had to come up with one within a couple of days. The only other name I remember being put forward was one of the members had put forward the name Birthday Cake because they saw that as a flavor of ice cream in the grocery store. Although I thought it was cute, and there are definitely some cute aspects to our music, especially back then,  I felt it was a little too specific. I don’t know how it popped in my head, but it just came up like that, and I thought, “Well, there aren’t many bands whose names start with V. We do have some stiff competition with the Velvet Underground, for example [laughs], but I said, “How about Voxtrot?” For some reason, the mood of it just seemed right.

Can you please say a few words about the formation and dissolution of Voxtrot?

Yes. I’ll just do it in order. Voxtrot was never really intended to be a band. I had already been accepted to go to college in Scotland, so I was about to move to Glasgow anyway. I had written some songs and I just wanted to record these songs as an EP. So that when I got to Scotland, that would kind of be my calling card, that I would start a band there. I put this group of musicians together that summer before leaving, and we recorded five songs. They’re somewhere on the Internet, but they were never officially released after that. We recorded a five-song EP. Then when I was coming home for Christmas or the summer, we would get together and play again. It just slowly over a course of a few years organically grew and then eventually just became Voxtrot.

About a dozen years after Voxtrot reached its conclusion, two new collections are being released. The 10 songs on “Early Music” compile the songs from 2004’s “Raised by Wolves” and 2005’s “Mothers, Sisters, Daughters & Wives” EPs in one place, while “Cut from the Stone” does the same for B-Sides and rarities. Why was now the time to release these compilations?

I actually don’t know other than it’s more of just a feeling. It’s come up a lot over the last seven years or so. I’m usually the one that says no, because I was working on my solo career, and I didn’t feel it was right. But, strangely, the same year that I finally released my second solo album, it seemed like the right time to do this also.

You mentioned living in Scotland, and listeners will detect that Voxtrot is influenced by ‘80s Britpop acts. I hear The Housemartins and The Smiths, as well as ‘90s twee pop group Belle and Sebastian, which comes through on “The Start of Something,” for example. In terms of being an Austin-based band, how was Voxtrot’s Britpop sound received?

It’s kind of a hard question for me to answer because I completely hear what you’re saying, and you’re absolutely correct. Most of those things you’re naming are definitely the foundation of the things I was listening to the most when we started the band. I didn’t think that much about how different it was from, for example, the rest of the music happening in Austin, like the Austin indie scene at the time. But I guess at that time though, I feel like that era of British indie music, like the ‘80s era of British indie music, was sort of the gold standard for taste. Esthetically, in general, it seemed like that was sort of the thing everybody was looking at.

So, have you ever heard from Stuart Murdoch or any of the members of Belle and Sebastian regarding, for instance, “Whiskey & Water” on “Cut from the Stone”?

Yes! Once I moved there, I ended up becoming very good friends with the keyboardist Chris (Geddes) first, and over the years have maintained friendships with the whole band. A couple of months ago, when they were playing here (in Austin), Stuart and I recorded an episode of that podcast, “Talkhouse,” where we interview each other, so it was kind of my whole indie life coming full circle.

One of the times I interviewed Bob Mould, he talked about how anyone who was paying attention to Hüsker Dü’s lyrics could detect the queerness in many of the songs. This made me think of “Long Haul” (from “Early Music”) and “The Dream Lives of Ordinary People” (from “Cut from the Stone”). Am I on the right track?

You’re definitely on the right track. But the interesting thing is, I didn’t think of it as intentional at the time. I didn’t think of myself as sexually ambiguous. I thought of myself as totally out of the closet. And even though I wasn’t in the closet, per se, I see in retrospect that I wasn’t really so forthright. Like there was still some degree of shame that was keeping me from being fully out.

When Hüsker Dü first started in the mid-‘80s, having queer lyrics, especially for the audience that the band had, which was younger, college rock music fans, was probably risky. Would you say that Voxtrot had a similar following?

Did you feel like there was acceptance for what you were singing about, 20 years later?

I did feel that there was acceptance. I never feared that our audience was homophobic. Maybe I just feared that the world was homophobic. I feared that for me to truly have a long, successful career as a musician, I didn’t have to be in the closet per se, but I would always use general pronouns. That I could never write a song that is a love song addressed to “he.” This barely ever happens, actually, with even the most famous out gay artists. If you think about it, there are very few big songs where you have, let’s say, a cis-gendered man singing “he” to another man.

That’s true. Would you say that Voxtrot had a gay fanbase of which you, and the other band members, were aware?

I was not really. No, it’s only in this reunion and reissue experience, that I am now aware of this fanbase and have received all these messages from people who were young back then and who are young now, talking about how Voxtrot’s music was an important queer touchstone for them, which is very surprising to me that somehow that essence just came through even though there weren’t that many interviews or statements about it.

How does that make you feel?

It makes me feel great [laughs]. I’ve always said to people, and to myself, that if I ever got a second chance in the spotlight I would be very open about my homosexuality because I had wished that I had that more when I was young and beginning to accept my gayness. That I wish I had more culture and pop culture heroes,

Do you think if you were invited, either solo or with Voxtrot, to play a Pride festival, you would?

Oh, I would definitely do that.

Preceding the Voxtrot compilations, you released your second solo record, “Eternal Spring.” Why was now the time to do that?

That one, because I paid for most of it myself, took me a really long time to make [laughs]. It wasn’t, technically, even ready until this year. I planned to release it two years before that, but then with the vast effects of coronavirus, I was like, “I don’t want to work on this thing for five years and then release it at a time when you can’t tour on it and people’s attention is so diverted.” I ended up waiting until this year and it felt like the right time because it gave me time to make the accompanying video, etc. As a self-sustaining artist, a lot of times it has to do with money. In retrospect, I feel like it did come out at the right time. I feel good about it. But it has a lot to do with how long it takes you to pay for something.

Will you be touring in support of this solo project?

I hope so. We’ve done a little bit in the past. Me and the band that plays with me as the solo project, we’ve done about three separate two-week tours. I know from experience, there is a point where it turns and it becomes profitable, but it takes a lot of work to get there. I put music out and hope that the forces of the universe [laughs] correspond and make it to where I can have a profitable tour.

That’s a great question. Between those two choices, I would describe myself as a political person because I feel passionate about the need for change, especially where I am here in Texas. Beyond going to protests that are meaningful to me or making sure to vote and using whatever social media platform I have to support the idea that other people should also go out and vote, I have not taken much political action beyond that. I guess I’ve never got really involved in any grassroots campaigns or anything.

I can, yeah. I feel like the thing where I would be the most useful is if I had a big enough platform where I could perform at something that is a fundraiser for a candidate or a cause that I care about, or a march or event or something like that. Other than using the platform I have, to promote ideas that I believe in, that seems like the most useful thing that I could do.

Voxtrot performs on November 12 in Austin at The Mohawk.