Dame Ethel Smyth’s 1906 opera The Wreckers takes the stage at Houston Grand Opera in its first-ever full scale production by a major US opera company.

Smyth, an English composer who helped popularize opera in Great Britain (and the first female composer to be made a dame), was open about her bisexuality and had notable affairs with well-known women including author Virginia Woolf and suffragette Emmeline Pankhurst.

“She was so pro-woman,” Louisa Muller, director of The Wreckers, says. “Part of that played out in her romantic relationships, and she would have these really intense, fascinating long relationships. She talks a lot in her letters about how she felt sort of a special feeling for women, in a different way than she could ever feel for men.”

Set on the Cornish coast in the late 1700s, Amanda Holden’s English translation of The Wreckers follows Thirza (played by Sasha Cooke), whose husband, the preacher Pascoe, instructs their coastal community to pillage the ships that wreck on the nearby rocky shores. Thirza opposes her husband’s instructions, and when it is revealed that someone has been warning the ships to stay clear of the coast, the community searches for the traitor in their midst.

“[It’s] the story of the community itself, and the sort of groupthink, mass hysteria, and mob mentality that can happen in an insular community,” Muller notes. “But then, inside of that is this really intimate story of our main protagonists, who try to [survive in a] community whose ethics and morals are so different from what she believes in.”

According to Muller, Smyth’s “pro-woman” perspective extends beyond her personal life and onto the stage through her compositions.

“That absolutely plays out in the way these female characters are written, and in the general theme of fighting against a patriarchal society and striking out to make your own place. That’s such a big theme in The Wreckers, and was absolutely a theme in her life, as well,” Muller emphasizes.

Especially with this being the first full-scale production of The Wreckers by a major US opera company, Muller says that HGO’s priority is making sure their production does justice to the piece.

“[This show is] going to be the first time the majority of the audience will have seen or heard The Wreckers,” Muller says. “So I think we’re feeling the responsibility to make sure we’re doing Smyth justice and really presenting the piece at its best.”

Muller describes Smyth as an outspoken woman who lived on a big scale. “When we think about what women’s lives were like in the 19th century, we have some idea of the constraints of it. It’s a pleasure to read about this woman who was living on a big scale and being totally herself and carving out this space for herself.”

Muller believes that it’s important to look back at “trailblazers” like Smyth, who helped establish opportunities for women in the arts. “As a musician, thinking back to all of the privileges and opportunities that I have now, knowing about her feels really important.”

Audiences can expect to see an HGO production design rooted in the natural landscape of the Cornish coast. Muller, along with set and costume designer Christopher Orem, and Marcus Doshi, the production’s lighting designer, explored the Cornwall countryside by looking to 19th- and early 20th-century artwork for inspiration.

“Cornwall’s light is really special, and the landscape is unique,” Muller says. “There’s all kinds of amazing paintings that give us the real picture of daily life in these coastal communities—how they looked and what kinds of activities they were doing.”

Muller brings her training both in theater and vocal performance to every production she’s in. “I’m using all of my background all the time. I feel like I’ve found the perfect job to really use all the things that I studied,” she says.

In approaching a show, she prioritizes collaboration where everyone involved in the production feels like they can take artistic risks.

“I think the real, deep conversations that you can have in a rehearsal room are my favorite thing. It’s always really important to me to create a space where everyone feels like they can take risks and try things and fail and look silly,” Muller explains. “I’d like a safe place to do that in rehearsal so that we can build something that’s better than what I came up with on my own, or that they came up with on their own. Collaboration, for me, is the most important and fulfilling part.”

Having collaborated with HGO in the past, Muller is pleased that several of the production’s cast members are “homegrown HGO singers.” And she’s excited to return to her Houston HGO roots, both to direct The Wreckers and to enjoy the city’s food—particularly Tex-Mex. “It’s the best food town. I’ve already got my list going,” she admits.

“This production is sort of a homecoming for me, because HGO is where I got my start as a stage-management intern many years ago, and I then lived in Houston for a long time,” Muller says. “I’m just really looking forward to being back in a place that still feels like a home, and the pleasure of having some full-circle moments in the place that really gave me my first opportunities.” 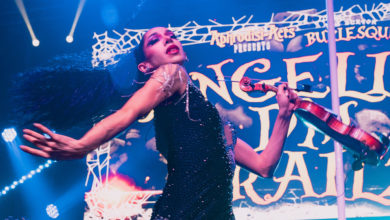