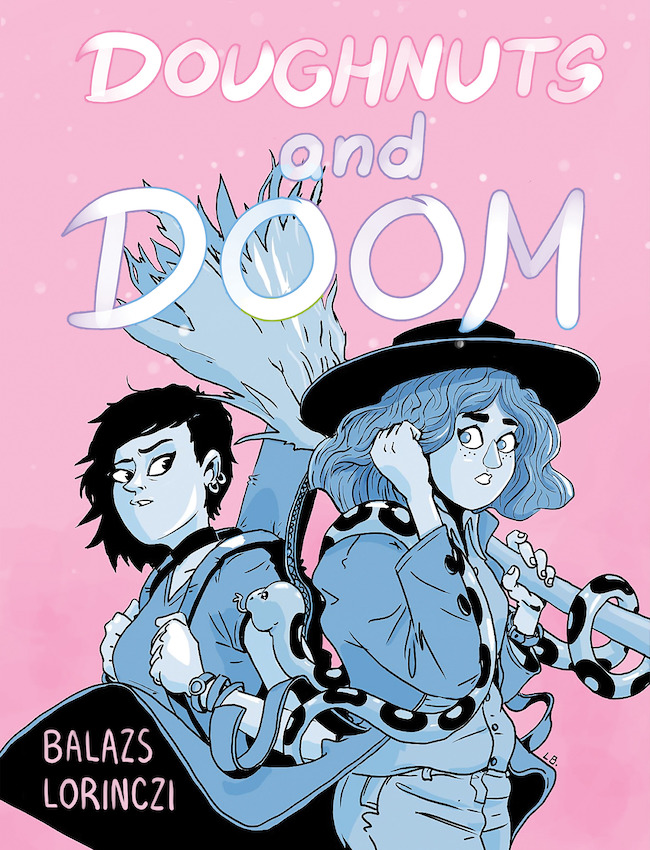 The young adult graphic novel Doughnuts and Doom by Balazs Lorinczi is as sugary-sweet as the title suggests. Illustrated in shades of blue and pink, the graphic novel follows Margot and Elena as they’re drawn together by magic, mishaps, and music. This LGBTQ romance is a perfect casual read for fans of young-adult romance, even while it struggles to meet its own potential.

When the young and frazzled witch Margot Grapes fails her spell license test again, she decides to “bury her sorrows in a pile of sweets” at the local doughnut shop where aspiring rock-star-by-night Elena works. Elena is stuck with the unenviable job of telling a frustrated witch that her favorite dessert is unavailable.

Margot doesn’t take the news well. A tense exchange turns to barbed insults, causing Margot to lose control and unknowingly curse a doughnut that Elena eats. That sets off the chain of falling dominos in the novel’s twist on the meet-cute trope.

Described as an enemies-to-lovers romance, Doughnuts and Doom is a quick read, so the shift from belligerent customer and tired service worker to lovers is a speedy one. This stifles the character development, and, despite early hints of chemistry between the characters, the romance feels rushed at times. There is so much going on all at once with multiple subplots and side characters that the budding romance between Margot and Elena gets lost at times.

Additionally, details like Margot’s loyal, magical snake companion, her potions business, and her struggle to get her spell license hint at a complicated fantasy world that readers aren’t given the chance to grasp. The plot development, while cute, wasn’t as fulfilling as one may have hoped for. Perhaps that is the real goal of a genre that suffers from a lack of LGBTQ representation.

Besides that, the illustrations—in all their candy-colored glory—fit well with the material. It is a well-drawn graphic novel that successfully endears readers to its drawings. Despite its struggles, Doughnuts and Doom’s charming graphic style makes it a worthwhile LGBTQ romantic comedy with a seasonal ‘witchy’ touch as the Halloween decor rolls onto the store shelves.