As the saying goes, art imitates life. For out-and-proud Houstonian Fernando Dovalina, that idiom rings doubly true. The 80-year-old will mount two staged productions this summer that will hit close to home for many in the LGBTQ community: Emergency Room and Mysterious Ways.

Both plays revolve around the core idea of unexpected revelations. In Emergency Room, a young gay man rushes into an emergency room hoping for good news about an ex-boyfriend. In the waiting room, he encounters a Southern Baptist woman who is there to find out what has happened to her husband. Their exchanges are pointed and uncomfortable, but also often humorous. They’re an unlikely pair, but in their shared humanity, they find out they’re not all that different from each other.

In Mysterious Ways, a homophobic right-wing preacher dies and discovers, to his utter dismay, that God is African-American. Not only that, but God likes Ellen DeGeneres. Through their interaction, God tries to show the preacher that he has been too judgmental.

Dovalina feels these scenarios are relatable, and can serve as an allegory for a multitude of challenges faced by LGBTQ folk.

“Almost everybody knows somebody who is a member of the LGBTQ community. Some of them may be loved ones who are not willing to talk about their sexuality because they already have gotten the message from their family or home that ‘We don’t want to hear about it.’ But when it comes down to it, I think in most cases, families are about staying together,” he notes.

It’s that same kind of gumption to survive life’s unexpected turns that is revealed in Dovalina’s plays. While he didn’t take up playwriting until later in life, he spent more than his fair share of time as a reader and writer. He served as a reporter and copyeditor for The Daily Texan, during his years at the University of Texas at Austin. He also worked as an assistant managing editor for the Houston Chronicle.

Upon his retirement, he took continuing-education courses at Rice University and the University of Houston. At UH, he studied under notable names like Stuart Ostrow and Edward Albee. Ostrow’s roster of original award-winning Broadway and West End productions includes M. Butterfly, which won the Tony Award for Best Play, Pippin, and 1776, which received both the New York and London Drama Critics Awards, as well as the Tony Award, for Best Musical. Albee is a Tony- and Pulitzer Prize-winning playwright perhaps best known for penning Who’s Afraid of Virginia Woolf.

“Albee was very encouraging. He told me I was a fine writer, and I’ll never forget the use of the term ‘fine.’ So, I kept writing and then started submitting my work to local theaters, and several of them were accepted and produced,” he recalls.

Considering his pedigree, it is no surprise that Dovalina’s creative works have been well received. He wrote the book for a composer/lyricist’s work based on Tammy Faye Baker, titled The Gospel According to Tammy Faye, that earned not only a fan following but also the attention of the titular televangelist. 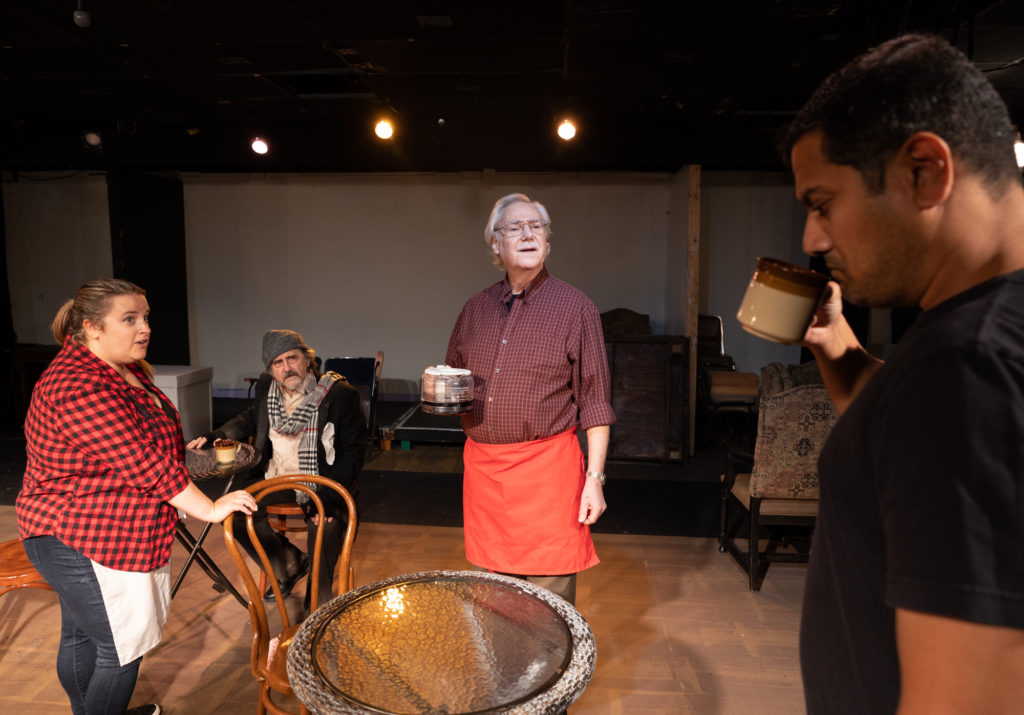 “When we finished it, we got to meet her and interview her,” he says. “That show went to the Cincinnati Fringe Festival, and it’s been done either as a reading, a stage reading or industry reading in a half-dozen states.”

Adding to his peer-recognized success, this summer’s Emergency Room is one of five 20-minute one-act plays that Theatre Southwest will stage as part of its Festival of Originals. The production was selected from among more than 700 entries in a worldwide competition.

Adding to his recognitions, he recently accepted the Griff Singer Award from the Friends of The Daily Texan, for his work at the UT student paper and later as a visiting instructor for the editors and reporters at the paper. The award citation also celebrated his lifetime achievements in journalism and theater.

In his acceptance speech, Dovalina credited his husband for much of his success. When he mentioned that they had been together for 52 years, the crowd (made up mostly of more-than-50-year-olds) broke into applause.

Just as Dovalina has been showered with love for his work and his relationship, he hopes his plays will help people see the interconnections we all have.

“The plays, by themselves, are just fun plays. There’s comedy in them, although they’re both fairly dramatic. In one, a man just faced his death, and in the other, a man and a woman face the possible deaths of [someone they] love,” he reflects. “But there’s a lot of humor, just as there is a lot of humor in life—even dramatic life. I can remember some of the funniest moments that I’ve ever experienced at funerals, and that’s the way life is. You can separate the humor and the sobering moments, but then there’s the idea that we’re all in this together, and we ought to explore ways of finding things that keep us together rather than finding things that keep us apart.”