Since the debut of Laverne Cox on Orange Is the New Black in 2013, the avenues of expression for trans and nonbinary artists have expanded kaleidescopically year by year. Elliot Page holds sway over Netflix audiences; Kim Petras forges her own pop iconography; Janelle Monae shapes the music of the future; and, on comedy stages, runways, and salons, the comedian and poet Alok Vaid-Menon blasts the conversation of gender politics into the 22nd century.

Outfitted exuberantly and commanding a cogent and immediate language that is perfectly suited for a social-media audience with no attention span, Vaid-Menon transmutes academic Aquarian philosophies of freedom to young generations ready for change.

Many know Vaid-Menon from viral clips of speeches, dialogues, and podcast appearances in which they speak profoundly on the human toll of gender oppression. But true fans also enjoy the spirited, saucy comedian as someone who is delighted to poke fun at the current world order as a means of bringing it down.

On June 20, Vaid-Menon hits Houston’s Secret Group as part of a summer tour with opener Whatever Mike. Vaid-Menon, who was born and raised in College Station, is returning to Texas just as abortion rights (and even drag performers) are being threatened by State officials.

OutSmart spoke with Vaid-Menon about the inspirations for their comedy, the new tour, and the impact of returning to Texas.

David Odyssey: You grew up in Texas. What is it like to return?
Alok Vaid-Menon: It feels wonderful. Growing up, I felt like everything I was—brown, queer, trans, not Christian—didn’t belong in Texas. But now as an adult, I’m able to connect with so many people and communities like me across Texas. It’s healing for me, and feels like I’m re-integrating so many parts of myself that I thought were incompatible. Sharing my work in Texas means the world to me, perhaps more than anywhere else I get to share it, because this place gave birth to me. It’s such a deep and integral part of me. And with all of the rampant discrimination against trans and gender-nonconforming people in Texas right now, I feel a deep sense of duty to show up, share my story, and advocate for change.

In 2019, you hosted a Pride celebration at College Station, where you grew up. How did it surprise you? Do you feel like the world you grew up in has changed?
That Pride party will go down in history as my favorite Pride ever. It was the 50th anniversary of Stonewall, and I wanted to bring the movement home. People drove in from across Texas, and for a few hours we made College Station a little queer utopia. I was surprised by the interest and the demand for these kinds of spaces. It was a reminder that there are queer people everywhere yearning for places to be free.

I actually went back and lived in College Station for almost a year during the pandemic, and it was remarkable how much has changed since I grew up there. I was at the doctor’s office wearing a shirt that said Call Me They, and a nonbinary person came up to me and said that they also used they/them pronouns. We just bonded right there on the spot. I never would have thought something like that could have happened when I was younger. I’m just so proud of the strides that trans and gender-nonconforming people have made all over, and about the space that we have claimed. I grew up thinking that we were impossible, that people like me didn’t exist. And now we are more visible than ever. 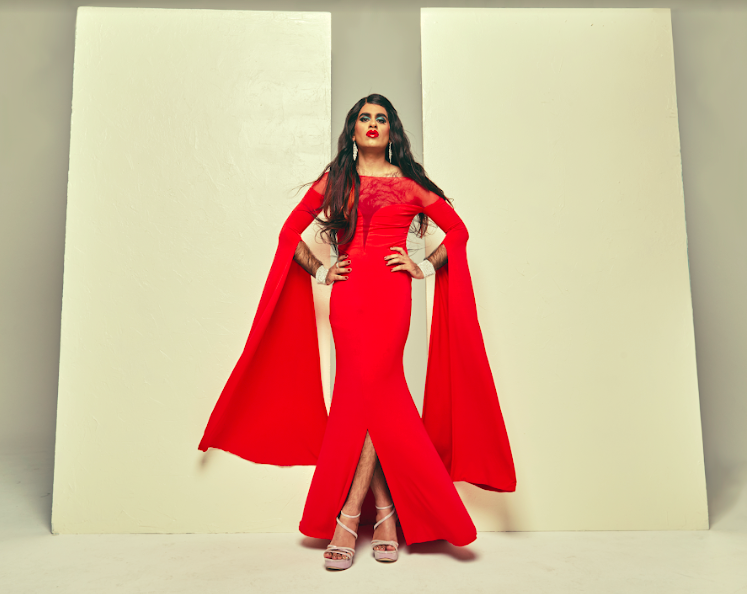 How would you describe your live audiences?
They really vary across venues and across locations, but some common threads are the empaths and creatives. People with big hearts and ideas. And bigger laughter. People committed to doing internal work to make a better world on the outside. People who believe in love.

Many people know you as an activist and public speaker. How would you describe your comedian side? How does it challenge the “serious” image people may have of you?
Anyone familiar with my work knows that I am deeply opposed to binaries. I hate how we’re expected to compromise levity in order to establish gravity; sacrifice joy for the sake of urgency. In my shows I weave between talking about some of the most important issues of our times and being flippant about fake eyelashes. All of it is essential because all of it is honest talk about what it means to be alive. My comedic style is informed by the history of queer and trans performance—camp, darling! [Queer performers have] always found ways to make political commentary while still being entertaining. It’s about saying, “You think I’m funny because of what I look like, but how about what you act like!”

As always, it feels like a very fraught, depressing time, especially in Texas. Where do you find the inspiration to let humor break through the grimness?
I suppose I find inspiration precisely in the bleakness. That’s how I’ve always survived. When things are hard, I crack jokes to loosen their stranglehold on me. Humor has always been a survival strategy for me—a way of assuming control, of staving off collapse, of sustaining my spirit. In my own life I’ve seen how humor has kept me afloat, and I hope to model that for others in my shows.

What has been the ethos of this tour? And what have been the biggest surprises?
This tour is all about affirming trans and nonbinary joy. Creating space for people to feel the full spectrum of their emotions, from sorrow to delight.

Phillip Pullman has this quote that I love: “Poetry is not a fancy way of giving you information; it’s an incantation. It is actually a magic spell. It changes things; it changes you.” I really do believe in the power of oral tradition. Speaking words changes lives. I want to create a glimpse of the world I’m fighting for right here in the now. I want to show people what freedom feels like.

It’s become de rigueur to feel pessimistic or cynical about Pride Month. How do you deal with that, or work through that?
I’ve done a lot of work in myself to stave off cynicism and choose hope. I’m really inspired by the work of Rebecca Solnit, who says that both optimism and pessimism require a presumption of what the future holds. She has hope because she doesn’t know what the future holds, so she chooses to be hopeful. That makes a lot of sense to me—finding possibility in the unknowability of it all. Also, reading history continually gives me hope. We often feel like what we are going through is unprecedented, but it rarely is. I know that people in the past have felt the same pain and suspicion and sense of fatigue as me. And so I study how they crafted lives anyway. And that makes me feel less lonely in it all.