With her bright and shining personality, Sunny Bryant has a name that couldn’t be more fitting. At just 9 years old, the Houston transgender girl is a beacon of light for the local LGBTQ community and beyond.

In the five years since she began her transition, the third-grader has become a force of nature. She has traveled to Austin six times to publicly address the wave of conservative legislative attacks on trans rights. Last year, she went viral for speaking out against the record number of bills filed during the 2021 Legislative Session.

“Hi, my name is Sunny Bryant, and I am kind of famous now,” she told legislators at the Capitol in October. “Not for something great like winning a spelling bee or mutton-busting at the Houston rodeo, but for being myself—publicly. Something I never wanted to do. Something most kids don’t have to think about.”

“I should be in school today,” she continued. “My first visit to the State Capitol should have been on a school field trip, not to defend my right to exist. But if I do not show up, you won’t get to see the real story. I think you need more trans people in your lives. Every time I meet new trans kids or adults, my heart grows. Don’t be a grinch, let your hearts grow.”

Thanks to Sunny and hundreds of other advocates, dozens of bills targeting the LGBTQ community—particularly trans children—failed. Only HB 25, which prohibits trans students from joining school sports teams that align with their gender identity, was signed into law.

Despite multiple failed attempts during the Legislative Session, Republicans continued attempting to ban trans youth from having access to safe, life-saving, and gender-affirming medical care such as puberty blockers and hormone replacement therapy.

With the help of her parents and LGBTQ organizations like Equality Texas and the Transgender Education Network of Texas (TENT), Sunny continued to advocate for herself, her family, and other trans youth. She was soon recognized by U.S. Representative Sylvia Garcia (D-Houston), who honored Sunny and her family by inviting them to be her virtual guests at President Joe Biden’s State of the Union Address in March. One month later, the Bryants were invited to the White House to participate in Biden’s Easter Egg Roll.

“I’m so proud of her,” Sunny’s mother, Rebekah, says. “She’s so resilient. I don’t know that she realizes the impact she has and the power she holds in her teeny-tiny little body and voice. It’s part of why we allowed her to start testifying.”

Rebekah explains that she first visited the Capitol to testify a few times by herself before she and her husband decided Sunny was ready to speak in public. “Every time I went, she begged to go with me,” Rebekah recalls. “We didn’t know if we wanted her to have that exposure. Those videos are permanent, and they’re going to be out there forever.

“When she first spoke at the Capitol, I was terrified for her,” Rebekah continues. “But she knocked it out of the park. She was so good. She had all of these Republicans smiling ear-to-ear because she’s funny and knows exactly who she is. After that, [I realized] she could do it and make an impact. She’s a natural.”

“The first time it came up, I was buckling Sunny into the car seat when she said, ‘Why did you make me a boy? I wanted to be a girl.’ I replied ‘me and daddy didn’t have a choice, it wasn’t up to us.’ I didn’t think much more about it.” Chet was also unconcerned. “He figured she was in some sort of phase.” Neither parent had yet considered that their child might be a trans girl. 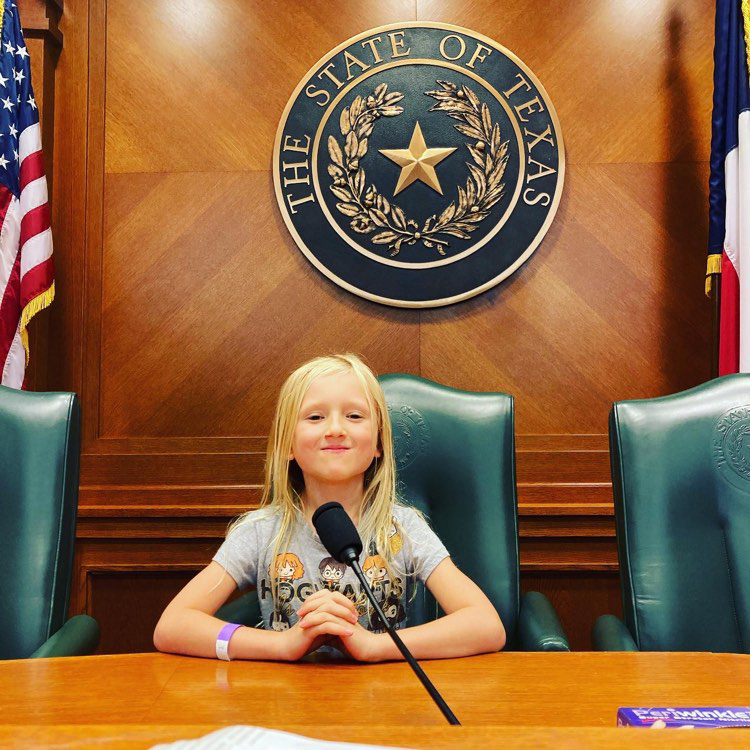 “Sunny persisted in her declarations, and we both grew anxious but Chet had the most difficulty,” Rebekah says, noting that Chet grew up in the conservative deep South. “He is a wonderful, loving father with the best interests of his child at heart, and he soon grew to embrace his daughter. Today, he could not be prouder of Sunny.”

The Bryants are looking forward to celebrating Pride Month as a family this year by riding on a friend’s float in Houston’s annual Pride parade on June 25. Sunny’s school will also fly a Pride flag for the second year in a row.

“Last June, the school put the Progress Pride flag up for the first time, and Sunny said ‘Oh my God, that’s my flag!’ because she was so excited to see her colors represented,” Rebekah says.

“I show my Pride year round, so it’s not just about June, but it is a fun month [with] opportunities for people who may not feel seen to [experience being] represented everywhere.”

Sunny and her younger brother, Bodhi, love to roller skate. Sunny also enjoys playing softball, tennis, and soccer, and she hopes to try rock climbing soon. Her favorite subjects in school are math and Spanish, and she serves as one of her school’s “anti-bully” leaders.

As for her future goals, Sunny is actually considering two different career paths. “I want to be someone who helps people and kids like me in the LGBTQ family—or a park ranger.”