When Black Lives Matter: Houston co-founder Ashton P. Woods began organizing a BLM protest for the National Rifle Association’s Houston convention in response to the tragic Uvalde elementary-school massacre, he may have underestimated the outrage that is building against the NRA and its featured speakers.

There are now eight organizations that will join with BLM for the May 27 protest at downtown’s Discovery Green, across the street from the NRA’s meeting at the George R. Brown Convention Center. Several other groups are planning protests in the street.

“For children to be murdered—on an election day, no less—and our government allowed that, is outrageous,” Woods says. “We have to vote, and we need to hold the government accountable. We all have the right to exist.”

As the world was rocked by the May 24 shooting just 280 miles from Houston, it didn’t take long for the backlash against the NRA to begin. Petitions signed by thousands of Houstonians demanded that Mayor Sylvester Turner cancel the NRA convention where former President Donald Trump, Governor Greg Abbott, Senator Ted Cruz, and other elected officials who support gun rights are scheduled to speak.

Turner responded on Wednesday by explaining a cancellation would be legally impossible. “The greater question is why are elected officials speaking there, and what message does that send? You can’t pray and send condolences on one day and go and champion guns on the next.”

Gubernatorial candidate Beto O’Rourke also challenged the governor at a heated press conference on Wednesday, saying, “The time to stop the next shooting is right now, and you are doing nothing.”

“I’m still grinning about that,” Woods says regarding O’Rourke’s confrontation. “This is what we need. Make them feel uncomfortable. This is legislated murder. We must kick [the gun-supporting politicians] out in November.”

Woods, who is coordinating the BLM protest with Discovery Green Conservancy, does not expect violence. He says there will be elected officials and victims of gun violence speaking, and voter-registration teams will be on hand.

Woods questions why the governor would even be in Houston this weekend. “He needs to be in his office on Friday, uniting the state and stopping this violence,” he says. “But frankly, I’m not surprised. This is his M.O.”

As a Black gay man living with HIV, Woods is also an advocate for the LGBTQ community and a leader in the fight against police brutality.

“We all have a right to exist,” he says. “I am a pro right-to-life activist, and I don’t mean that in the sense Republicans do. We all have the right to live. Governor Abbott helped pass laws last year that made this easier to happen.” Texas legislators have loosened gun laws, most notably by passing permitless carry in 2021, less than two years after mass shootings in El Paso and Odessa took the lives of 30 people.

Woods is not alone in his feelings.

“I don’t know how many will turn out Friday to protest,” Woods says. “I just expected a few hundred at the rally for George Floyd, and we had 60,000 show up.”

What: We Demand Justice Rally
When: Noon on May 27
Where: Discovery Green, 1500 McKinney St.
Info: tinyurl.com/3w7w9jka 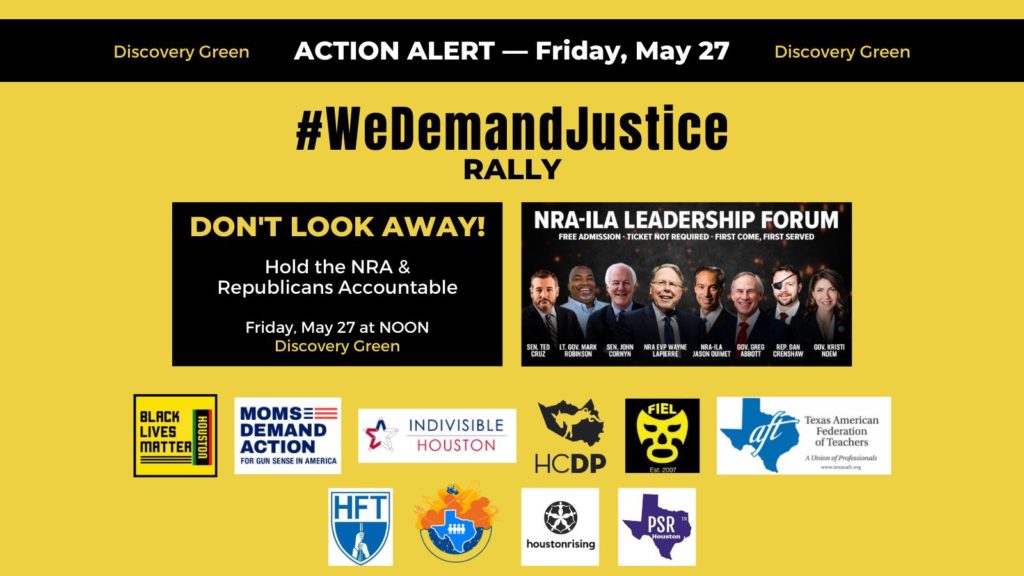