Blake Weisser, doyenne of the Houston chapter of PFLAG (formerly Parents, Families, and Friends of Lesbians and Gays), was born on May 15, 1919, and died on February 17, 2022.

A generation of LGBTQ Houstonians has been impacted by Blake’s ubiquitous 40-year presence at PFLAG meetings and, most visibly, at Houston’s annual Pride parades. Blake and her husband, Gordon, helped thousands of local parents and their families through the reconciliation, legislation, and education work they performed as PFLAG leaders.

Longtime friend Roger Donley remembers Blake with great affection. “When I moved to Houston in the fall of 1995, my first boyfriend’s mother suggested we attend a PFLAG meeting, where I met Blake. Subsequent to that, when she and Gordon were honored as grand marshals in the Pride parade, Blake asked me to be her driver. I ended up riding in the car, but being with them at the event was absolutely amazing.”

By then, Blake was well known among parade-goers. “What Blake loved best was walking along the route,” Donely remembers. “This enabled her to see and hug hundreds of people, all of whom knew her in some form or fashion.”

Her last parade appearance was in 2019, before the pandemic, when Blake participated in a wheelchair that was being pushed by Donley.

“Blake was lots of fun and full of laughs. She loved to play cards and go to shows,” Donley says.

Like many who knew her, Donley echoes a common descriptor of Blake: “She was always open to trying new things and meeting new people. She was very accepting and loving to everybody.”

Blake’s first husband was in the military, so the family relocated every three years. That meant that they were often the “newcomers” in the neighborhood, so being welcoming and inclusive to others was very important to Blake. This trait became one of her core values as she started working within the LGBTQ community. She was always engaged in making sure that people were moving forward with their lives. During World War II, she taught young soldiers basic mathematics so they could return to school after completing their tour of duty. 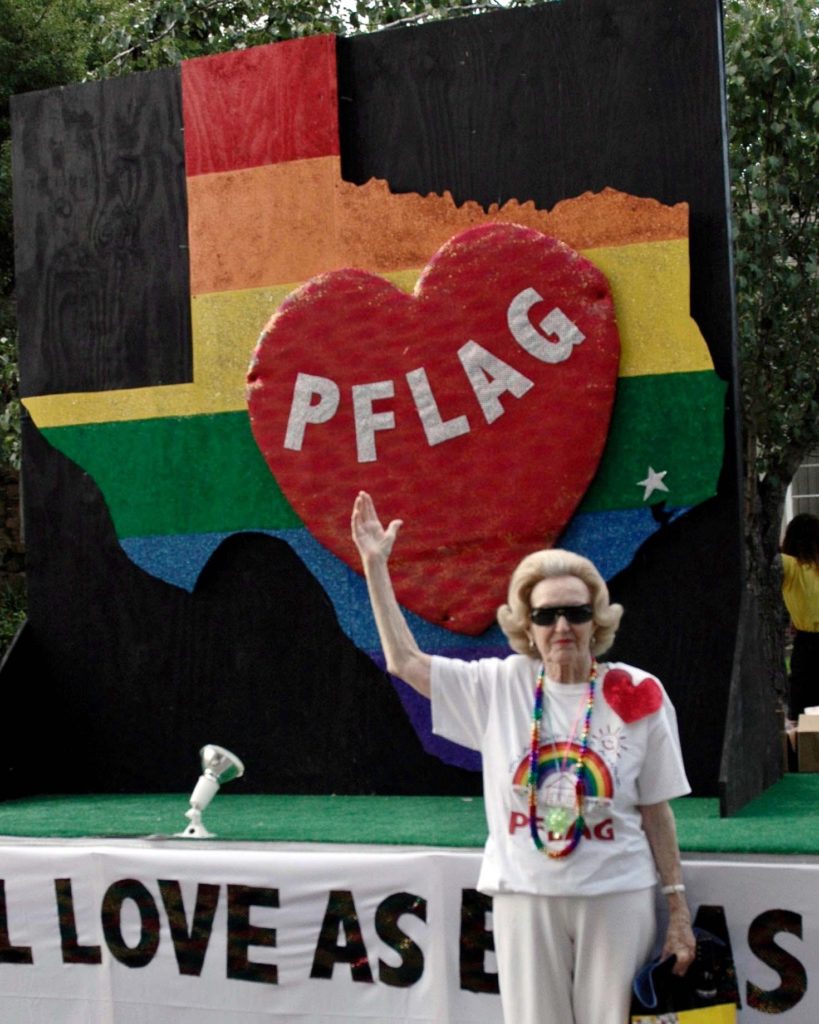 A decade before her introduction to PFLAG, one of Blake’s children came out. At the time, Blake remembers saying, “Don’t expect me to carry a banner or march in a parade.” Years later, she confessed that her views about gays and lesbians “had been in the closet for a very long time.”

By the time Blake discovered PFLAG in the late ’80s, she knew it was time to change. When she and Gordon attended their first PFLAG meeting, they unexpectedly met someone Gordon worked with at Exxon, which put them at ease. Blake always remembered that initial experience, and sought to replicate it for the rest of her life.

Blake’s sphere of influence went far beyond those she met at the local PFLAG meetings. “Years ago, I had a client who was required to attend [Alcoholics Anonymous meetings] as a condition of their probation,” Donley says. “Their probation officer was not a fan of the [gay-friendly] Lambda AA group, and suggested to the judge that the client attend another AA group. When Blake heard this, she was incensed. I asked her to have a conversation with the judge, and she agreed. A few days later, she drove to the courthouse (she was in her 90s at the time) and testified regarding the legitimacy of that particular support group. The judge relented—and then asked Blake for a hug.”

Sara Fernandez, a local LGBTQ activist who has been friends with Blake for 22 years, also came to know her through PFLAG. Fernandez volunteers with the Association for Family and Community Integrity, an organization created by PFLAG parents to address the education and mental-health needs of LGBTQ youth.

Like many, Fernandez remembers her first conversation with Blake. “After calling the PFLAG helpline and speaking to Blake, with her encouragement my husband and I attended our first meeting. When we arrived, she [and all of the attendees] were incredibly supportive. Blake (who had received similar encouragement from Gail and Pat Rickey years earlier) suggested that I become more involved. Blake was passionate about helping people understand and unite with LGBT family members. She was always mindful of the difference PFLAG made in her life.

“She was very active on the PFLAG helpline. We surveyed meeting participants and found that 75 percent of them had their initial contact through Blake. She was often the first encounter for people seeking information about their LGBT family members. When people attended a meeting, Blake would always follow up with a phone call. She was adamant that attendees should be contacted and that we should get their feedback. This made her the catalyst for many important PFLAG relationships,” Donley recalls.

“Blake told one PFLAG newcomer, ‘Join us at the Pride parade!’ And, despite being somewhat blindsided by the request, they did. The following year, that person and her family built the float.” 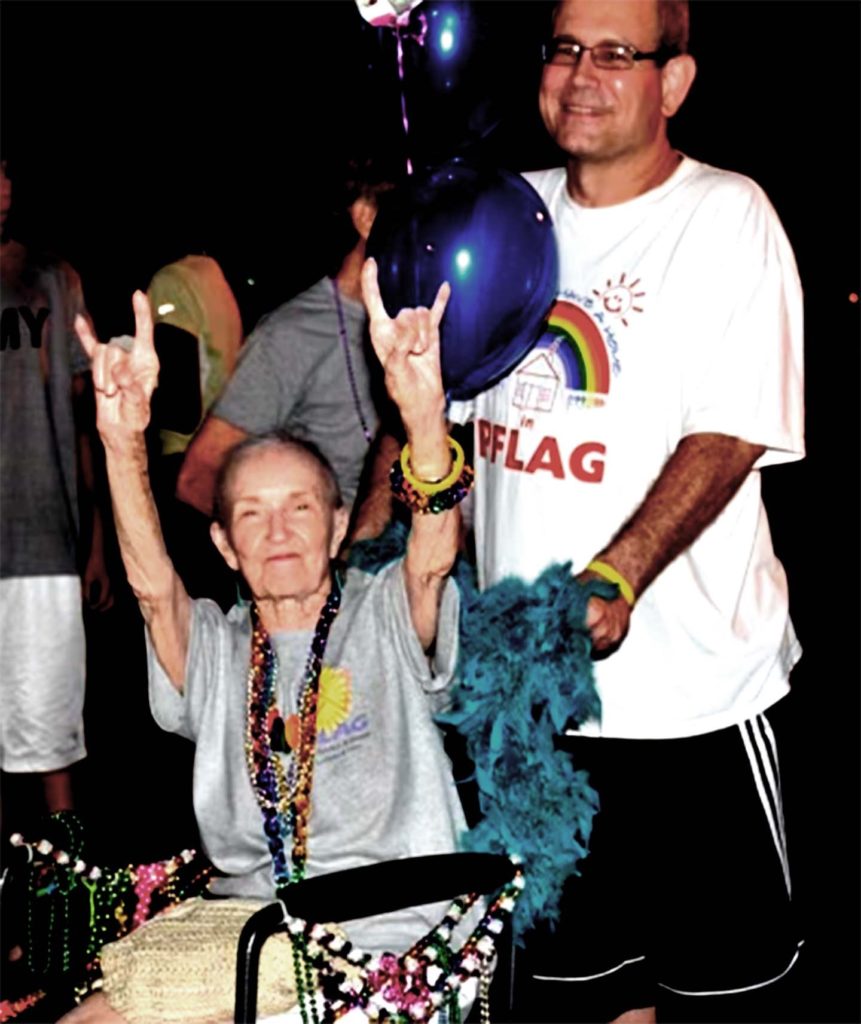 Once she was entrenched in PFLAG, Blake went to work. She, Donna Pinnick, and Kyle Young organized a wonderfully conspicuous trip to Washington, DC, taking a banner-laden bus across the country. Blake knew that as PFLAG parents, their impact on legislators could be significant. Those who participated were very passionate and vocal. They spoke with several politicians, and in a now-famous interaction, cornered conservative senator Jesse Helms, who reportedly couldn’t escape the PFLAG parental posse fast enough.

Decades ago, PFLAG sponsored billboards throughout Houston that reportedly stopped traffic along Houston’s Southwest Freeway. Blake was at the center of that campaign, unabashedly calling people to solicit donations to keep the billboards up.

“She was well aware of her skill set, especially when speaking on LGBT issues,” remembers Donley. “This came from her experience, her passion and, without a doubt, her age. A few years ago, she was flying back to Houston. I was scheduled to pick her up, and she called me and said, ‘If you have any trouble, just tell people I’m 100.’

“Blake was advocating for causes when most people would have been settled into a quiet retirement. She never complained about her age, even though it eventually slowed her down. When Blake turned 100, her family had a big party for her. Some of her grandkids were shocked to discover their grandmother’s significant involvement and history with Houston’s LGBT advocacy.”

“Blake was the genesis for so much positive thought and action surrounding LGBT issues and individuals,” Fernandez remembers. “She was always involved at a grassroots level. So many things flourished from her efforts. Her work provided the foundation for tremendous amounts of growth and healing.”

People who interacted with Blake were often transformed by the newfound feelings of hope that she gave them. Blake personified the belief that LGBT individuals and their families (both biological and otherwise) could be repaired, reunited, and restored.

A memorial service for Blake Weisser is planned for Saturday, May 7, at 2 p.m. at Christ Church Cathedral, 1117 Texas Avenue in downtown Houston. Donations in her memory can be made to Out for Education, a scholarship fund that supports LGBTQ students, at outforeducation.org.