While the tops of many downtown Houston buildings consist of vast expanses of concrete and cooling towers, the new POST Houston entertainment complex is offering a change of scenery with its sprawling rooftop farm, all part of a regenerative agriculture project.

Skyfarm is the latest addition to POST Houston, a hub for entertainment, food, and co-working space located in the redeveloped downtown post office building. Created by the Blackwood Land Educational Institute, the sustainable organic farm aims to combat flooding by reducing stormwater runoff into the neighboring Buffalo Bayou, as well as reduce the urban heat-island effect while creating acres of habitat for pollinators and other wildlife.

“I think that we have an imperative right now to act against climate change, and this is one way of doing that,” Blackwood Creative team member R. Aaron Flores says. “We need to have a much closer relationship to food than we do now.”

Flores, who has been a part of Blackwood for about a year and a half, has closely worked with POST Houston to get the farm up and running. Flores believes Houston is a natural fit for these kinds of agriculture projects.

“Houston in the last couple years has had a lot of people take up the mantle of local and sustainable agriculture,” he says. “Houston is also a very development-friendly city. We still have a lot of space inside and outside the city to utilize.

“The overarching idea for the skyfarm is to educate the public on regenerative agriculture, a conservation and rehabilitation approach to food and farming systems. The hope is that this downtown garden will educate more of the public on sustainable food concepts,” Flores says.

“What we’ve shown is that it’s possible to take an existing building and retrofit it and adapt it to our 21st- and 22nd-century imperatives. Having this farm in the middle of Houston just allows us to have more educational reach and begin to illustrate concepts to the public. We have a duty to try and ‘rewild’ as much of our urban space as we can, so that we are emitting less carbon and sequestering as much carbon as we can in the soil.

“While a one-acre farm can only do so much to offset the carbon footprint of Houston, Blackwood wants the city to become a model of what other metropolitan areas can do with agriculture. For example, one benefit of the skyfarm is that it will help cut down on food-miles by growing the food that many of the local vendors downstairs in the POST complex will use,” Flores says.

Food-miles is the distance that produce is transported from the field to the consumer, and is an important factor in evaluating the environmental impact and carbon footprint of our food. 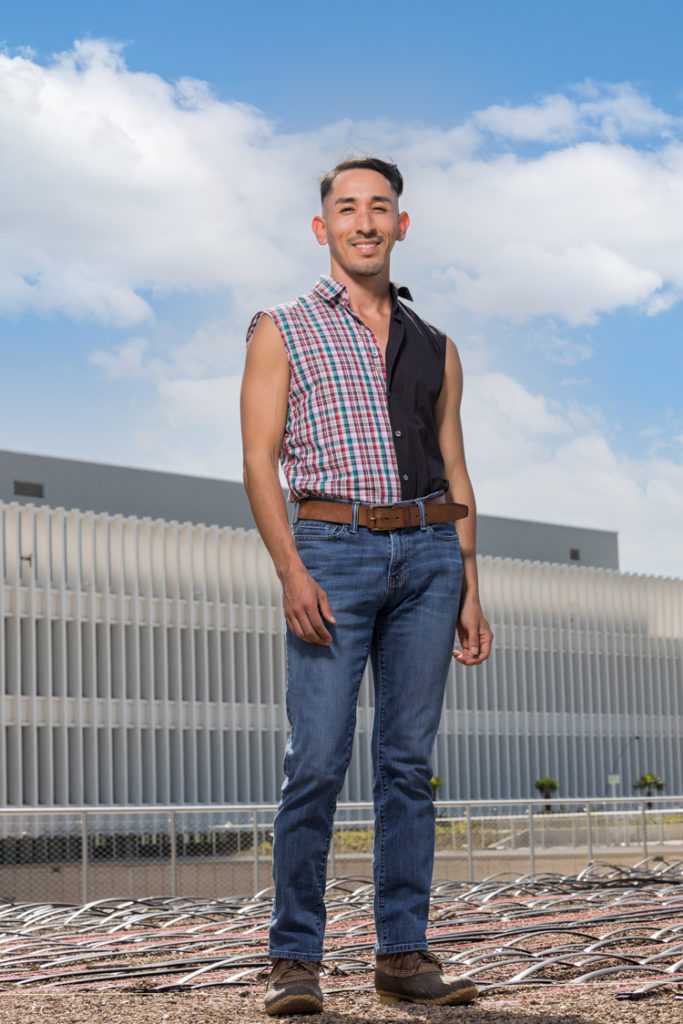 “We already are supplying produce to some of the POST vendors, and there are more vendors coming in,” he says. “Once we have our first crop [harvested], we will be providing more food to vendors there, showing people that the food-miles are zero. We are also going to start a farmer’s market. By keeping all the food within this vast downtown complex, the carbon footprint can be significantly decreased.

“This is a great way to show people that if you were to buy a piece of produce that was grown in [a farm on top of the building you are shopping in], then the food-miles are only going to be the distance back to your house,” he says.

Currently, Blackwood is almost ready to have the garden fully operational and self-sustaining. The last step in getting the garden ready was creating a unique rooftop soil.

“This is still an emerging field, so we had a lot to research,” Flores admits. “We know that only a special, lightweight rooftop soil composition makes this viable. It’s this very interesting type of soil that is 40 percent expanded shale. Shale is the same composition as clay, and clay is wonderful to farm in—30 percent compost, 20 percent peat moss, and 10 percent perlite. That is a very unique composition.”

People should be eating the food produced on the POST rooftop by this summer, and Flores says he hopes it allows people to have a deeper understanding of food.

“I hope that this helps start a conversation with the public,” he says. “People can now know where their food comes from. It is possible to know the people who are growing your food.”

Going forward, Flores, who identifies as pansexual, wants the public to know that the image of the modern farmer is changing, and anyone—no matter their identity or religion—can find their green thumb and become invested in agriculture.

“While farming in the U.S. has historically been a very straight white thing, there’s increasing diversity in agriculture,” he notes. “There are certainly havens across the Houston area where all people are welcome.”