H-Town beer guys Cole Wehner, 35, and Brett Chynoweth, 40, are a Houston couple as committed to local craft beer as they are to each other. After getting married, they even had wedding receptions in two different breweries. Together, they have built a social-media presence as the Htownbeerguys to focus on their beer adventures and each other.

“We actually had two receptions at breweries in Kansas City (where Cole’s family is centered) and in Houston where Brett’s family is centered, along with all of our H-Town friends. The Houston reception was at City Acre Brewing, another great Houston-area brewery that we always recommend!” Wehner says.

Their Instagram profile says it all. If you follow @htownbeerguys, you will discover photo after photo of the bearded duo showing off their favorite beers, breweries, and merchandise. Their photo gallery pops with vibrant colors, big smiles, and scenes from breweries all over the city.

Their first date seven years ago ended with a cold beer at local beer bar Hay Merchant, but it started in Hermann Park at the natural-science museum.

“We first met online, and after talking for a while we met for our first date at the Houston Museum of Natural Science. After spending a couple hours checking out the exhibits and walking around Hermann Park, we continued the date at Hay Merchant to enjoy some beers—and the rest is history. I would say our mutual love for beer was discovered on our first date,” Chynoweth says.

The men have enjoyed getting to know Houston’s beer community, which is unique in how tightly knit and close it is.

“We generally can’t go to a brewery without running into someone we know—not to mention the friendliness of the staff and owners. Each brewery truly feels like a home away from home,” Wehner says.

“The community is such an amazing group of creative, diverse, and accepting individuals, and it’s always cool to see some of the local breweries collaborate with each other. We’ve become close friends with some amazing people that we’ve met through the beer community,” Chynoweth adds.

When asked to name their top-three local breweries, the two agreed on all but one. While they think True Anomaly and Equal Parts are both top-notch, Wehner places Great Heights in his top three while Chynoweth rounds out his list with New Magnolia. 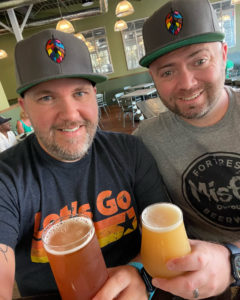 “What makes a great brewery for me is the ability to both brew fantastic beer and provide a friendly and fun venue,” Wehner says. “These breweries exhibit both of those features while also creating a [mutually supportive] community.

And their top-three beers? They’re in complete agreement on Scout, a Mexican lager from True Anomaly; Loggerbier, a German-style Pilsner from Equal Parts; and Hella Pils from New Magnolia.

Throughout their social media and website, it is evident that the couple also makes sure they support local brewers who have an eye on social- and racial-justice issues.

“Social justice absolutely factors into the breweries and beers that we feature [on our social media and regularly] visit. We think it is important that breweries recognize the issues and struggles, both within the industry and within the community to which they belong,” Wehner says.

According to the men, beers like Brave Noise and Black Is Beautiful were created to support various social-justice movements. Brave Noise is a beer that  brewers across the country have brewed and sold in order to benefit charities supporting women, BIPOC, and LGBTQ people throughout the beer industry. Black Is Beautiful was initially created by Weathered Souls Brewing Company in San Antonio. The brewery made the recipe widely available for any brewery or home brewer around the country to brew and sell, with the understanding that all proceeds go toward racial-justice charities.

“These sorts of things are incredible to see in the community, and we proudly spread awareness on our platform. The past couple of years have shown that while we have come a long way in this country, we still have a long way to go to make sure each one of us feels accepted, welcome in our community, and that we are all treated equally,” Chynoweth says.

Houston also has a handful of breweries that brew to create the kind of change these beer guys support. “Lavender Bunny, from Eureka Heights Brewing, is brewed during Pride Month, and one dollar per pint is donated to support resources for Houston’s LGBTQ+ community, including the Montrose Center. Based on sales and donations from their partners this year, they donated over $20,000 to the community. And Haze Not Hate, by Great Heights—everything about this beer is perfect, and the fact that it is brewed in support of the community is simply amazing. It all makes us so happy and proud to see,” Wehner says.

This ambitious couple is not currently planning to open their own brewery, but they hope to someday open up a place in their neighborhood with two or three taps. That would allow them to showcase some of their favorite breweries and introduce even more people to the craft-beer community that they love.