New York-raised Enita Torres was brought up Mormon, married a man, and gave birth to two children before she moved to Texas in 1982, divorced, fought a custody battle, and fell in love with her future wife. She had experienced more by age 28 than most people do in a lifetime.

Torres’ first job in Houston was at the University of Houston’s M.D. Anderson Library. Unbeknownst to her, her future wife, Barbara Ervin, also worked at that library. This is where Ervin first spotted Torres in the stacks and knew there was something about her. It was love at first sight.

“When I first saw Enita I remember going, ‘Holy shit, who is that?’ Ervin gushes. “And then the next day, I saw her go into the office, where I knew there was a back entryway. I snuck in to ask a friend of mine who she was.”

Torres caught Ervin skulking about and spoke to her, which left Ervin dumbstruck and at a loss for words. Ervin then worried that Torres might have taken her silence as a sign that she wasn’t interested. “I’m just not very forward,” Ervin admits.

Could romance possibly blossom between the two? Initially, according to Torres, the answer was no. Her ex-husband was also in Houston, and he decided to wage a custody battle for their children. “I knew that my ex-husband was getting skittish about my sexual orientation. I was avoiding women because I had previously been involved with another woman, and he got really awkward.” Because of the custody battle, she knew she couldn’t be seen in a casual relationship with a woman. “So instead, we kept a friendship,” Torres explains. 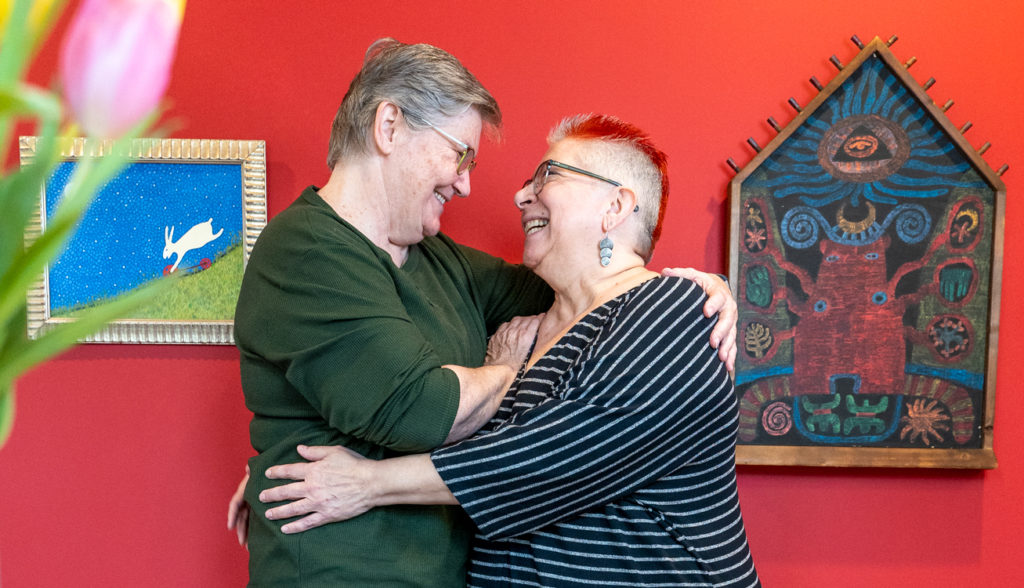 But eventually, Torres softened and started coming around to the idea of allowing something more with Ervin. “How often in your life are you going to meet someone that you feel this way about?” Torres remembers thinking. “We started hanging out by taking our breaks together, and I was getting smitten.”

Ervin explains how Torres’ children actually brought the couple closer together. “After the first couple of dates, Enita said, ‘I need to let you know I have children.’ She showed me the pictures, and I knew those kids!” Ervin had gotten to know the children at the home of a mutual friend who was Torres’ babysitter. That scored bonus points in Torres’ eyes, as her children’s well-being surpassed all other priorities.

As their relationship grew, the bitter custody battle with Torres’ ex-husband weighed heavily on the couple. “That was basically the environment for almost the first two years of our relationship,” Torres recalls. “We could not live together. This was the late 1980s, and I was basically told I need to be in the closet in a big way [in order to keep the children]. We were incredibly careful to not be seen as a couple.”

But they still spent time together every day while concealing their relationship publicly. They would occasionally take the children to a park, or Torres would visit one of Ervin’s softball games.

But the question still lingered: could their relationship last if the children’s future was on the line? At one point, they considered separating out of concern for the children’s welfare.

And then, for some unknown reason, Torres’ ex unceremoniously dropped the custody case and left town. It was an immediate change for the women. They started living together, and rested easier knowing they didn’t have to hide their relationship anymore. 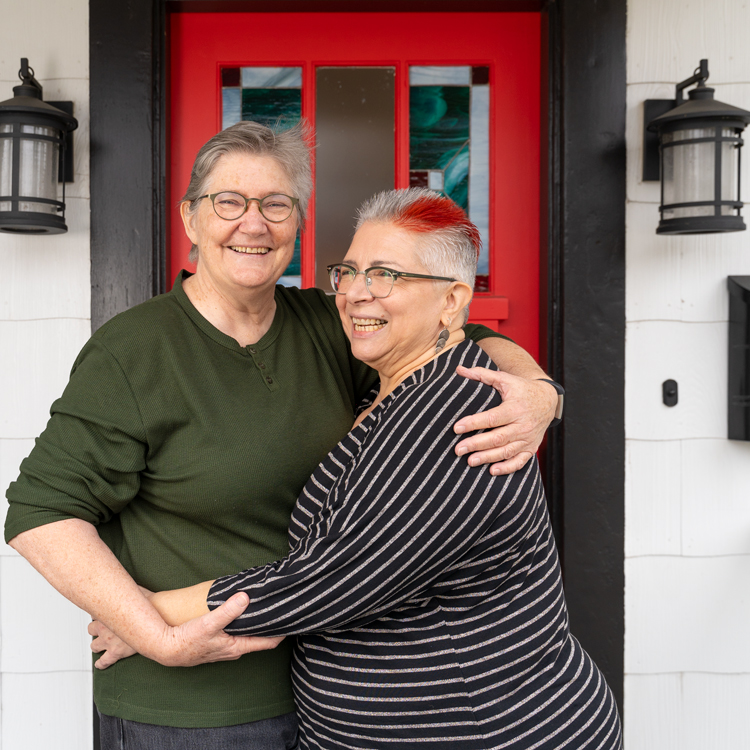 “We had been in fight mode [for our relationship to last. After so much] conflict and constant fear, I wondered how we were going to function in normal mode,” Torres recalls. “But it was amazing! We fell into being really good co-parents and partners.”

The years went on with both women being happily involved, raising a family, pursuing their careers, and owning a home. After being together for 10 years, the couple decided to hold a commitment ceremony in 1996. And when their relationship hit the 30-year mark, they threw a blowout celebration with 200 guests.

Aside from traveling, they truly enjoy the small traditions they’ve kept throughout their 35-year relationship. “We still have some things that we’ve kept, but not in the same time frame. In other words, one of the wonderful things [about retirement] is not setting an alarm. We go to sleep when we’re tired. We wake up when we’re done sleeping. We have our morning coffee, and we work the crossword puzzle. We did it every morning when we were working, and we still do it now,” Ervin brags.

But one dramatic change does come to mind as Ervin reflects on their happy retirement together: “No more shopping at the grocery store on the weekends!”